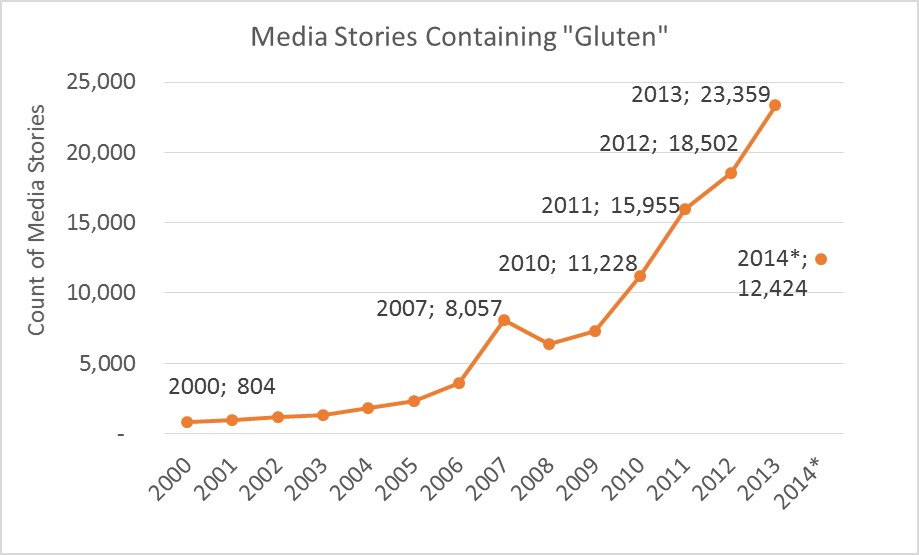 Walking down a grocery aisle you are almost guaranteed to find a few “Gluten-Free” labels. Recent diet trends have raised awareness of gluten in diets. The other day I even found corn starch sporting a gluten-free label.

While the verdict is still out on the long-term implications of this trend, it’s worth taking a few moments to consider what has been going on.

One way to measure a trend is how frequently the topic is mentioned in the media. By searching the number of times “gluten” was found in media reports from 2000 to May 2014, a story starts to emerge. In 2000, 804 media hits for gluten were observed. The trend grew slowly, initially. After a surge in the number of stories during 2007, the level of gluten media hits was nearly ten-times that of 2000.

In 2008 the number of annual gluten stories decreased slightly. And while I am in no way suggesting causation, it’s important to point out the Great Recession started December 2007 and ended June 2009.

Another method for measuring the concern and interest in gluten is from Google Trends. For proprietary reasons, the count of search is not reported. Instead, a relative number is reported. For example, if 1,000 Google searches for “gluten” was the highest reported weekly interest, that would be a relative interest score of 100. A week’s Google search count of 890 for another week would then be reported at 89.

From Google Trends, it was observed that interest has been increasing, and at an increasing rate. Also, the first week of May 2014 was the heaviest searching of gluten in nearly 10 years.

Also in the report, the five U.S. cities with the highest interest in Googling gluten were Portland, Seattle, Denver, Austin, and San Francisco.

The long-term implications for this increase in media attention and Google interest is, frankly, unknown. What we do know is that interest is near all-time highs and by a wide margin.  While these trends can be fickle it is certainly a trend that those in the industry should keep their eyes on.

Those interested in learning more should subscribe to the blog as we will continue to track the gluten trend, changes in the wheat industry, changes in other diet trends, and much more.

How Big Could a Monster Corn Crop…