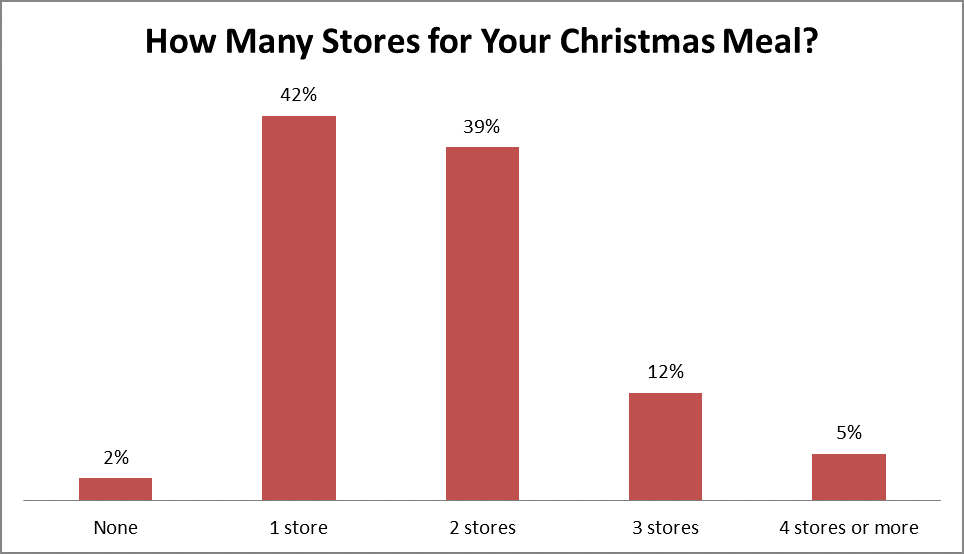 Happy Holidays, Everyone!  We have teamed up across departments at Purdue University to delve into questions surrounding US households spending, meal planning, and health-related behaviors over the 2014 Holiday Season.  We hope you enjoyed our recent post on Thanksgiving meal planning and reported shopping intentions.  Now we have turned our attention to the upcoming December festivities!

We conducted research in collaboration between the Department of Agricultural Economics and Consumer Sciences at Purdue University to survey 620 US residents to gather insight into plans for this holiday season, including travel, intended spending, and meal planning.  Who are these people surveyed, you may be asking; basic survey respondent demographics are available here.

Among the respondents to our survey, 24% plan to travel for the Christmas holiday, with 93% of travelers doing so to visit family/friends in celebration of the holiday.  With nearly a quarter of respondents planning to travel, the anticipated spending on travel was expected to be less by 23% of respondents, and only 12% were planning to spend more.  Given the lower expenses US residents are experiencing at the gas pump recently, it is not surprising that venturing over the hills and through the woods this Christmas is expected to be less expensive than in previous years.

When looking at the intentions for spending on holiday travel by income level (here), we notice that the sentiment is the same across the board; there aren’t major differences in anticipated travel spending related to household income.

Let’s Talk Turkey!  No, turkey starred in last month’s holiday – but not this one …

A total of 547 out of the 620 people surveyed intend to have a meal in celebration of Christmas in December 2014, with an average number of people in attendance at that Christmas dinner of 9.  Of those responding 50% indicated they would do the purchasing, 24% would consult with the person doing the purchasing, and 24% indicated they would have no involvement at all in meal planning or shopping.  One thing was clear from stated shopping intentions of survey respondents, with 21% intending to spend more and only 15% anticipating spending less on holiday meals, food is “front of mind” for many respondents.  Analysis of intended spending on food and gifts was done by household income level.  Interestingly nearly no differences are seen across income levels for holiday meal spending intentions.  However, households reporting annual incomes in the lowest brackets on the survey more often reported less anticipated spending on gifts this year compared to last year.  Broadly speaking, it seems that when tradeoffs are being made, spending on meals is winning out over gifts for survey respondents (click here for graphs).

A total of 67% of respondents indicated that coupons or promotions would be used to obtain their Christmas meal (which is extremely similar to the 64% who indicated coupons/promotions would be sought for their Thanksgiving meal).  Survey respondents were asked which parts of their Christmas meal they purchase a brand name item for, which they decide upon based on price or promotion, and for which items they purchase store brand.  Across all categories provided, the largest proportion of respondents indicated they would make purchasing decisions based on price or promotion.  Retailers, including food retailers, put forth massive campaigns to advertise holiday-related pricing, promotions, and sales.  And, it seems that US shoppers are watching and price-shopping their way to their Christmas meal.

Remember, 21% of respondents expected to spend more on holiday meals this year than last year; so, perhaps price sensitivity and careful shopping – including shopping around at multiple stores – is to be expected.  Shopping for that Christmas dinner is no small job with 56% of consumers indicating they will go to more than one store to shop in preparation for the meal.

Turkey is the star at Thanksgiving.  So, what is the main entrée being served at Christmas?  Hams. A full 42% reported plans of serving it up on their holiday table this year.  A total of 22% of respondents planned to serve turkey this Christmas, and 17% were undecided as of the time the survey was administered.

And, after shopping for promotions at multiple grocery stores (exhausting!), is anyone else wondering if they really have the time to bake that pumpkin pie from scratch?  We asked respondents who were directly involved in Christmas meal planning – do you make or buy?  Pumpkin pie showed the most uniformity across answers with the most people making from scratch, but about equal proportions buying partially made or a fully prepared product.  And, the only item on our list for which the largest proportion of consumers bought a fully prepared product – cranberry sauce.  Apparently there are lots of us who expect it to be shaped like the can …

And before we leave you to enjoy your family and friends this Christmas, a few comments about your holiday healthfulness …

Do You Believe in Santa?  Flying Reindeer?  Some good old-fashioned holiday magic?  How else do you explain this … Respondents were asked to self-report whether they believed they would gain weight, maintain their workout schedules, consume more desserts, etc.  (A preview of this data has already been presented in our Thanksgiving post.)  Do we have a tendency to over-report our own good holiday health intentions and under-report the bad?  There are a few reasons to hypothesize this may indeed be the case.

Social desirability bias is a term that describes the tendency of people to answer questions in a manner that will be viewed positively by others. It often takes the form of over-reporting “good behavior” or under-reporting “bad behavior”.  To test this we asked participants to provide their level of agreement with holiday health-related statements for themselves.  Then they were asked the identical questions regarding the average American. The thinking behind this approach is that human beings have a (subconscious) tendency to over-report their own “goodness” out of concern for how other people might perceive them.  On the other hand, the desire to be looked upon positively by our peers does not extend to our answers about other people (in this case, the average American).

An alternative explanation that cannot be ignored: perhaps we all just enter the holidays with the best of intentions but “fall off the wagon” after one too many holiday candies pass under our noses?

What we found is rather extreme … when it comes to gaining weight, making resolutions to lose weight, consuming desserts, or consuming alcohol, the rates of agreement are far fewer when asked about themselves than when asked about others (average Americans).  Thus, we have underreported our own bad behavior; for example, 29% of respondents expect to gain weight themselves, but 71% expect for the average American to gain weight.  On the other hand, there were much higher rates of agreement for themselves than for others for maintaining workout schedules, watching what you eat, and being vigilant about holiday weight gain.

In loose terms, we do less of the “bad behaviors” and more of the “good behaviors” than the average American.  Seems a little hard to believe that all of us are that much above average (impossible, in fact) … but, tis the season for believing (in a little magic)!

Dr. Nicole Olynk Widmar is an Associate Professor in the Department of Agricultural Economics at Purdue University.  Nicole is a farm management specialist with a research interest in linking consumer preferences for food products back to on-farm decision making.  She holds an AAS from Alfred State College, a BS from Cornell University, and a MS and PhD from Michigan State University.

Dr. Lalatendu Acharya is an Assistant Professor in the Department of Consumer Science in the College of Health and Human Sciences at Purdue University.  Dr. Acharya’s research focuses on communication campaigns, behavior change and consumer participation. He holds a PhD from Purdue University, a MBA from Xavier Institute of Management, India, and BS in Physics from Utkal University, India.

The 2014 Agricultural Year In Review