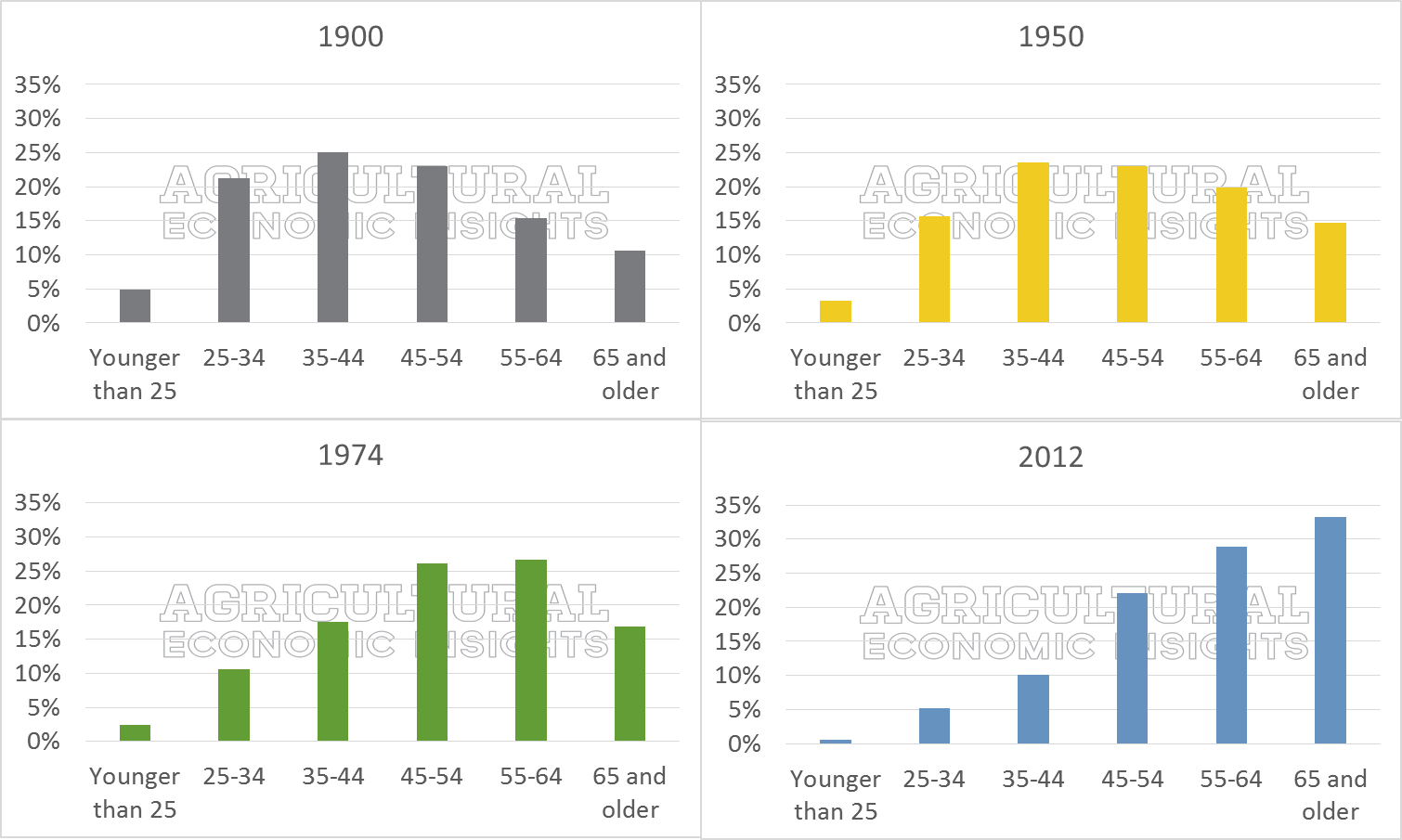 One of the most well known trends in American agriculture is the aging farmer. Year after year, the average age of the U.S. farmers has increased. This trend was confirmed, yet again, with the release of the 2012 USDA Census of Agriculture.

Figure 1 shows the USDA’s estimate of the average age of a producer from 1945 to 2012. Over the 64 years of data, the average age increased by 9.6 years. In the five years between the 2012 and 2007 census, the average age ticked up by 1.2 years. (In 1978 the average age was reported as being younger than the previous census, but it should be noted that this was most likely the results of changes in survey sampling procedure.) 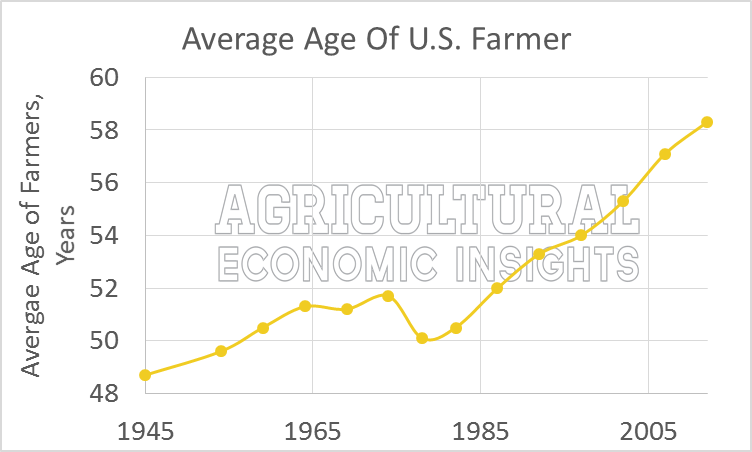 To dig into the trends, Figure 2 looks at the distribution of farmers’ age at four periods of time; 1900, 1950, 1974, and 2012. The two earliest time periods, 1900 and 1950, have a fairly normal bell-shaped distribution. In both years, the largest segment of producers are between 35 and 44 years and represented about 25% of all producers. While the distributions appear similar, a subtle difference exists; producers younger than 45 years represented 51% of total farmers in 1900, but only 42% in 1950.

In 1974, a visible shift in the data is clear as the skew towards older producers emerges. The largest segment of producers were those 55 to 64 years. Furthermore, producers younger than 45 years only represented 31% of total producers.

Currently, the most recent data (2012) reveals a distribution with no bell-shape at all. The largest group of producers is now those older than 65 years, representing a full one-third of all producers. Even more obvious is how few young producers there are. In 2012, those under 45 years only represent 16% of total producers.

While the story of the climbing average age of producers has often been told, the underlying data – the distribution of farmers by age – appears even more interesting.  It is certainly true that many of the older farmers have transition plans in place and in many cases farms have more than one operator which this data does not clearly identify.  However, it is also true that these trends will have very important implications for how the sector evolves.

Figure 3. Number of producers older than 65 years and younger than 45 from 1900 to 2012. USDA Censuses of Agriculture

While the average age of the US farmer is likely to continue increasing, the distribution of farmers’ age will create the most significant changes in agriculture. Although technology is changing and allowing farmers to work later in life, the trend has its limits. As older producers exit, fewer producers will remain and, as a result, the average – or typical- farm size will likely increase. While additional operators could enter production mid-career, it would not be at a one-for-one rate needed to replace those at the oldest age category.

It’s important to point out that the trend is not an alarm for “running out” of farms or food. We are quite confident the U.S. farm sector will handle it quite well.  However, this trend represents a significant transition that will take place within the industry.  The amount of resources controlled by these aging producers is substantial.  How these resources transition will have implications for nearly every agribusiness and farmer.   While many factors will impact how the trend actually unfolds, the unprecedented concentration of older producers will likely drive a faster pace of farm size growth in the future.

In future posts, we’ll be looking at this trends and it’s implications for industry. For those interested in learning more, click here to follow the blog and stay connected as we will continue to observe these trends and continue providing the data, charts, and insights.

The 9 Questions Facing Production Agriculture in…

The Dollar: Add it to Your Watch…