Aging American Farmers and Their Farmland 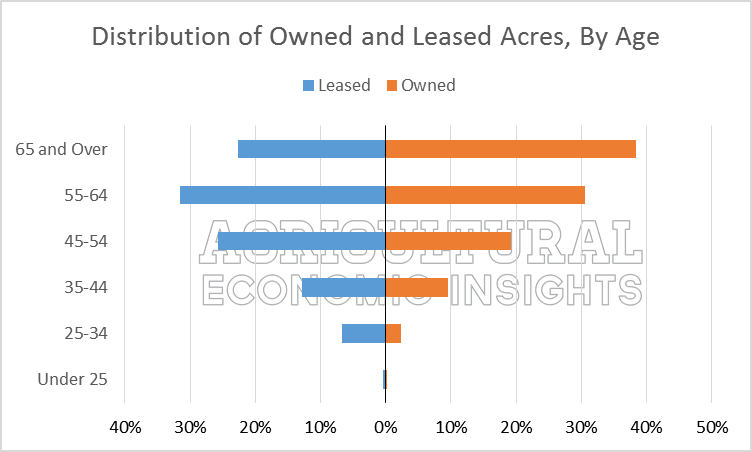 by David A. Widmar and Brent A. Gloy

In a recent post we looked at the aging American farmer.  Although we didn’t discuss it in that post, one of the most important outcomes associated with the trend toward older producers is the concentration of farmland ownership and control amongst older producers.  This post examines that trend.

While the increasing average age of the producer is often noted, an overlooked element to this trend is the underlying distribution of the primary operator’s age. In 2012, the largest group of producers, or 33% of all primary producers, were 65 year of age or older.

Reflecting on the impacts the distribution of producers’ age, we noted the following:

“… this trend represents a significant transition that will take place within the industry.  The amount of resources controlled by these aging producers is substantial.  How these resources transition will have implications for nearly every agribusiness and farmer.   While many factors will impact how the trend actually unfolds, the unprecedented concentration of older producers will likely drive a faster pace of farm size growth in the future.”

Land is one of the most important assets in production agriculture and will be directly impacted by the shifting demographics. It also comprises a substantial source of the wealth of many farmers.  Figure 1 shows the distribution of farmland, both owned and leased, by producer of various ages in 2012. Similar to the distribution or producer age, the largest portion of farmland is held by the oldest group of producers, those 65 years and older. This group manages 32.7% of all acres, or 320 million of the 980 million total acres in the United States.

Producers control farmland through two primary mechanisms, ownership or lease arrangements. Across the U.S., 36.2% of farmland is managed through leases. In figure 2, the distribution of leased (blue) and farmer-owned (orange) acres is shown.

The concentration of land ownership amongst older farmers is quite obvious in the right hand side of figure 2.  Those 65 years and older account for 38.3% of all farmer-owned acres.  This is more than the farmer-owned acres held by all producer younger than 55 years (31.2%).

Figure 2. Distribution of farm-owned and leased farmland acres by age.  2012 Census of Agriculture.

This is highlighted in figure 3, which shows the distribution of all acres owned by age category over time.The first observation is that the percentage of farmland owned by those in all categories less than 55 years of age has shrunk over time.  In fact, aggregating all those in categories less than 45 years of age the percent of acres owned peaked at 25% in 1982 and has fallen roughly in half to about 12.4% today (not shown in chart).

The second observation is the share of farmland owned by farmers in the oldest category has increased substantially over time.  This is a trend that has been in the making for decades (figure 3).

The other thing to note is that while the increases in the share owned by the older producers has been relatively consistent over time, the declines have most recently come from younger farmers.  Again, this is largely a result of the demographic trend away from younger farmers that was described in our early post.

In short, a significant concentration of land held by the oldest segment of producers has been occurring over time. This has been mostly driven by the underlying demographic trends. As we pointed out earlier, this trend has been somewhat inevitable as the sector has aged.  How the land held by older producers is transferred, and the timing, will have major implications for the industry. For instance, will the land transfer slowly over time and maintain the ownership to rental ratio at similar levels or will a significantly higher proportion of acres be rented in the future?

To repeat from our earlier post, the intent is not to sound an alarm for running out of farms, but simply to highlight the challenges, and opportunities, agriculture will face in the coming years. As those older than 65 years, the largest segment of producers and the largest controller of land, begin to retire and exit production, significant acreages will change hands. Given the concentration of both older producers and land held by older producers, we contend that that farm size may increase at a rate faster than usually expected. Like the shift toward older farmers, this is a trend that has and will likely continue to play out over many years.

Many of the farms in the older age categories consist of multiple operators and it’s worth acknowledging that in many cases producers have plans to transition for their operations in place. This would likely results in a significant portion of acres being transferred to a younger generation.

For those interested in learning more, click here to follow the blog and stay connected as we will continue to observe these trends and continue providing the data, charts, and insights

The Dollar: Add it to Your Watch…