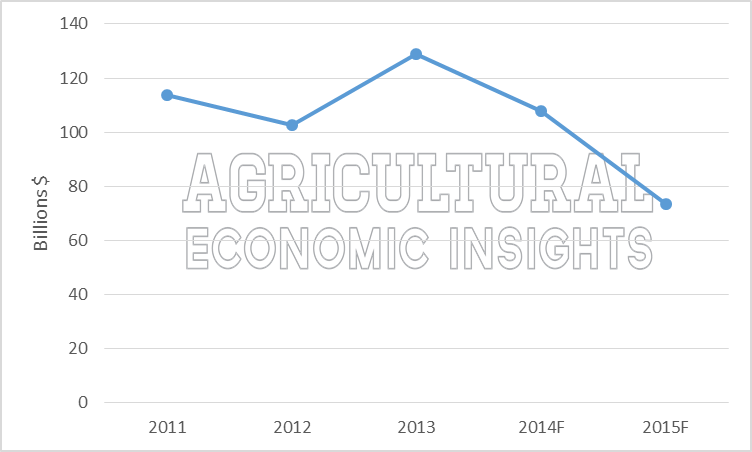 by Brent A. Gloy and David A. Widmar

Earlier this month, the USDA released its 2015 forecast of net farm income. The estimates were headline worthy. Net farm income is forecast to be down nearly 32% from 2014 and at the lowest levels since 2009.

Most of the media coverage of the report looked at net farm income relative to the last few years, such as in figure 1.  Over this time period the picture is certainly sobering.  If the forecasts of 2015 are realized, net farm income will have fallen 43% in just two years.   Without doubt, anytime net income for any industry falls 43% in two years things are serious. But what is often overlooked is how the 2015 net farm income forecast fits into the long run.

One of the first things to note is that the recent USDA forecast of $67 billion (2009 USD) is nearly on par for the long-run average of $72.1 billion. This fact is often missed given the departure from several years that were really good (above the top black line).

Of the 87 years of data, 44 years had real net farm incomes less than what is currently forecast for 2015. While net farm incomes are down, the argument can be made that things are returning to more normal levels.

Another key factor to watch is how the sector adjusts to lower farm incomes.  You might note that on the chart below a series of large declines that started in 1975.  During that time period farmland values continued to increase only to set up the farm financial crisis of the 1980s.  Today, it appears that farmland prices are already beginning to soften.  Such market behavior would appear rational.

Another story that emerges from the decades of data is just how abrupt the transition from 2014 to 2015 will be.  Figure 3 shows the percentage change in net farm income from the previous year.  Net farm income changes a lot from year to year, and this graph captures just how big, or small, those changes are.

2015 is going to be a challenging year. From agricultural businesses to rural communities, the impacts of declining commodity prices and farm incomes will be far reaching. It’s important, however, to keep in mind how 2015 fits into the big picture. The current forecast for net farm income in 2015 is slightly below average. And while the decline in farm income from 2014 is significant, large decreases in net farm income have been fairly common in recent years.

Given a historical perspective, the incomes of the last few years were very high and the income levels forecast for 2015 are more common.  In fact even since the current boom which started in roughly 2004 there have been several years with income levels lower or reasonably close to those forecast in 2015 (for example 2006, 2007, 2009, and 2010).

How the industry transitions to these lower income levels will bear close watching.  This is particularly true of agricultural real estate values.  In some ways it seems that there is a question of whether one should look at the situation as a dramatic decline in farm income or whether one should view the reductions as a return to more normal income conditions in the sector.   We think that it is more the later.  In other words, real estate values likely need to be driven by expectations of future incomes more like the current situation than the income levels associated with the 2011-2014.

At the same time, it’s also important to keep in mind that these are forecasts. A lot can happen over the next several months. In 2014, the initial estimate was for net farm income of $95.8 billion (nominal). Currently, the 2014 estimate is considerably better at $108.0 billion (nominal).