A Look at Crop Insurance Products and Coverage 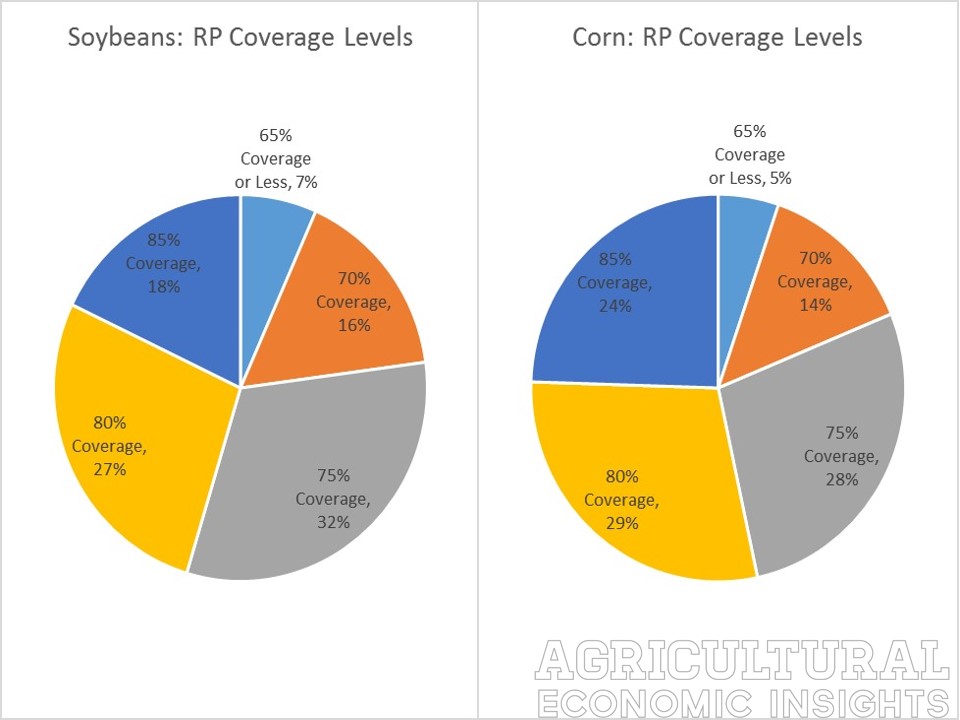 Crop insurance has become an essential risk management tool for U.S. farmers.  With the crop insurance decision deadline looming, farmers must quickly make any changes to their policy and coverage levels for 2015.  Given the current tighter budget realities and fresh memories of the 2012 drought when crop insurance proved very valuable, the stakes are high. A delicate balance between affordability and ample coverage is needed.

Rather than look at lots of different budget and premium data, we decided to examine the crop insurance decisions that producers in different parts of the country made in 2014.  I know that when I saw the data for my own county I was a bit surprised as to the predominant coverage level being purchased.

In addition to the policy, producers also select a coverage level. For RP policies, the enrollment at various coverage levels is shown for corn and soybeans in Figure 1.

Overall, higher coverage levels are used for corn. For corn, 53% of acres insured with RP policies are covered at levels of 80% or higher. This is compared to only 45% of soybeans. The trend for higher coverage level in corn is likely a reflection of the relatively higher cost of inputs but as we will see in the next section the coverage level decision appears to vary regionally.

While revenue protection is clearly the dominant type of coverage, there is more variation in coverage level. To see how this varied across the country in 2014 we calculated the percentage of insured acres in a county that were insured at the 80% coverage level or higher.  The results are shown in figure 2 (corn) and figure 3 (soybeans).  In these maps the dark blue counties with most acres (more than 81%) insured with coverage levels of 80% or 85%.  Those in red had a small proportion (fewer than 20%) of their acres insured with coverage levels of 80% or 85%.  (Counties in white had incomplete or missing data).

Outside of these areas, the use of high coverage levels is much less prevalent. On the Plains, most of the counties report fewer than 40% of their insured corn and soybean acres with coverage levels 80% or higher.  This is also true in the South and in the Mississippi Delta region.

As one would expect, the coverage level choices for corn and soybeans tend to be very similar.  This is to say that there are not regions that buys higher coverage for one crops and not the other.

Figure 2. Percentage of Insured Corn Acres with Coverage at 80% or Greater. Source: RMA.

Figure 3. Percentage of Insured Soybean Acres with Coverage at 80% or Greater. Source: RMA.

Revenue Protection (RP) is a very common product on insured corn and soybean acres across the county.  There is much greater variability in the coverage levels selected by farmers.  While 53% of the corn acres insured in 2014 had coverage levels of 80% or higher, these levels were clearly the most common in the Central corn belt.

Many factors go into producers’ crop insurance decision. Each region has its own production risks and each producers has their own risk preference. Producers should carefully think about how they manage the risk on their operation.

To Beans, or Not to Beans; Where…