Budgets Vs. Reality: A Look at Crop Revenues 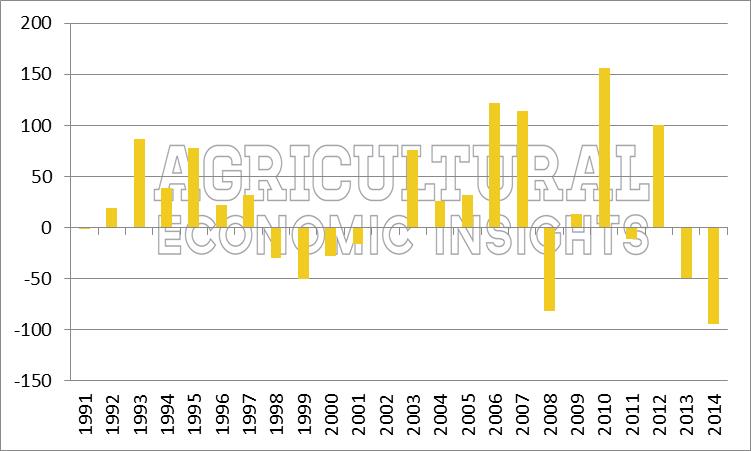 With the new crop planting beginning, or right around the corner for the Corn Belt, much has been made of 2015 crop budgets which show significant loss potential for row crop farm operators. As we pointed out in an earlier post, the budgeted losses are bigger than any in the last 20+ years. We are frequently asked how budgeted values have corresponded to actual outcomes. While budgets are great tools and very useful in planning and understanding how producers will make planting decisions, it is quite likely that the actual outcomes achieved will be substantially different than those forecast at planting. Price and yield deviations from budget are one of the biggest drivers of these differences.

We thought it would be interesting to look at the relationship between budgeted and actual revenues over time. Specifically, we compared actual market year average (MYA) prices and county level yields to those found in the Purdue crop budgets. This should provide some indication of how prices and yields vary relative to budgeted values. The results carry the caveats that farm level yields can be more or less variable than the county average and that there is no guarantee that a farmer will receive a price that matches the state-level marketing year average (MYA) price. These caveats aside, the results of the analysis provide some insight into how actual outcomes correspond to pre-plant crop budgets.

We used the Purdue crop budgets for average quality Indiana farmland reported in ID-166 as the basis for the analysis. These budgets assume a 50-50 corn soybean rotation and covered every year from 1991-2014. We chose to compare these budgets to the actual experience of Miami county Indiana, which has a 2015 trend corn yield very close to the 2015 expected yield in the average quality budgets. For actual yields we used the average corn and soybean yields for Miami county Indiana and the actual prices were the marketing year average corn and soybean prices for the state of Indiana.

In 2014 the forecast was for rotation corn and soybean yields of 163 and 54 bushels respectively. Actual yields were better, coming in at 176 and 54 bushels per acre. On the other hand, actual prices were significantly lower than budgeted coming in at $3.60 and $10.30 versus $4.80 and $11.60 per bushel. The combination of actual prices, yields and crop insurance indemnities produced revenue that fell $93 short of budget.

As one might expect, such differences were common throughout the time period. The differences between these two series are shown graphically for each year from 1991-2014. Over time actual revenues have slightly exceeded the budgeted values. The actual results exceeded budgeted revenues 15 out of 24 years. On average the difference between these values is $12 per acre. However, the results show an extreme amount of variability around the average. The standard deviation of the difference is $65 per acre. The biggest miss on the upside occurred in 2010 when actual results exceeded budgeted values by over $150 per acre. On the downside, in 2008 revenue came in $81 below budget and 2014 was even worse with revenue falling $93 short of budget.

So Is it Prices or Yields?

When looking at the deviations from budgeted revenues it is important to understand what role prices and yields played in the differences. To do this we calculated the volume and price variances associated with the outcomes. The volume variance shows the impact of the yield difference if sold at budgeted prices. The price variance is the impact of differences in prices at the realized yields. In any given year the total of the two is the amount shown in figure 1 less any crop insurance indemnities.

The price and volume variances are shown in Figure 2. The figure illustrates several important ideas. First, the price and yield variances usually operate in the opposite direction. In other words, if the yield variance (in yellow) is positive, the price variance (in green) is usually negative. This is what is often referred to as the natural hedge phenomenon. In this data, that relationship holds 16 out of 24 years, or 2/3 of the time. However, in this location, the natural hedge does not remove all of the budget variance as was obvious in figure 1.

It is clear that both prices and yields can have substantial bearing on whether actual revenues exceed budgeted values. The yield variance had an absolute value greater than the price variance almost half of the time, but price variances had a tendency to be greater in magnitude.   However, it is important to remember that the use of county-level yields in the analysis likely understates the importance of yield risk. The other thing to note is that price variances were positive 13 out of 24 years, so prices moved up from budgeted values roughly as often as they moved down. Yields exhibited positive variance in 15 of 24 years.

Given the lousy profitability outlook facing row crop producers, many are working hard to identify areas to improve profitability. Revenue is a big driver of these outcomes. If history is a guide, one can take some solace in the fact that budgeted and actual revenue outcomes frequently diverge. However, one should also take caution in the fact that actual outcomes are only a little more likely to diverge toward the upside. Given the very low and negative profitability projected for 2015, a more negative revenue situation would severely compromise profitability, careful navigation forward will be necessary.

This analysis focused on revenues. We know that this differs from reality as farmers will work to adjust costs to the extent possible in the given economic environment. This includes changes in agronomic practices as well as crop rotations. Further, the adjustment on fixed costs is already underway with pressure on land values and rents now apparent. While these likely won’t help this year’s bottom line, they will begin to provide relief next year.

An Expanding Drought Across the Plains