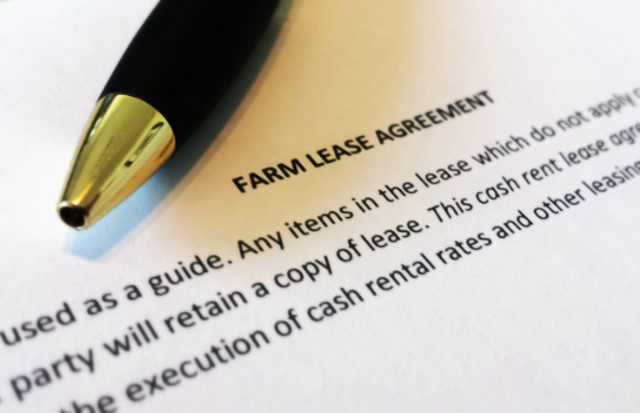 In an earlier post, we looked at how producers’ share of rented and owned farmland varied by age. As one would expect, young producers rent a large proportion of their acres, while older producers own the majority of their farmland. A natural follow-up in our minds was to examine how the share of rented acres differs across states. Do some states or regions have more acres of rented farmland?

The 2012 Census of Agriculture reported that 38.4% of farmland was leased or rented. By state, however, the share of rented acres can vary greatly, as show in figure 1.

The darkest shades represent those with a higher share of rented farmland acres. As you’ll notice, the heart of the Corn Belt is where rented farmland is most common. In Illinois, for example, 60% of all acres were rented in 2012.

In general, states in the West, Southeast, and Northeast have a much smaller share of rented farmland.

Another interesting observation is how stark the differences can be with neighboring state. Missouri and Wisconsin, for instance, have a lower share of rented acres than most of the neighboring states. This naturally leads to the question of what is driving the variation; a question we will have to save for a future analysis.

In figure 2, the shares of rented farmland from 1997-2012 for Illinois, Indiana, and Iowa are shown. Over those years, the trends were overall flat with only small changes observed from year to year. Indiana, for instance, reported 51% of farmland acres being rented in 1997. This share peaked in 2007 at 54% and is recently reported at 53%; very small changes over a long period of time.

Outside of the Corn Belt however, changes in share of rented farmland has been observed in recent years. By taking the difference from the current share of rented acres from that reported in 1997, we can measure the change in shares. The most substantial was a decrease in the share of rented acres of 15 percentage points in Nevada. Other states with significant decreases worth noting were Kansas (-5), Texas (-5), Washington (-6), and Wyoming (-6). Tennessee, on the other hand, had the largest shift toward rental  with an increase of 5 percentage points.

The share of farmland that is rented varies significantly by state and region. The local share of acres available to rent can be important for producers to consider, especially for younger and larger producers who might rely on heavily on the rented acres.

We looked at aging farmer and the implications for farmland in another earlier post. Our conclusions were that the older producers, those older than 65, control the largest share of acres and own a historic high share of total owned acres. Coupling those trends with these geographic variations make one wonder how producer and state-level rental trends might adjust.

These are also important trends for agricultural lenders to keep in mind. The customer needs and customer demographics are likely to change based on these changes.

A natural question to ponder after considering these data are what is driving the variation? Enterprise types, land valuations, rental returns, producer demographics or social norms? These are all possible, but we’ll take a look in future posts to try to further explain.

Budgets Vs. Reality: A Look at Crop…