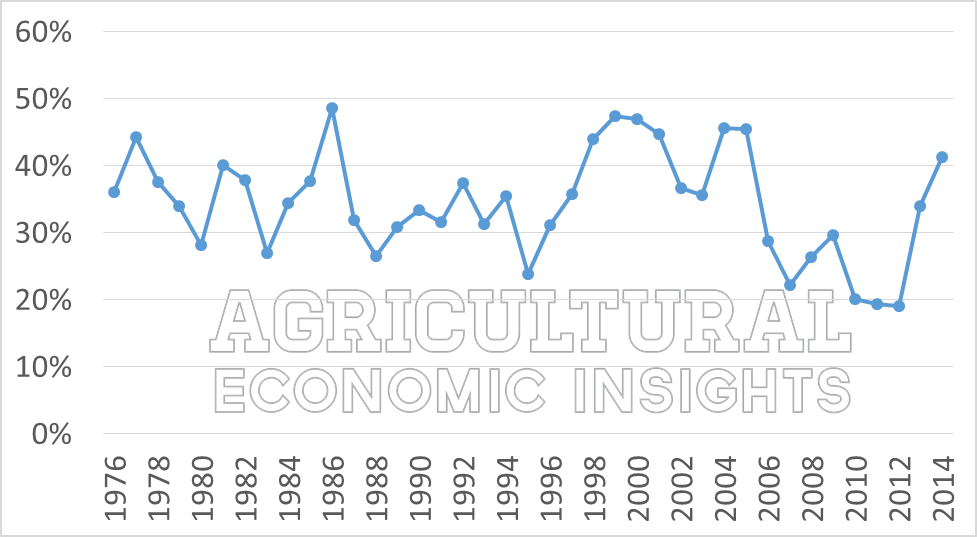 In our last post we examined some of the trends in farmland values around the country. These trends indicated that farmland prices were likely heading lower in many regions of the country. This is likely the most true in the Corn Belt where grain prices have been under substantial pressure. The output price pressure has been met with stiff resistance in input prices creating a significant margin squeeze. One way that this squeeze may alleviate is with a reduction in fixed costs, most notably cash rents and farmland prices.  Indeed, recent survey results from Iowa State indicate this process is underway.

The margin squeeze gripping agriculture has been brought on by significantly lower commodity prices. For instance, the marketing year average corn price has fallen from its $6.89 per bushel 2012 peak to the current forecast of a $3.65 for 2014/15. Current prices for the 2015 corn crop on the Chicago Board of Trade are near $3.75 per bushel and the crop insurance guarantee is $4.15 per bushel. All prices are significantly lower than those of just a few years ago. At the same time many input prices have held firm as farmers are planning to plant significant amounts of both corn and soybeans.

We have argued that this situation is likely to result in downward pressure on cash rents and land values. The 2014 Purdue Farmland Value Survey reported that high quality Indiana farmland (with an expected production capacity of 196 bushels per acre) rented for $292 per acre. This equates to cash rental rate of $1.49 per bushel of expected production.

To better understand how rents were priced relative to current commodity prices we calculated the ratio of cash rent per bushel to the marketing year average price for Indiana. This ratio can be interpreted as the percentage of gross crop income that farmers are spending on cash rents. For example, at a cash rental rate of $1.49 per bushel and an expected market year average price of $3.65 per bushel the farmer would be expecting to spend roughly 41% of their gross corn receipts on cash rent. Figure 1 shows this series of values dating back to 1976.

The figure shows that ratio of rental price to output price can be quite volatile. Given that rents have not generally exhibited a great deal of volatility, much of the variation is due to output price changes. For instance, rents have only changed by more than 10% in 9 of the 39 years shown.

Prior to the late 1990’s and early 2000’s cash rent to price ratios above 40% were not frequently seen. One likely explanation for the persistence in this time period was the presence of substantial government program payments. The revenue from these payments was not reflected in the commodity prices that farmers received.

The data in Figure 1 are summarized further in the histogram shown in Figure 2. The histogram shows that the most common ranges for the rent to corn price ratio are 30-35% and 35-40%. The ratio is about equally as likely to be below or above these levels.

What Does this Mean for Farmland Values

So what do these ratios mean for farmland prices today? Table 1 shows farmland values under a variety of corn prices and different values of the ratio. In this table we have held the farmland capitalization rate constant at 3.5% and assumed that the land was expected to produce 200 bushels of corn per acre. For instance, at a corn price of $4.00 per bushel the land would produce $800 of revenue. With cash rent at 35% of corn price this would result in cash rental income of $280 per acre. That value capitalized at 3.5% (divide $280 by 3.5%) results in a land value of $8,000 per acre.

Today, commodity prices are lower. At 3.75 per bushel, values in the 35% and 40% columns would result in land values that are well below the 2014 survey values. Clearly, if buyers demand a 3.5% capitalization rate, they are likely expecting today’s lower corn prices to be short-term in nature.

The values in the table indicate that there will likely be pressure on farmland values going forward. Some reasonable assumptions could produce farmland values that are up to $1,000 per acre less than the last survey values. In order to justify today’s lofty farmland values, one must either assume that corn prices are set for a rebound over the coming years, or that capitalization rates will be at or even below 3%. While corn price expectations in the $4.00 to $4.25 range would likely suggest a decline in farmland prices, the declines that would be indicated would leave prices still well above their values of only a few years ago.  For instance, in 2012 the value was $7,704 and in 2011 it was $6,521.

Of course, commodity price expectations could decline (or rebound) rather quickly and these changes would impact the fundamental values of farmland. However, unless capitalization rates were to increase simultaneously with lower corn price expectations, it appears farmland values are not likely in for a tremendous decline.

A Farm Debt Repayment Problem? Not Yet.