A Farm Debt Repayment Problem? Not Yet. 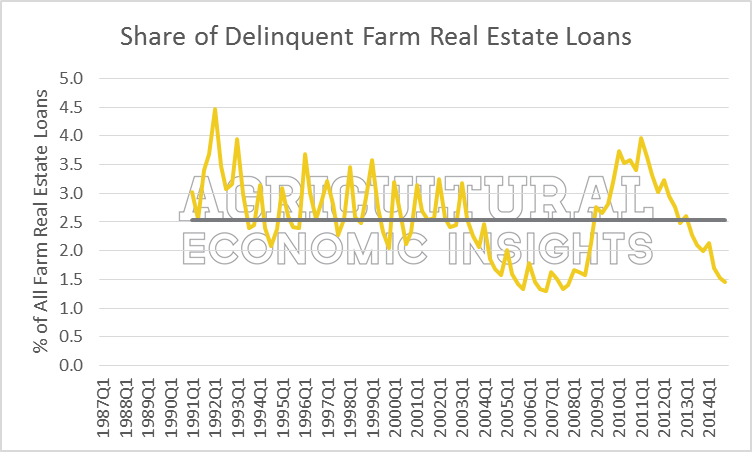 Given USDA’s current projections for net farm income, 32% lower than in 2014, its natural to wonder about producers’ financial ability to weather the current conditions. As profitability slips, or even turns negative, some producers may find it difficult to service their debt, creating financial hardships and sometimes even business failures. Difficulty servicing debt, mainly farmland debt, is what comes to mind when reflecting on the farm financial crisis of the 1980s.

This led us to wonder if farmers are currently struggling to repay their debt. For this, we took a look at the farm debt data posted in the Agricultural Finance Databook published by the Kansas City Federal Reserve. The Agricultural Financial Databook is a collection of survey work the Federal Reserve collects and is extremely valuable for monitoring the farm financial system.

The first set of data are the share of non-real estate farm loans held by insured, commercial banks. These data are provided quarterly and available since 1987. Over the 28 years, the average share of delinquencies was 2.8% (represented by the gray bar in figure 1).

From figure 1, a couple big-picture observations can be made from the non-real estate delinquencies. First, the percentage of all non-real estate loans that were delinquent in the late 1980s was substantially higher than anything observed since (and likely before). At a high of 10.4% of loans delinquent, the first quarter of 1987 conditions are levels that no one wants to see again.

The second observation is the saw-tooth like trend of the graph. This is a results of an annual cycle in agriculture. Generally, the first quarter of a year has the highest delinquency rates and the rate decrease throughout the year. It’s important to keep the seasonal pattern in mind when monitoring these data.

Since 2000, the delinquency rates for non-real estate loans has, with a few exceptions, been well below average and is most recently at record-low levels. The latest data, the fourth quarter of 2014, are reported at 0.7%.

How Fast can Conditions Change?

If farm loan delinquencies haven’t ticked up yet, how fast can conditions change? Taking a look at figure 2, a quick run-up in the share of delinquent farm real estate loans from reported from 2008 to 2013. In the first quarter of 2008, the report was 1.66%, well below average. A year later, the share had jumped to 2.76%. Another year later, 2010, the rate surged to 3.74%. Over the three year span, the delinquency rate on farm real estate increased by more than 1 percentage point per year.

Even though farm real estate delinquencies in the last quarter of 2014 approached nearly record-low levels, it’s possible for conditions to tick-up to above-average levels within a year.

Overall, the most recent data on delinquent rates for farm loans suggests levels are at, or near, record-low levels. As producers face lower commodity prices, declining net farm income, and margin pressure in 2015, it will be important to watch these rates. Solace can be taken in debt delinquency rates being at low levels heading into income pressures.

One caveat. These data only consider what is being reported from commercial and insured banks, or traditional lenders. Today, farmers obtain debt from a host of sources in addition to traditional lenders; local retails, input suppliers, and capital equipment dealers, and local retailers to name a few. Why is this important? The delinquency rates for the loans outside of traditional banks are not included in the data and are unknown. The implications of this become more significant if delinquency rates for these loans are higher, or lower, than those of traditional banks.

Moving forward, it will be important to keep watch and monitor these metrics. Keep the starting point in mind, however. Even a tick-up in delinquencies could keep levels below long-term averages. A final thought, farms fail all the time. Even in the recent boom in agriculture, the delinquency rates were never zero percent.

Equipment Investment: How Much is Enough?