A Look at Corn and Soybean Seed Expense 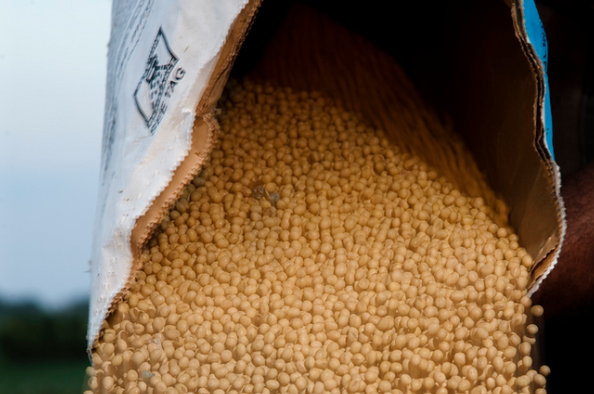 In this week’s post are revisiting seed expense and take a look at corn and soybean seed expenses.

The USDA’s Economic Research Service (ERS) provides cost of production estimates for corn and soybeans back to 1975. These data include national-level estimates for seed expenses. The estimated corn seed expense, adjusted for inflation (or in “real” terms) is shown in Figure 1 in orange (left axis). From 1975 to approximately 2002, the average seed expense for producers across the United States was around $40 per acre when adjusted for inflation (2014=100). Since 2002 seed expense has increased rapidly. From 2006 to 2014 alone, the seed expense nearly doubled in real dollars; increasing from $51 per acre in 2006 to $101 per acre in 2014 (in nominal dollars, the increase was from $44 to $101).

Soybean seed expense in Indiana is shown in Figure 4. Similar to corn, the budgeted expense per acre has increased over the time period. Since 2002, the expense has increased at 7.2% annually.

At the national level, there is precedent for lower expense for soybeans seed (2010 into 2011). While soybean seed has accounted for a lower share of total expenses since 2010 (Figure 2) current levels are well above historic levels. For corn, seed expense has not substantially declined over the evaluated time period.

Even if budgeted seed expenses stay constant into 2016, current estimates for grain prices in 2016 will leave seed expenses in the Purdue budgets at or near record levels for 2016[1].

Similar to our conclusions last year, this environment seems ripe for a seed manufacture to cut prices as a strategy for gaining market share. This did not appear to happen last year and producers should not plan on lower seed prices as a plan for lowering their seed expense. Again in 2016 producers will have to consider the hybrids, seed treatments, and genetic stacks they select as well as their seeding rates.

In Indiana, corn and soybean seed expense accounts for nearly 19% and 16%, respectively, of total expected revenue in 2015 and it would not surprise us to similar or slightly higher levels in 2016.

Are Fixed Farm Expenses Coming Down Yet?