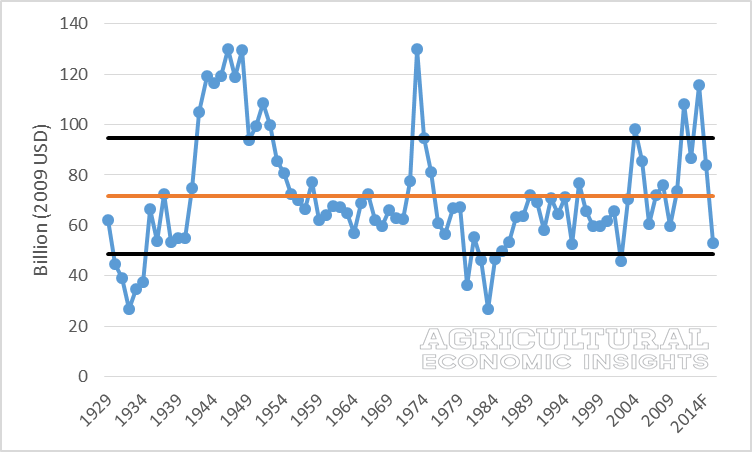 Last week the USDA’s updated estimate of U.S. net farm income in 2015 was ratcheted lower. Earlier this spring, estimates were that net farm income would be substantially lower than the recent highs, but returning to levels near the long-run average (as we pointed out here). The latest estimate, however, casts a more pessimistic outlook for 2015 and the subject of this week’s post.

Most of the media attention has focused on net farm income in nominal dollars, not accounting for inflation. To compare the current situations to historic conditions, real (inflation adjusted) net farm income from 1929 to 2015 is shown in figure 1 (2009 dollars).

Also shown in figure 1 are two black, horizontal lines. These represent one standard deviation above and below the mean. These are important to consider as net farm income has transitioned from several years of considerably above-average conditions (near or above the top black line) to approaching the lower black line. Over the 87 years of data, 2015 net farm income income is now estimated at the 12th lowest level. In other words, in 87 years there has been 75 years with inflation adjusted net farm income higher than the current 2015 estimate.  Clearly, 2015 will go down as an economically tough year for many farmers.

The current estimate for 2015 real net farm income represents a staggering 54% contraction from recent high of $115.7 billion in 2013. This substantial change has occurred in just two years. In figure 2, the annual percentage change in net farm income is shown. In 2014 net farm income declined 28% and in 2015 the decline is forecast at 37%.

The primary driver in the declining net farm income has been the slide in commodity prices, especially corn. In addition to net farm income estimates, the USDA also publishes estimated values of production for select crops and livestock, shown in figure 3. The value of corn and soybean production has experienced sharp declines since 2013, contracting 41% and 18% respectively. Some of the livestock sector has also experience tough times.  For example, the value in hog production in 2015 is expected to be 28% less than 2014.

Cattle & calves, on the other hand, have experienced increasing value of production; up 28% in 2015 compared to 2013. It’s worth noting that in 2011 the value of corn and cattle and calves were nearly equal at $61 billion. Since 2011, however, a gap has emerged as the value of cattle and calf production has increased nearly $24 billion while corn has declined more than $17 billion.

The latest net farm income estimates in 2015 are more pessimistic than previously reported. Conditions that were thought to be returning to average are now transitioning to conditions considerably below-average. When adjusting for inflation, net farm incomes in 2015 are now estimated to be the 12th lowest in 87 years of data.

The rate at which net farm income has declined is also noteworthy. When measured in real terms, the annual change in net farm income from 2014 to 2015 is the third largest decline observed. This decline has resulted from a combination of lower commodity prices and persistently high expenses. For example, although incomes declined substantially, cash expenses for 2015 are forecast higher than those experienced in the 2013 record income year.

While the conditions across the sector are less than desired, the impacts are not felt uniformly. When considering the value of production for enterprises, corn, soybeans, and hogs have reported substantial declines in recent years while cattle & calves have observed a significant increase.

Just as the variation by enterprise exist, state, county, and farm-level variations in net farm income and value of production changes can be expected.  These declines are substantial and will likely result in some financial pain in the farming sector. Going into the downturn the financial conditions (debt levels and repayment capacity) were very strong.  This downturn will likely put that to a serious test.

In short, it is unlikely that incomes will approach anything like the recent high levels anytime soon.  A third year of decline in 2016 would likely place the downturn among the largest declines in history.  Time will soon tell whether that is to be the case.