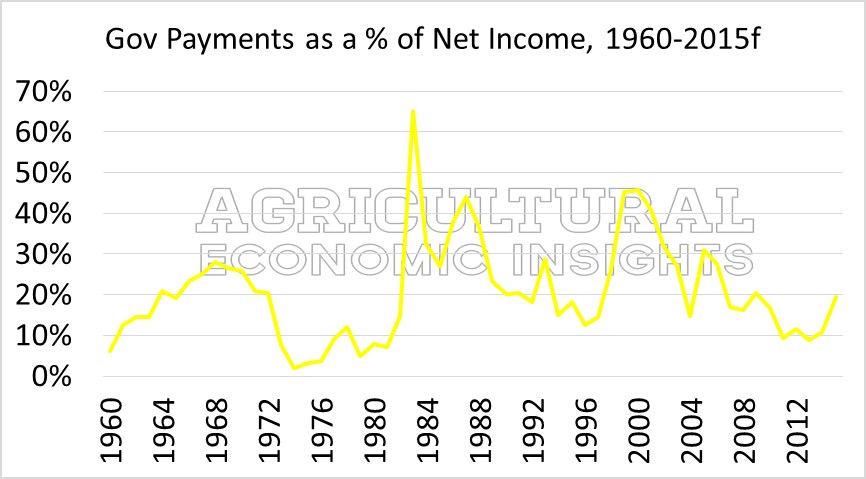 We thought it would be worthwhile to examine the decline in further detail. As we mentioned last week, persistently high and increasing expenses have played a key role in the decline. We will look at how expenses have changed throughout previous downturns in a later post. For this week’s post we wanted to look at something that hasn’t gone up in this downturn, direct government program payments.

Government Payments Through the Years

Direct government program payments have played a key role in farm economics for decades. Figure 1 shows the annual real value of direct farm program payments from 1960-2015f. One might suspect direct payments peaked in 1987 during the peak of the farm financial crisis. Indeed, they reached a very high level in that year. However, in real terms the direct payments received in 2000 were slightly larger. In fact, payments from 1998 to 2006 were nearly always above $15 billion and sometimes well above that level.

As incomes rose in 2007 direct farm program payments have fallen steadily. Today, direct payments are forecast to be slightly above $10 billion in real dollars. In nominal terms, USDA is forecasting direct payments at $11 billion. This includes a forecast of roughly $5 billion in ARC payments.

We are not particularly interested in getting into a debate about the pros and cons of government support in agriculture. That debate could go on forever. Instead, we think it’s important to describe the facts of the situation: direct farm program payments have provided considerable financial support to farmers over the years and they still provide a considerable amount of income to the U.S. farm sector.

The design of the ARC program suggests that program payments are likely to be relatively large through at least the first two years of this downturn. As the farm sector finds itself in the midst of a second straight year of declining farm profits, one should not look for 2014 Farm Bill payments raise incomes to anything approaching previous levels of profitability. For example, to get back to the long-run average level of income in the sector an additional $18 billion would be required, almost double the current forecast for program payments.

Furthermore, the program’s Olympic averaging calculation method and current commodity price levels set the stage for a substantial decline in guarantee levels. If 2015 conditions were held constant, lower government payments for the 2016 crop and beyond would be expected. As a result, it is clear that government programs will not restore income levels in the farm sector anytime soon. This means that farms will have to be extra diligent to control costs and prepare themselves for this challenging economic environment.

From the Fed to the Farm: A…