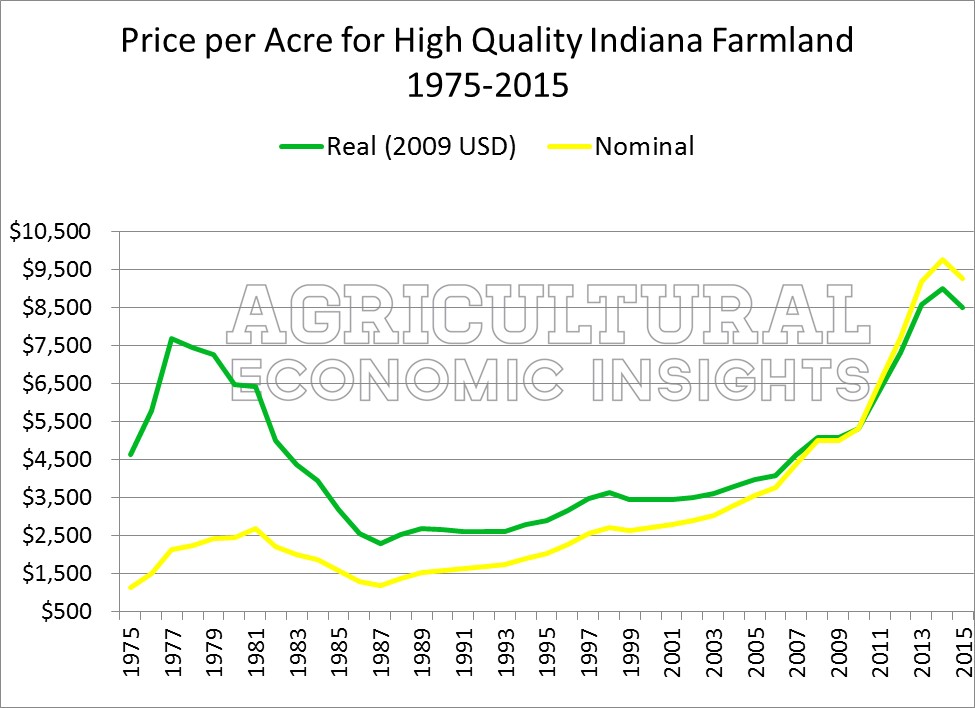 As we discussed in these May posts (1, 2) most indications are that prices for U.S. row crop farmland are now softening, bringing an end to a tremendous run of increases for farmland values. We thought it would be useful to take a look at how far farmland values have come and some different measures of farmland valuation in order to gain  insights into where prices might be headed.

Farmland values have been through a period of tremendous adjustment. Figure 1 shows nominal and real prices for high quality Indiana farmland from 1976-2015.   The majority of the gains in farmland prices (both nominal and real) have come in the last ten years. Since 2005, high quality Indiana farmland has increased at a nominal annual compound growth rate of 10% and real values have increased at a rate of 7.9%. These growth rates are very large since they do not include the value of cash rental income. For instance, over the period of 1975-2015, nominal and real values increased at much more modest compounded rates of 5.3% and 1.3%, respectively.

When observed in real prices, the magnitude of the late 1970’s farmland bubble and 1980’s bust is truly spectacular. From their peak in 1977 real prices declined for 10 consecutive years, finally bottoming in 1987. The total decline over that period was 70%. Since then real prices have marched steadily higher with declines in only 6 of the next 28 years.

Back in August Gary Schnitkey made the argument that current cash rents are too high given current economic conditions and we will provide more evidence in the next section.  On top of that current capitalization rates are already extremely low making it unlikely that further declines in capitalization rates could be sustained. An unfavorable change in either would place pressure on farmland values; an unfavorable change in both would be quite burdensome (for more on some different scenarios see this post).

A less common way to evaluate farmland prices is to compare the returns that would be gathered by a farmer who owns and operates a farm (an owner-operator) to farmland prices. This measure is calculated by adding the cash rental rate to the net expected earnings from operating a farm. In other words we credit back the cash rent that the farmland owner would basically pay to himself.

One reason this method is used less frequently, is that owner-operator returns are much more volatile than cash rental rates. As a result the ratio tends to bounce around much more than the cash rent capitalization rate. However, we find it to provide some useful information as it captures the total returns generated by the land.

The owner-operator returns are expected returns calculated from the Purdue crop budgets. The ratio of owner-operator returns to average quality Indiana farmland values from 1991-2015 is shown in Figure 3. As described above, this ratio is much more volatile than the traditional farmland capitalization rate. This measure takes into account the fact that cash rents do not adjust rapidly to changes in the economics of operating a farm.

As one can see the rate of return for the owner-operator peaked in 2008 as income prospects improved rapidly and cash rents had yet to adjust upward. At this point farmland ownership was attractive to farmers as was renting farmland at the rate prevailing during that time period. Now, the reverse is occurring. Owner-operator returns relative to farmland are as low as at any point since 1991. Currently purchasing farmland at current prices or renting farmland at prevailing rates is not attractive. This provides further evidence to support additional declines in both farmland prices and cash rental rates.

Farmland values and cash rents in the Corn belt continue to come under downward pressure. When current cash rents are compared to current farmland values, the outcome is a capitalization rate of around 3%. This value is reasonable given current longer term interest rates. However, the bigger question is whether cash rents can be sustained at current levels in this economic environment.

In our opinion the conclusion from our May 11, 2015 post sums up the current situation pretty well:

….. Some reasonable assumptions could produce farmland values that are up to $1,000 per acre less than the last survey values. In order to justify today’s lofty farmland values, one must either assume that corn prices are set for a rebound over the coming years, or that capitalization rates will be at or even below 3%. While corn price expectations in the $4.00 to $4.25 range would likely suggest a decline in farmland prices, the declines that would be indicated would leave prices still well above their values of only a few years ago.  For instance, in 2012 the value was $7,704 and in 2011 it was $6,521.

Of course, commodity price expectations could decline (or rebound) rather quickly and these changes would impact the fundamental values of farmland. However, unless capitalization rates were to increase simultaneously with lower corn price expectations, it appears farmland values are not likely in for a tremendous decline.

Are Lower Fertilizer Prices in the Cards…