What’s Up with those Pricey Turkeys? 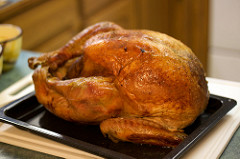 As Thanksgiving nears, the impact from Spring’s avian flu outbreak on poultry production is becoming more evident. A recent report from Purdue University noted that while the price of most food for Thanksgiving will be only slightly higher than last year, turkey will be the exception at 15-20% higher.

And while the connection between the avian flu outbreak and higher food prices is easy to make, this week’s post take a look at U.S. turkey production to consider the magnitude of production losses.

Turkey Production Down in 2015

Turkey production started 2015 in a fairly strong position. Production, measure in pounds of turkey slaughtered monthly, exceeded 2014 levels through April (Figure 1). After the outbreak of avian flu across the U.S., especially in the Midwest, production fell. In May production was 13% lower than April. By June production rebounded slightly, but remained below normal levels for the summer.

Although not shown, the cumulative monthly production for this year is 97% of average through September. Another way of saying this is that for the year as a whole, production in 2015 is 3% lower than the 5-year average. This is probably surprising to most, but it is important to consider the strong production early in the year that helped off-set avian flu losses.

In addition to being more expensive, this year’s Thanksgiving turkeys will be smaller with a higher proportion being frozen. In figure 3 the monthly average turkey weight at slaughter is shown from 2011 to 2015. Similar to the production trend, the average bird weights started strong for 2015 but dropped off through the summer. As of September, turkeys in 2015 are smaller than recent history (2014 and 2013), but larger than 2011 and 2012 levels. Compared to 2014, the average bird weighted 0.85 pounds less in September.

In addition to be smaller, the share of turkey production that is frozen is above the five-year average, figure 4.  The share of production being froze reached a peak of 45% in July, the second-highest observation in the five-years of data.

Most consumers will likely find their Thanksgiving turkey 15-20% more expensive this year. After digging into the U.S. turkey production data a few observations can be made.

First, turkey production in the U.S. did not decline in 2015 as much as many might expect. From a cumulative, year-to-date measure production was only 2% less than 2014 level (and 3% less than the five-year average) through September. Given the inelastic nature of agricultural markets, it doesn’t take a large change in production to result in a larger change in price. Furthermore, the starting point matters; before the avian flu outbreak turkey production in early 2015 was strong helping to off-set the later losses.

In addition to being more expensive, consumers will also notice smaller turkeys compared to recent years and a large share of frozen turkeys.