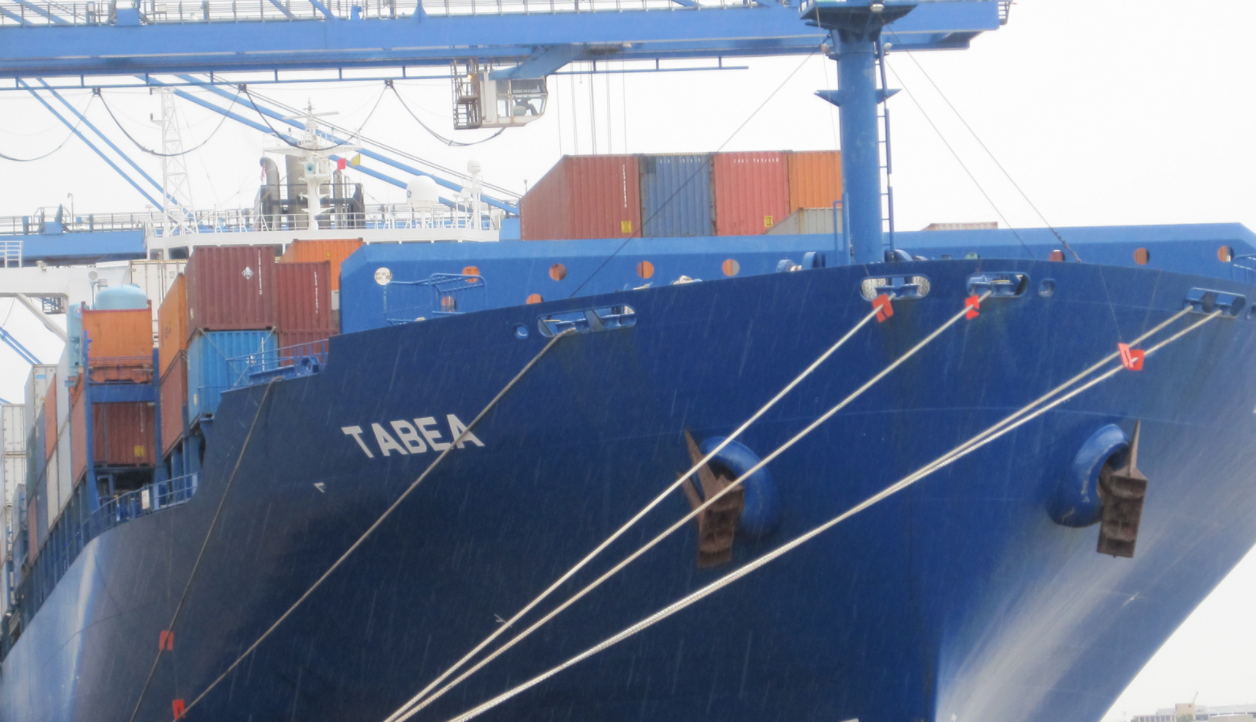 Grain commodities have faced significant headwinds in recent months. It seems that bearish news keeps following bearish news. In addition to above-trend crop yields in the U.S. adding to already abundant inventories, the strong U.S. Dollar has made it difficult for the U.S. to compete for global export markets. In this week’s post, we’ll take a look at corn and soybean exports to evaluate current conditions

Export markets are critical for U.S. agriculture, especially for soybeans. In figure 1, total U.S. soybean exports (show in blue) are reported since the 2000/2001 marketing year. After several years of soybean exports around 30 million metric tons (MT), exports began to increase in 2008/2009 and reached more than 50 million MT in 2014/2015. Estimates for the current export year (2015/2016) are around 46 million MT, down 8% from the previous year. While exports being down is disappointing, it’s important to keep in mind the 2015/2016 exports would be the second-largest export year in more than sixteen years of data. 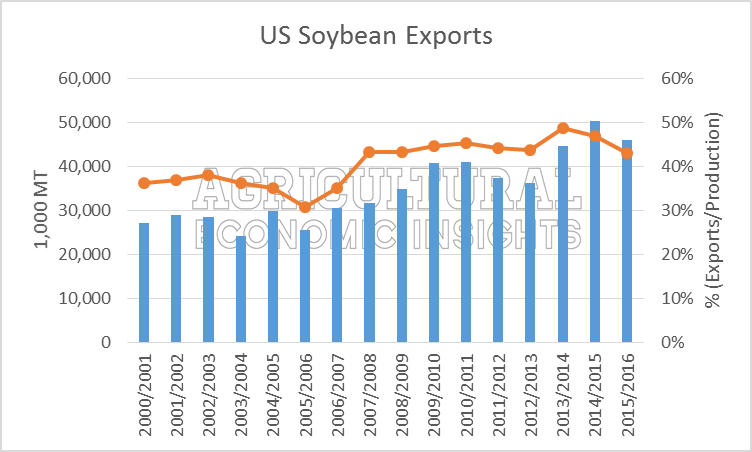 A different story has emerged with U.S. corn exports. Shown in Figure 2, total U.S. Corn Exports have ranged between 40 million and 50 million MT for most of the data series. There were exceptions when strong exports reached more than 60 million in 2007/2008 and when soft exports fell to less than 20 million MT after the drought of 2012. Exports for the current year (2015/2016 market year) are reported to be nearly 42 million MT. These levels are 12% lower than the previous year and would be the fourth lowest in sixteen years.

Exports as a share of total corn production (shown in orange, right axis), have trended lower over time. For several years exports accounted for 16-20% of total corn production but have recently been lower. Currently exports only account for 12% of total production. This would be the second lowest level, behind 7% observed after the drought of 2012. Overall, exports have been playing a smaller role in demand for the U.S. corn crop. 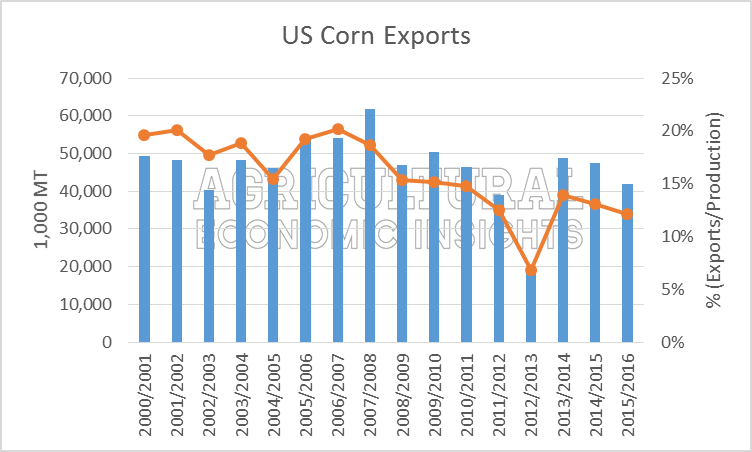 When thinking about exports it is also important to consider what is going on globally. In figure 3, the exports of soybeans from Argentina, Brazil, the United States, and the World total are shown. World exports are estimated being at record levels in 2015/2016. At nearly 130 million MT, this would be 3% higher than the previous year. It’s worth noting that the growth in exports (not shown) in 2013/2014 and 2014/2014 was 12% annually. So while World exports of soybeans are increasing, the pace has recently slowed. 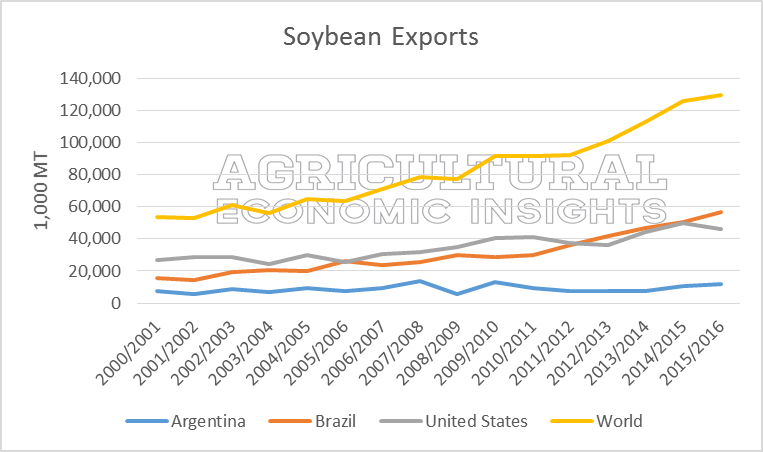 In Figure 4, corn exports from Argentina, Brazil, the United States, the Former Soviet Union (FSU) region, and the World are shown. One key-trend emerges. As the United States corn exports began trending lower (2007/2008), World exports began to increase. This lead to rapid expansion in exports from countries such as Brazil and the FSU region. The FSU regions, for example, accounted for less than 5% of the world total export prior to 2008/2009. In the most current year, the region will account for 16% of all global exports. 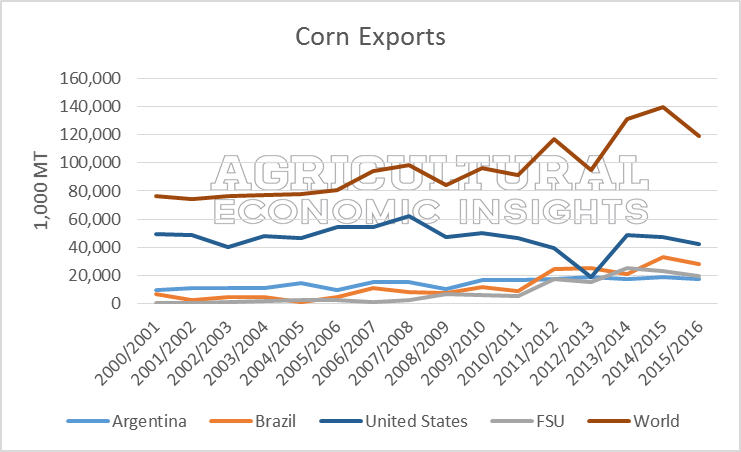 To consider how the U.S. accounts for total global exports of corn and soybeans, the data are presented in figure 5. U.S. exports of soybeans (orange) has increased over time and currently accounts for more than 40% of all global soybean exports. Corn, on the other hand, has reduced market share and has decreased from more than 60% to near 35% of total world exports. 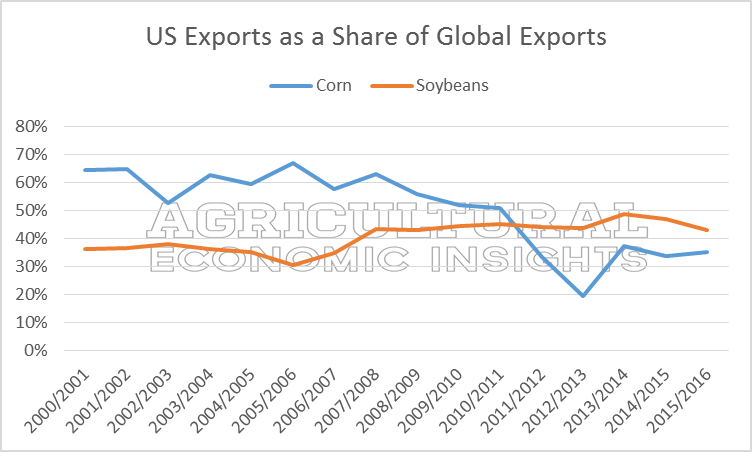 Globally, total export of corn and soybeans have trended higher over time. This has been especially true for soybeans (Figure 3). Corn exports have been more volatile in recent years (Figure 4). As the global exports market has grown (total exports), the distribution, or market shares, have shifted over time. Brazil has increased both soybean and corn exports. The FSU region has also been a large driver in corn exports.

Overall, U.S. corn and soybean exports are down in 2015/2016. These departures are important and significant, but not a disastrous collapse. This is especially true given the long-run trends that were also observed. Nonetheless, global corn and soybean production, coupled with macro-economic conditions (such as exchange rates), will be important to monitor in the coming year.

Inflation: One Big Difference Between Today and…