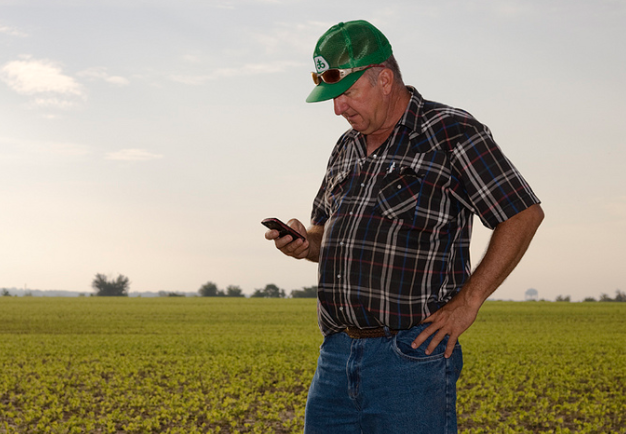 As I was traveling around the country in January and March the decline in producer attitudes or sentiment toward the agricultural economy was palpable.  Unfortunately, I didn’t have a good way to measure this or formally take a poll of attitudes and sentiment.  Well, that is one problem we won’t have to worry about anymore.  Purdue’s Center for Commercial Agriculture and the CME Group recently unveiled their newly developed Ag Economy Barometer and it formally takes a reading on attitudes toward economic conditions in the sector.  It’s not often that we get new data sources on the ag economy and I am quite excited to see how ag sentiment evolves over time.

The Ag Economy Barometer is built on a monthly survey of agricultural producers and seeks to understand how farmers perceive current and future conditions in the agricultural economy. It builds the index off of a series of simple questions about the farm economy.  Basically, these questions seek to understand producer attitudes toward the current and future conditions in the general ag economy, farm financial conditions, and the ag investment climate.  The nationwide survey also asks a series of questions about commodity price expectations and other interesting topics.  You can find the details of the survey methodology (here), the current results (here), and the charts and tables (here) .

So What’s the Mood in Farm Country?

The first results of the Ag Economy Barometer were released on May 3rd and reflect conditions as of April 2016.  When looking at the survey results it is important to understand that the attitudes are relative to those of the base period which is March 2015 to October 2015.

This type of index is sometimes called a diffusion index and is similar in construction to those used by the Kansas City Fed’s report of credit conditions (see chart 2 in this report for example). The barometer is slightly different because it summarizes the results of 5 questions and is then normalized by dividing by the average value in the base period.  Anytime that you see a value under 100 producers are viewing the current situation more negatively than in the base period.  When the value is over 100 the opposite is true.

The April reading of the barometer was 106, meaning that sentiment had improved over the base period, but what is interesting is the trajectory of the results. The readings from October 2015 to today are shown in Figure 1.  Here, one can see that the attitudes I noticed earlier were real.  Sentiment was falling rapidly from January to March when it bottomed out.  The April reading shows that sentiment improved back to levels at the end of 2015. 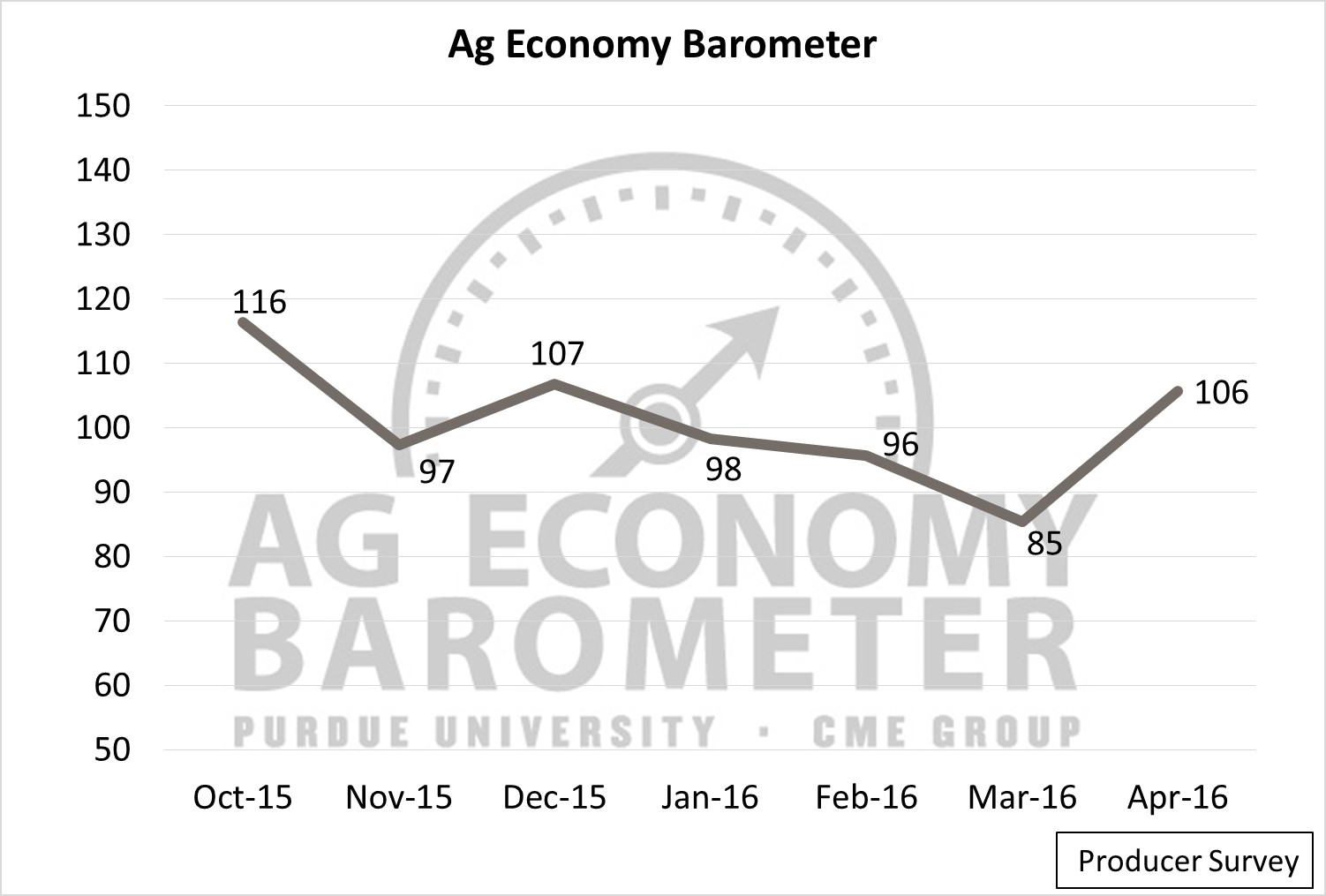 The Purdue report suggests that the increase was likely driven by improvement in commodity prices and other factors, quoting from their report: (read the full report)

“Improvements in crop prices are not the only factor leading to an improvement in producer sentiment. The uptick in sentiment corresponds to several other factors as well. Timely rains in the Great Plains beneficial to the wheat crop improved the yield and revenue outlook for many wheat producers. Favorable spring weather in the Corn Belt, which boosted planting progress above the five-year average, encouraged optimism among producers about 2016 yield prospects. Weather issues in South America, particularly in Argentina (excessive rain) and Brazil (heat and dryness), combined with a weaker U.S. dollar, and could boost prospects for U.S. grain and oilseed exports.”

Overall, it seems that the attitude in the sector is improving, but it is important to remember that 1) the comparison is against a time when attitudes were probably not overly favorable (March 2015 to October 2015, 2) we still aren’t back to even those levels, and 3) sentiment can change rather rapidly.

Some of the other data reported in the project help underscore these ideas. The results I found most interesting were from the question about whether the next 12 months would bring good or bad times financially in the agricultural economy.  This is shown in Figure 2.  Here, you can see that the overwhelming majority (76%) expected that the next 12 months would bring bad times.  To me, this is an example of the extremely negative overall sentiment in the sector. It is difficult to get people to agree on most issues, but here there is a pretty strong consensus. Almost all of the respondents expected bad times ahead in the next 12 months. 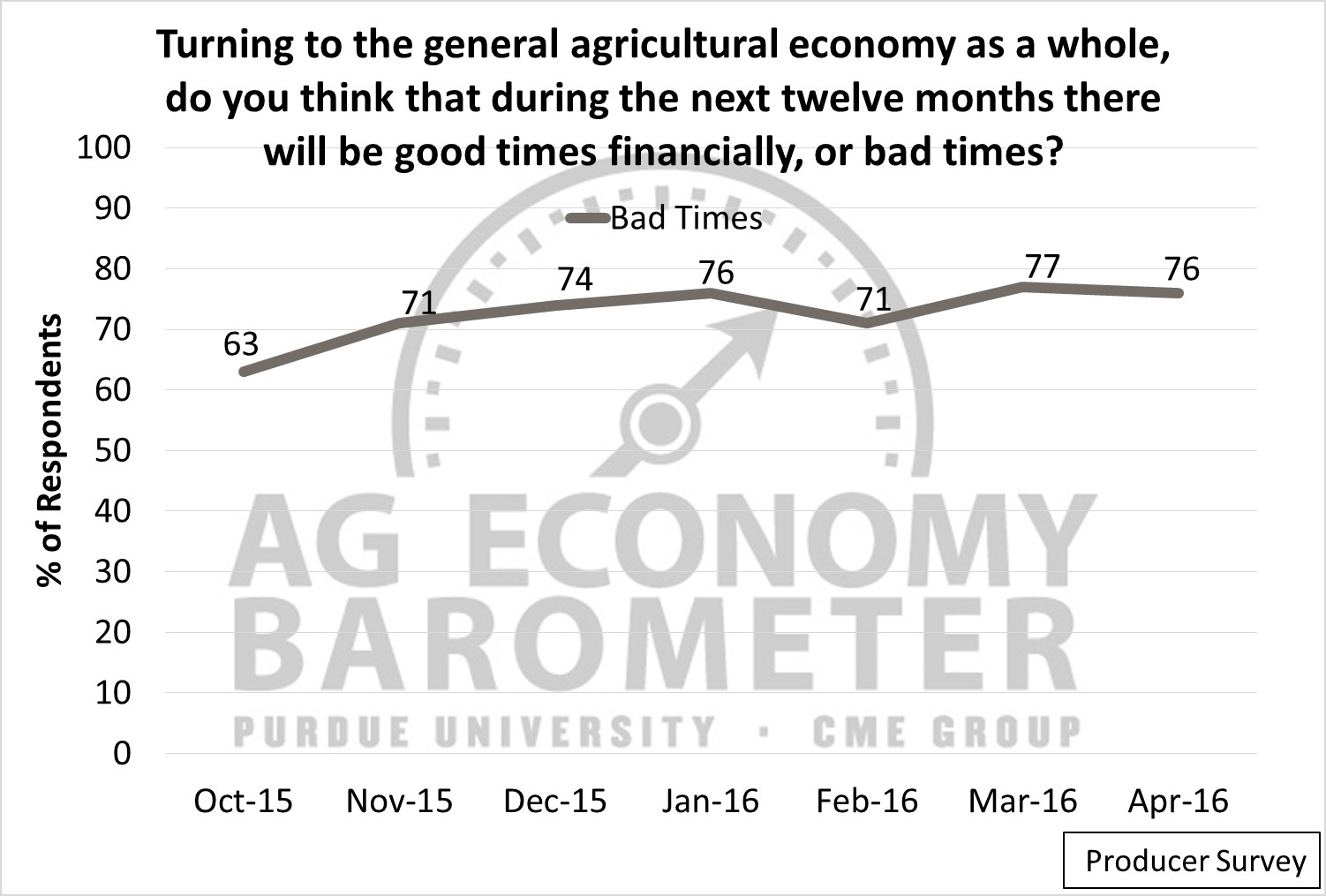 Perhaps even more interesting, the farmer attitudes are rosy compared to the survey of 100 thought leaders (Figure 3), of whom 88% expected bad financial times in the next 12 months.  The thought leader expectation index is actually less negative that at the start of the data when 100% expected bad times.  On the other hand, producer sentiment on that question has actually gotten more negative from the start of the project.  While improvement in the overall barometer is encouraging, it is clear that there is a long way to go until attitudes about financial conditions get back to levels that most would consider positive. 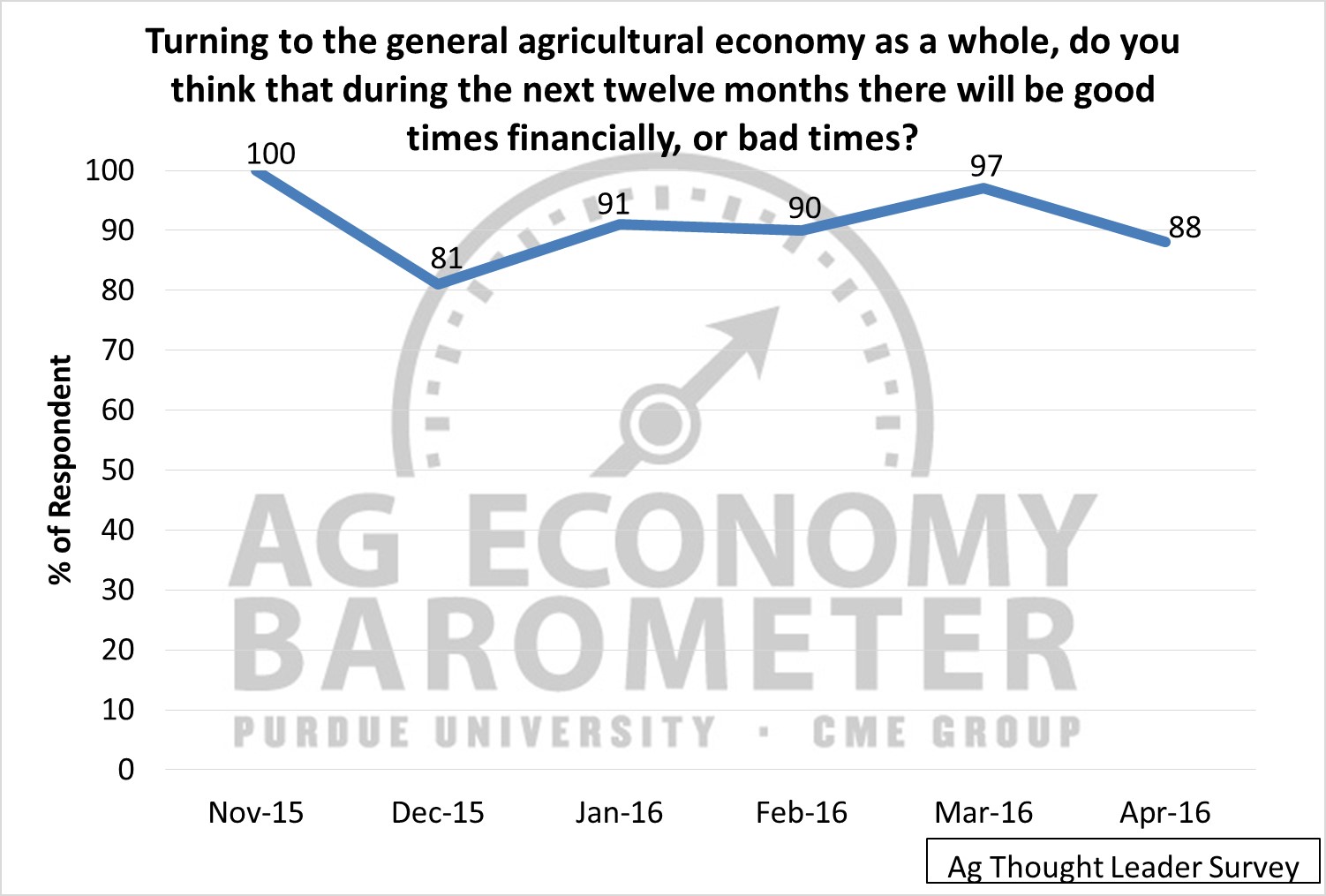 What are Other Sentiment Indicators Showing?

The results for the Kansas City and Chicago Fed districts were released in the May 12, 2016 Quarterly Survey of Agricultural Credit Conditions and are shown in Figure 4 with Chicago in blue and Kansas City in orange.  Keep in mind this is a slightly different diffusion index, it is not normalized to a base period, rather the results show the gross values of the index. 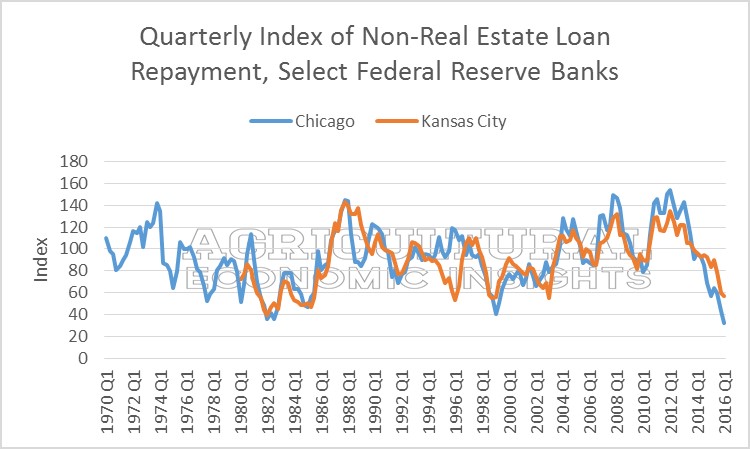 It is pretty clear that lender attitudes toward debt repayment rates can change rather quickly as the values frequently swing higher and lower.  The figure indicates that bankers surveyed by the Chicago Fed are as negative toward repayment rates as any time period shown.  In other words, many believe that repayment rates will fall in this district.  In fact, the Chicago Ag Letter reported that lenders had some pretty negative views about credit conditions.  The following is their assessment of the situation:  (read the full Ag Letter)

“The index of repayment rates for non-real-estate farm loans was 32 for the first quarter of 2016, with no responding bankers noting higher rates of repayment than a year ago and 68 percent noting lower rates. This result was a new low for the survey (the previous record had been set in 1982). Additionally, 56 percent of the survey respondents reported higher levels of loan renewals and extensions for the January through March period of 2016 compared with the same period last year, while 2 percent reported lower levels of them. Credit tightening in the first quarter of 2016 was also evident: 28 percent of survey respondents indi­cated that their banks required larger amounts of collateral for loans during the January through March period of 2016 relative to the same period last year, while none indicated that their banks required smaller amounts.”

Pretty negative sentiment indeed.  If you want to read some of the comments offered by respondents to the Kansas City survey you can find them here and their analysis of the situation is here.

While producer attitudes seemed to improve slightly in recent months, the sentiment in the agricultural sector continues to be quite low.  Most respondents in the Purdue-CME survey expect difficult financial times in the coming twelve months.  Ag lender sentiment also seems to point to continuing difficulty.

With commodity prices showing slight increases it is likely that ag producer sentiment might continue to improve.  The only problem is that it has a long way to go until conditions in the sector start to feel like they are worthy of more optimistic views.  The next reading of the Ag Economy Barometer and survey comes this week likely shed some light on this issue.

Is it time to ‘Make CRP Great…