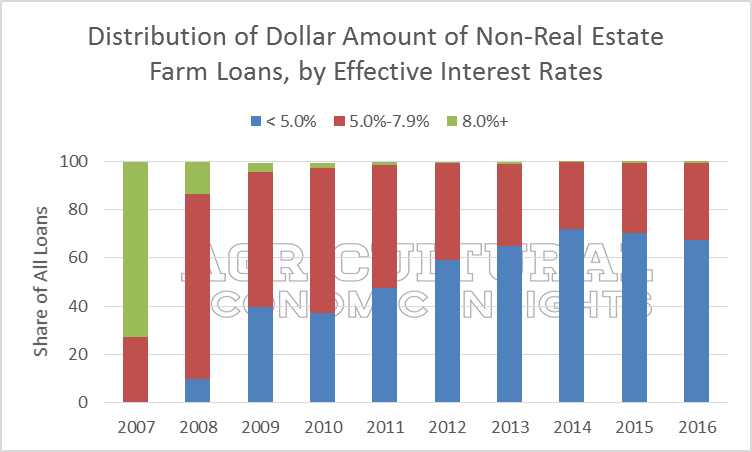 Interest rates have been a popular subject in the past few years. After years of record-low interest rates, the U.S. Federal Reserve has hinted at a policy trend of increasing rates for more than a year. Other than a small, single rate increase late in 2015, rates have mostly remained in a holding pattern. In contrast to the U.S., several other counties have lowered interest rates to negative levels in hopes of spurring their economies.

At the farm-level, interest rates have several implications. Interest rates impact farm expenses and are a key fundamental driver of farmland values. Given declining net farm income and tight margins, credit worthiness is also a consideration in agriculture today. All this led us to digging into the Kansas City Federal Reserve Bank’s data on farm loans and interest rates. Specifically, this week’s post look at the distribution of farm loan interest rates.

Interest Rates Up, But still Low

After several years of declining interest rates, rates inched higher in 2015 and 2016. The average interest rate on non-real estate farm loans for the first quarter of each year is shown in figure 1. Since 2014 average interest rates increased from 3.92% to 4.20% in 2016. While the trend is for higher rates, the rate of change has been rather slow (28 basis points over two years) and the past three years (2014-2016) are the lowest rates over the past 10 years. 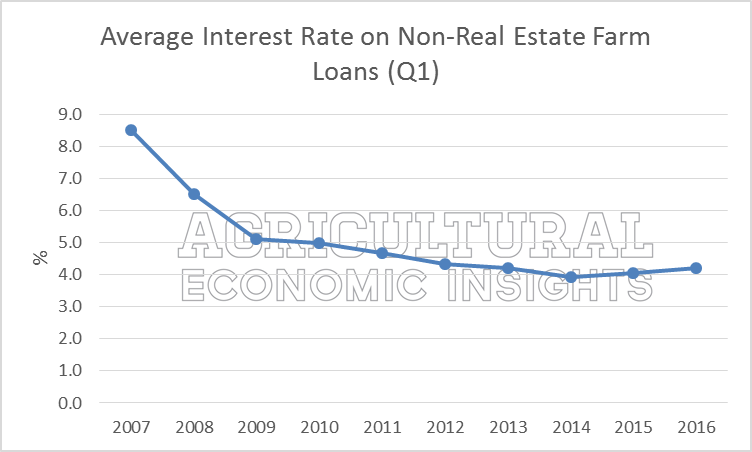 This has been an underappreciated aspect of the recent agricultural boom and current slow-down. Producers have been able to borrow money at exceptionally low interest rates. 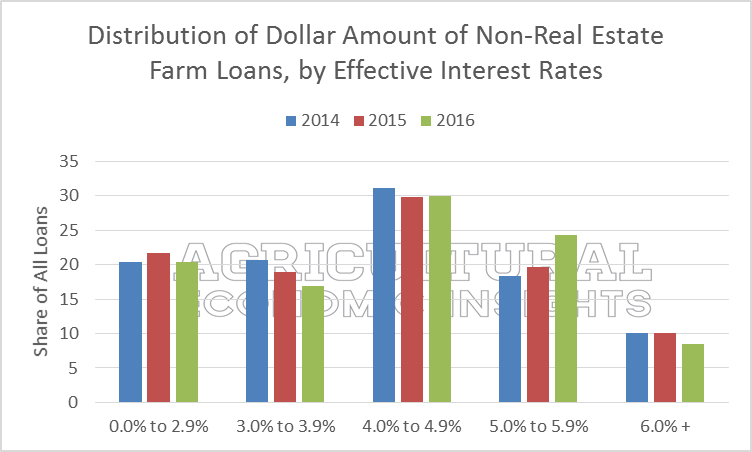 Even though interest rates on non-real estate farm loans have ticked higher in recent years (figure 1), current rates are still among the lowest in 10 years. Further, two-thirds of loans are at rates of less than 5%, an interest rate level that fewer than 1% of loans were made at a decade ago! This has been an important supporter of the ag economy in recent years.

Taking a closer look at conditions since 2014, data reveal the small uptick in interest rates on average.  This occurred as a larger share of ag loans were made with rates between 5.0% and 5.9%. This is noteworthy as the shift of higher rates has not been across the board or on the extremes. Furthermore, this will be an important distribution to watch should credit conditions get more difficult in the coming months and years.