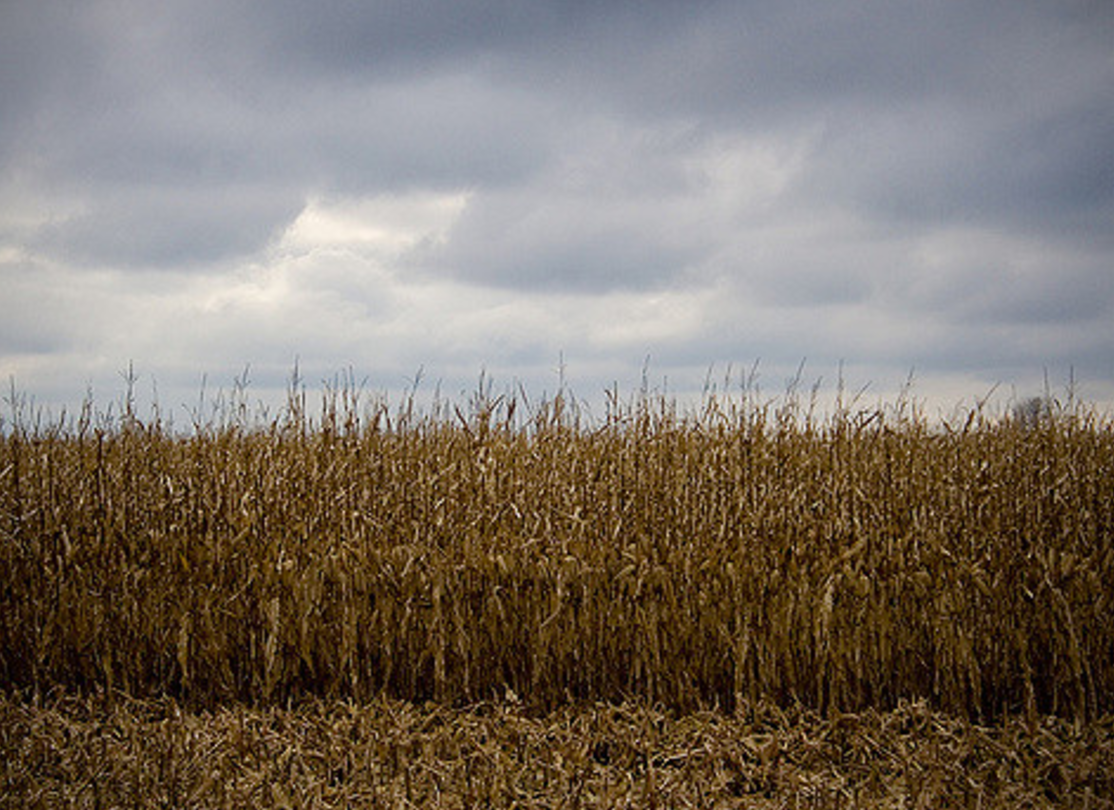 Now that harvest is rapidly winding its way way to completion, many farm tenants and landowners will quickly turn their attention to cash rental rates for 2017.  Cash rental rate decisions and discussions can often be challenging, especially in times of rapid commodity price changes. It is no surprise that cash rent and farmland values probably account for largest number of questions that we receive from readers and seminar participants.

Since David and I started writing these articles, we have written extensively about cash rental rates.  For instance, David recently addressed how rental rates changed at the county level in this post.   I was recently reflecting on the articles and topics that we have addressed in the last two years and came across the second post that we published on this site.  It provided a perspective on changes in cash rental rates from mid-2014.

I have copied it below since many of our current readers may not have had a chance to read it. I think much of the content and topic is quite relevant today and I think readers will find the discussion of the cash rental adjustment process interesting.

Just to set the stage, in 2014 commodity prices had just started their decline and there was a lot of discussion about whether rental rates would quickly adjust lower.  At the time it was not clear that commodity prices would remain at depressed levels.  In the post we talked about how expectations would influence cash rental adjustments.  We noted that we had rarely seen cash rental rates decline by more than 5 percent in any single year.  In analyzing the situation we plotted cash rental rate changes for Indiana farmland. I have updated that chart which is shown below. 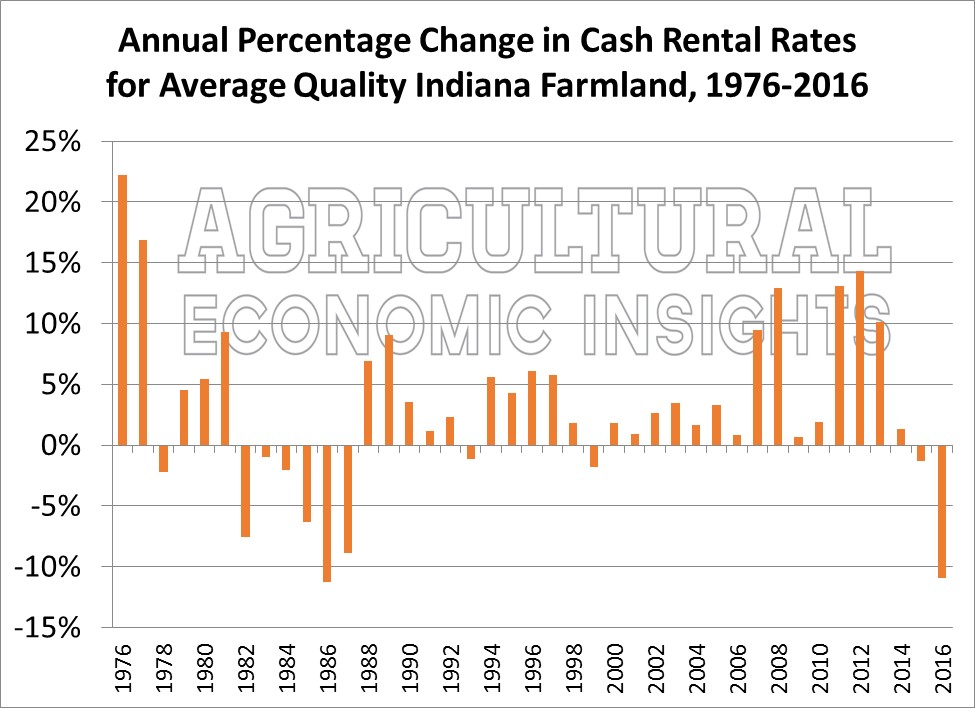 The data in Figure1 show that the declines have now begun to accelerate as the likelihood of sustained low commodity prices has taken hold.  In 2016 cash rental rates declined by 10.9% the second largest decline seen in the data. The only larger decline occurred in 1986 when rates fell by 11.2%.

Clearly, cash rents are working lower. This is in line with our thinking then and perhaps best expressed by the quote that we used to introduce the post.  Simply put, farm economics drive cash rental rates.  If farm economics undergo a sustained period of decline one should expect rents to follow.  However, I think that at the time we did not expect the prolonged downturn in farm economics that we are now experiencing.

It appears that rents may have indeed overshot to the upside in the great commodity boom.  As we noted in 2014, the cash rental rate adjustment can be significant in such situations.  A number of factors will determine where things go from here.  They include  how long commodity prices remain depressed and whether the declines continue.  As we noted in 2014, government program payments will also play an important role. With payments set to start declining for the crop to be planted in 2017, one might expect that this too will work against cash rental rates.  Time will tell.

How Much Might Cash Rents Change in the Coming Years?

In the following discussion it is important to understand that I am talking about changes in the statewide average cash rents. Individual rents can be much more variable depending on the specific situation. Additionally, there is some evidence that rents on professionally managed farms may adjust by greater magnitudes (up and down) and more frequently (see Gary Schnitkey’s article for a discussion of how rents on professionally managed Illinois farmland have changed in recent times).

In order to better understand how rents might adjust it is useful to look at the historical experience. Below are the percentage changes in cash rents and farmland values for average quality Indiana farmland reported by the Purdue land value survey from 1976 to 2013. One can quickly see that the statewide average rents rarely change by more than 10% per year.

It is also obvious that rents do go down, but usually not very much or very often. Over these 38 observations, there has been 9 instances when cash rents declined. Of those declines 5 were greater than 5% and only 1 was greater than 10% (1986). It is important to note that when rents overshoot the adjustment period can take several years to correct and can be substantial. This is the case for the declines that occurred in succession from 1982 to 1987. Together, from 1981 to 1987, a period widely regarded as the U.S. farm financial crisis, cash rent fell by 32%. 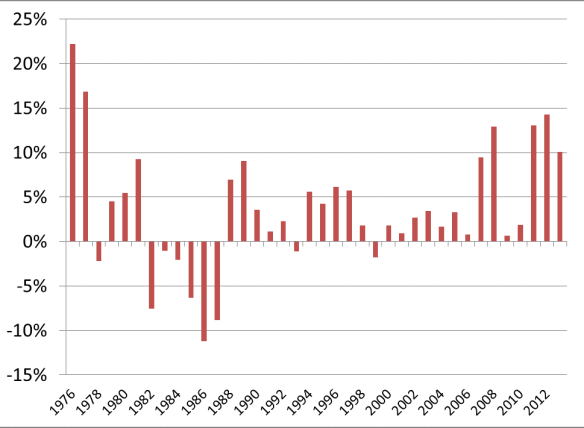 The next chart shows the percentage change in budgeted return over variable plus expected government farm program payments for average quality IN farmland alongside changes in cash rental rates over the shorter period of 1992-2013. It is important to understand that the budgeted return is the return that a farmer might expect prior planting a 50/50 corn soybean rotation on average quality Indiana farmland. The actual returns achieved differed depending on the yields and prices ultimately received.

One can see that expected contribution margins are much, much more variable than cash rental rates.  Even with several years where expected contribution margins declined, cash rents only adjusted downward in 2 years. This graph does not include the substantial declines that occurred in the 1980’s because there is no historical budgets for this period. One is also able to see the larger increases in rents that have been associated with the substantial increases in contribution margins of recent times, but in percentage terms rents have not increased as much as they did in the mid to late 70’s. 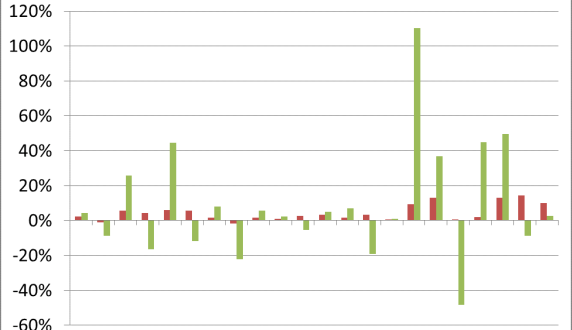 When several years of large negative price changes occurred in the 1980s rents made their major downward adjustment. However, several years of fairly large downward corn price changes in the 1990’s did not bring about the same change in rents. Why not? First, the government made substantial payments to farmers in this time period. Second, rents had just been through the large decline of the mid-80’s and likely overshot on the downside. In fact, after hitting $106 per acre in 1981 cash rents did not reach $100 per acre again for 15 years! 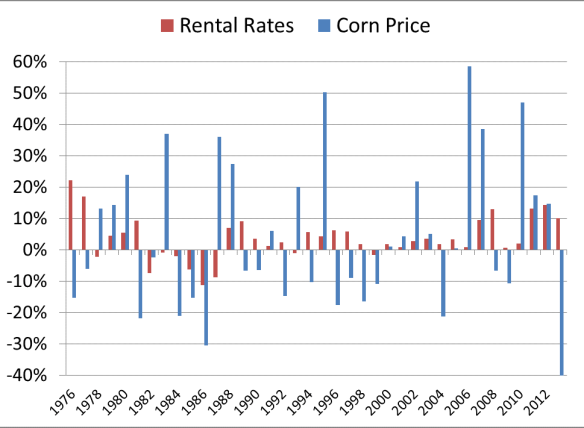 So what does this mean for the cash rental adjustment process? In the last 38 years the largest single year decline in cash rental rates was 11 percent in 1986. This occurred at the depths of the farm financial crisis during which rents ultimately declined by 32%. During the remaining 32 years statewide average cash rents declined in only 3 years.

That brings us to today (2014). In percentage terms, the most recent decline in corn prices is substantial and bigger than any that occurred in the 1980’s. One must also realize that this decline is from the drought induced high prices of 2012, which were at a level that few market participants likely thought sustainable. One might expect to see some declines in rents going forward, but changes in statewide averages of more than 5% would be large in the context of history. Observation would suggest that when rents decline substantially, it will take a period of years for them to work lower.

Were corn prices and contribution margins to show another decline like the one from 2012 to 2013 then perhaps one might question whether rents have overshot as they did in the 1980’s. If that happens expect rents to decline over a period of years. However, given the new farm bill one would expect that corn price declines of that magnitude will again result in substantial government payments to farmers, buttressing rents against an outright collapse.

If corn prices remain at current (2014) levels on should not expect to see large changes in statewide average cash rents. However, keep in mind that individual cash rent agreements signed at prices well above the state average will likely see the possibility of much more substantial price declines if the margins above variable costs continue to contract.

Defying Gravity or Starting to Fall? An…