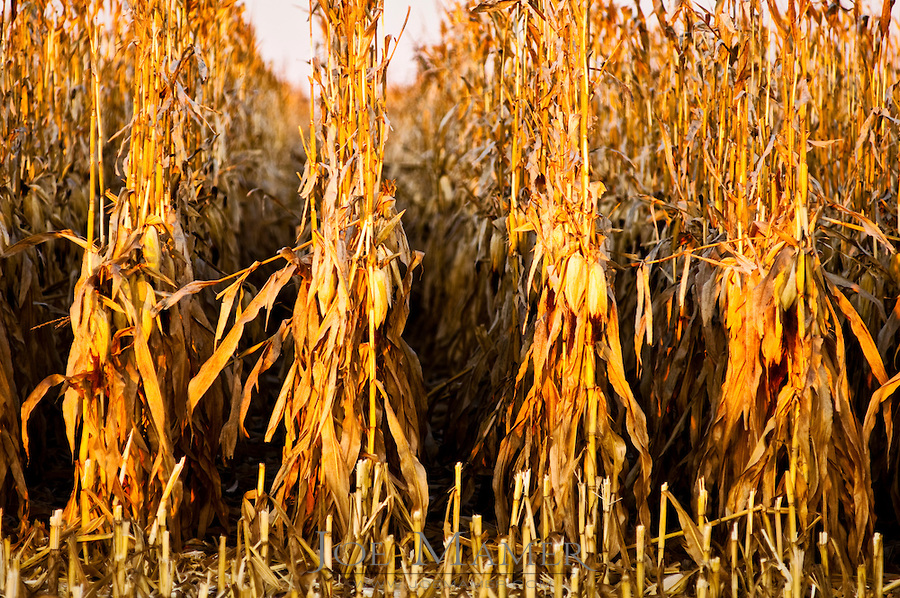 Again, the data used in this analysis is taken from the USDA’s Foreign Agriculture Service Production, Supply, and Distribution Database.

Who are the World’s Largest Corn Producers?

Last week we saw that two countries – the U.S. and China – accounted for 54% of 2016 corn consumption and the top 10 consuming nations accounted for 78% of corn consumption.  Table 1 shows production of corn is even more concentrated.  The top two producers – again, the U.S. and China – account for 58% of production and the top ten countries produced 86% of the world’s corn in 2016.

Second, while many of us are aware that the U.S. has nearly doubled corn production since 1990 (91% increase), many countries have seen even more dramatic growth rates.   For example, Brazil, Argentina, Ukraine, and Russia have all seen spectacular rates of increase.  Of this group, Brazil’s 256% growth over that period is the smallest!

One mechanism that can be used to increase corn production is increasing the amount of land dedicated to producing it.  Table 2 shows the acreage devoted to corn production in each of these countries and how that acreage has changed over time.

Table 2.  Total Acres of Corn Harvested and Changes in Acres Harvested in the Ten Largest Corn Producing Countries as of 2016.

Yield increases have also been key to increasing corn production. The world corn yield increased at 1.3% per year from 1990-2016.  The U.S. generally produces the highest yielding corn crop in the world.  However, some countries have made significant progress toward achieving U.S. level yields.

Argentina and Ukraine have both shown substantial improvement relative to the U.S. yields.  In the case of Ukraine their corn yields have recently crossed the world average.  This is a considerable improvement after spending many years with yields bouncing from just 30 to 50% of U.S. levels.  Argentina has also made significant strides in corn yields.  In the last seven years, they have regularly attained corn yields at 70% of U.S. levels. 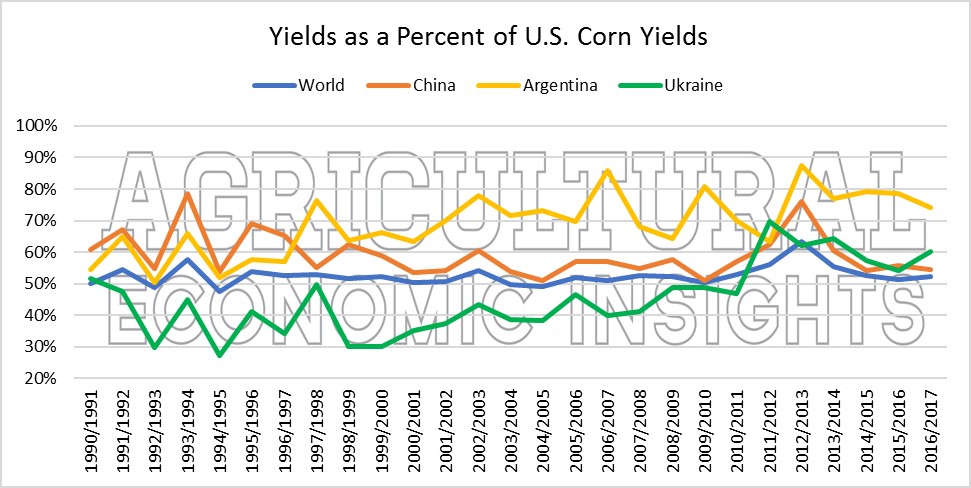 The changes were calculated by holding area constant for a given year and calculating the yield impact and then holding yield constant and calculating the area impact. The combined impact is approximately equal to the total change in corn production. The approach is like the one that we used in this post and similar to the approach used by the ERS to generate this chart. It should be noted that there are other more sophisticated and precise methods that can be used to estimate these impacts, but we will stick with the simple approach here.

Figure 2.  Increase in World Corn Production Due to Changes in Yield and Harvested Area, 1990-2016.

Since 1990, 56% of the increase in world corn production has been achieved through higher yields, and the remaining 44% has come from increased acres in corn production. It is interesting to see how this graph differs across countries. Below we show these graphs for the U.S. and China.

What is immediately obvious is the relative size of the yellow (yield) and green (acreage) areas.  In the case of China, much of the increased production 67% has come through increasing acreage (green). In the U.S., the proportions are roughly reversed with 37%  coming from increasing acreage.  For those interested in some other countries you can find Brazil here (yield increases dominate) and Argentina here (looks a lot like China).

Figure 3.  Increase in Chinese Corn Production Due to Changes in Yield and Harvested Area, 1990-2016.

The world has significantly increased corn production in recent years. Countries can expand corn production through a combination of increasing yields and increasing the land area devoted to a crop.  In the case of corn, both factors have been used extensively.

The U.S. continues to produce the highest corn yields in the world.  The average corn yield in the world is roughly at the same level relative to U.S. production as it was in 1990.  In other words, it does not appear that U.S. yields are significantly falling back to the pack.  However, some countries have made strides.  Notable among those are Argentina which regularly produces yields that are within 20% of U.S. levels.  Others, such as the Ukraine, are not yet close to U.S. production levels, but have significantly increased their yields in recent years.

Our simple estimates indicate that roughly 55% of the world increase in corn production has resulted from increased yields and 45% from increased acreage. In the U.S., this proportion about 37% for area and 63% from yields.  As we go forward it will be important to monitor yields in the major corn producing countries to determine if they can gain further ground on the U.S.  In the case of China, it will be key make strides in yields if they are to continue to increase production.