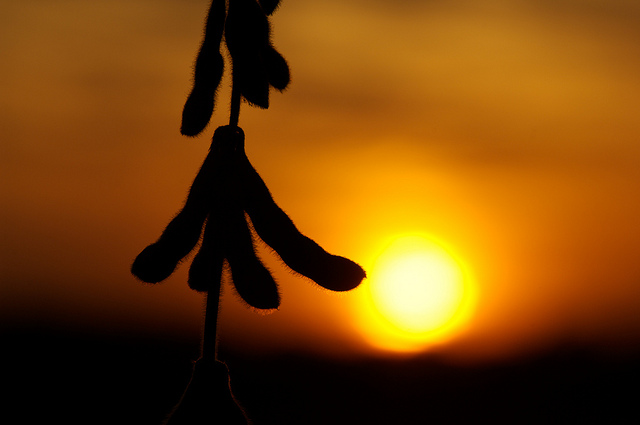 When you think of March, two big events come to mind: the NCAA’s March Madness and the USDA’s Planting Intentions report. In both cases, speculation and anticipation is in full force on how the brackets and balance sheets will sort out. Furthermore, both the NCAA tournament and U.S. spring crop plantings will likely have a few surprises.

This week’s post takes a look at the latest crop insurance and commodity price data to provide some insights on what 2017 planting might have in store.

Similar calculations for soybeans are shown in Table 2.  Here, one can see that the revenue guarantee for soybeans is considerably ($65 per acre) higher in 2017 than 2016.  While variable cost increases have eaten away at some of the gain, the net revenue guarantee for soybeans has increased $36 per acre over 2016.  Unlike corn, the net guarantee is higher than at any time in the last three years and exceeds the corn net by $47 per acre.  This is one reason that many people expect soybean acres to increase.

Still, it is important to realize that the data in Tables 1 and 2 represent an approximation to conditions in Indiana.  One should keep in mind that costs, yields, and farm level prices will vary considerably throughout the country.  As we pointed out in an earlier post, these differences can be significant and lead to different conclusions for different situations.  Still, for a farm with a similar situation as depicted in these tables one would think that soybeans would be very, very competitive with corn.

Another way to assess the relative attractiveness is to construct the ratio of soybean to corn prices. This ratio is shown in Figure 1.  In it we graph the ratio of the crop insurance prices as well as those found in the Purdue crop budgets.  As one can see, the current soybean to corn crop insurance price ratio is at its highest level over the period of 2007 to 2017.  This is just more evidence of the relative attractiveness of soybeans versus corn. However, one should keep in mind that recent analysis by Todd Hubbs and Darrel Good at FarmDoc Daily who noted that this ratio has somewhat limited ability to predict acreage shifts among the crops. 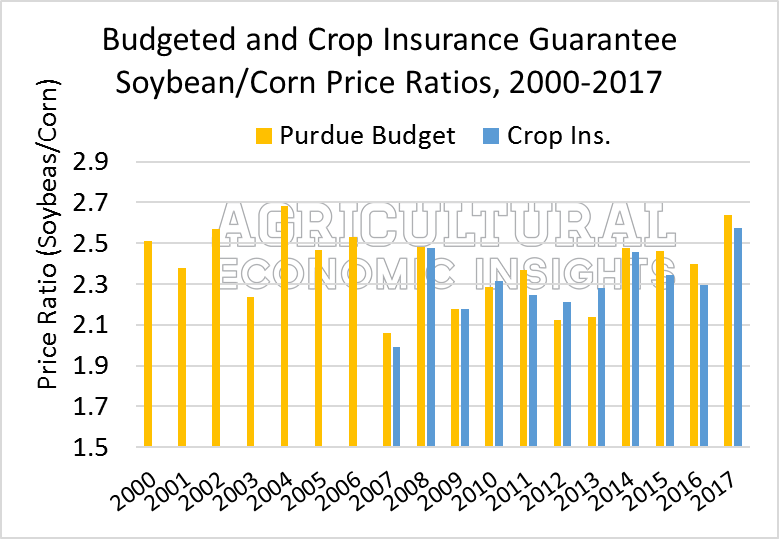 Thinking About Corn and Soybean Acres

While we (Brent and David) often speculate about the number of corn and soybean acres among ourselves, we don’t make a formal forecast – there are just too many ways to be wrong. With that said, we will provide a few thoughts on how things might shake out.

Looking to 2017 it’s completely possible to set another high for combined corn and soybean acreage. In other words, it seems plausible that the pie will continue to expand.  Why? The USDA estimated in January that U.S. winter wheat acres were set to decline by 3.75 million acres in 2017. It seems likely many of these acres will migrate to corn and soybeans.

Perhaps most noteworthy is the frequency at with the soybean share has been 48%. A total of 6 times (or 22% of the time) the soybean share of total corn/soybean acres has been 48.0%-48.9%. While these small changes in share at first seem insignificant, it is important to realize that at the 2016 planting levels each 1% amounts to 1.7 million acres. 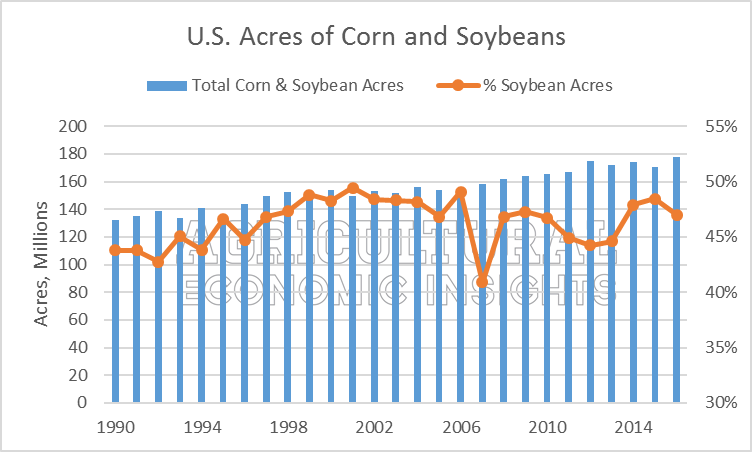 Let’s Look at a Few Scenarios

Now consider the share of total corn/soybean acres devoted to soybeans.  Here again, we look at two scenarios.  Given the crop insurance and price signals, an increase in this share seems possible. One scenario is a modest shift toward soybeans with 48% of total corn/soybean acres planted to soybean (compared to 47.0% in 2016).  While this is an increase over 2016 it is slightly less than the share of acres devoted to soybeans in 2015 (48.4%).  The second scenario is a planting rotation that strongly favors soybean (a soybean share at 49.5%).  This share is a much more aggressive assumption toward soybeans and is a level last approached in 2006 (49.1%).

Given these assumptions and scenarios, four potential outcomes of 2017 planting of corn and soybean acres is shown in Table 3. Again, these are not estimates, but rather a range of outcomes given historic data.

The magnitude of these changes are based on the assumptions we made, but these are ranges that we feel are possible and reasonable.

A couple of things are important in thinking about corn and soybean acreages.  We have framed the discussion around 1) the total number of acres devoted to these crops and 2) the distribution of acres between the two.  Of these two, the distribution may deserve the most attention. It has varied considerably in recent years and if it returns to a level of 2015 will result in significantly more soybean acres in 2017.  The total acres are also key and here the debate seems to be focused on how many acres will be gained at the expense of wheat and perhaps lost to cotton and other crops.

Overall, the assumptions that we used in this post suggest that soybean acres will likely increase anywhere from a little to a lot.  It would take scenarios outside what we have considered to result in decreased soybean acreage.  However, that is not to say it can’t happen.  Given our assumptions, corn acres declined in three of the four scenarios, but it would take a strong shift in the share of the crop going to beans to result in large declines in corn acreage.  Again, it is not to say that either situation can’t occur.

It’s important to note the USDA’s March prospective plantings estimate is subject to a lot of changes. This is because a large number of factors impact planting decisions.  The most obvious is weather. Previous yields and local economic situations are also key.  However, one of the most tricky elements of predicting plantings is that market reactions to the estimate can influence decisions.  In other words, a disconnect between the USDA’s estimate and the markets’ expectations will impact commodity prices. If changes in commodity prices are significant enough, it will begin to change producer decisions. In our post last year we used a quote by someone much wiser than us to summarize this idea and we think it is worth repeating:

Where the Farm Income Boom Happened (and…