ARC-CO Revenue Guarantees Decline Throughout Much of the U.S.

While more than half of all the counties in the U.S. saw their Olympic average yield guarantees increase, ARC-CO payments are based upon the combination of prices and yields or revenues.  The guarantee prices for corn and soybeans have fallen over the life of the program.  For example, corn prices began the program with an Olympic average of $5.29 per bushel and have fallen 9% to $4.79 for 2016.  Soybeans saw a smaller decline in the benchmark price falling by 3% from $12.27 to $11.87.  Wheat actually saw a slight increase rising from $6.60 to $6.70.

There are a few interesting things that can be observed in these graphics.  First, there were several counties that saw rather large declines in benchmark corn revenue guarantees.  In the case of corn, counties colored red saw their benchmark revenue decline by at least $100 per acre.  These counties are most prevalent in Minnesota, Indiana and Ohio and Texas. Second, there are only a small number of counties in the corn belt that saw revenue increases.  For those interested in how the split practice counties fared, click on the links for maps for irrigated corn and non-irrigated corn. 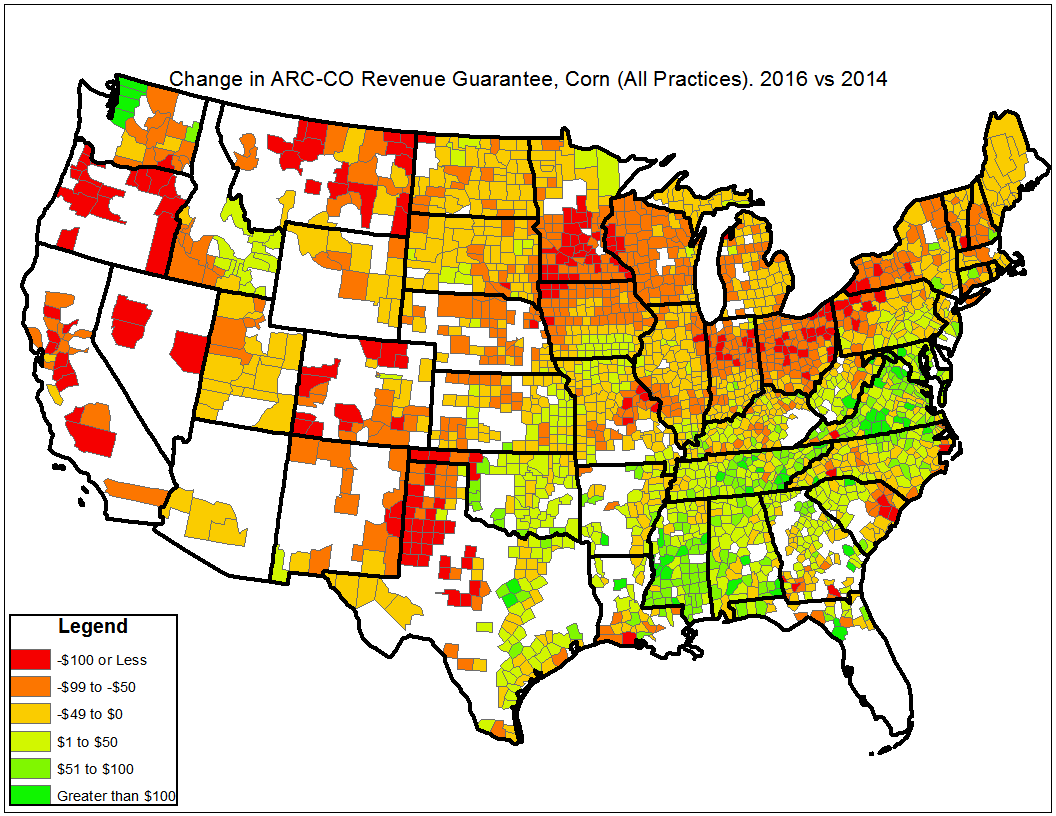 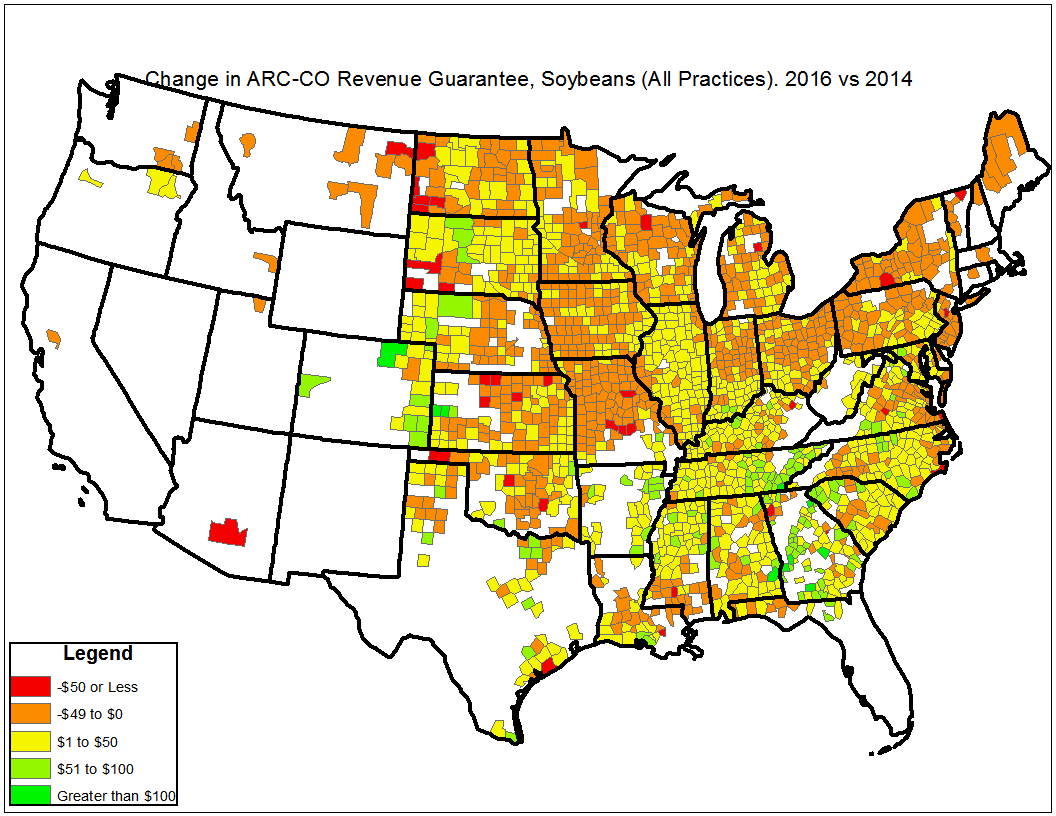 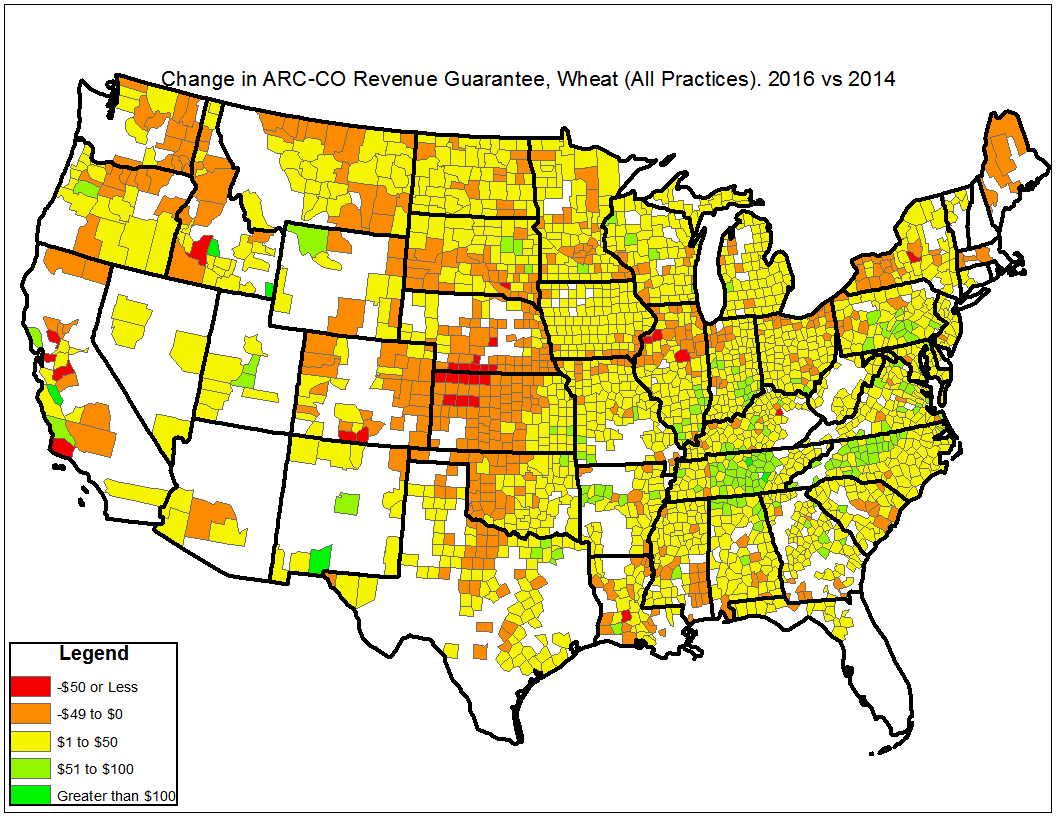 The ARC-CO revenue guarantees have started to decline in many counties. This is particularly true for corn whose price has declined by more than that of soybeans.  Unfortunately, it appears that these initial declines are only the beginning and that further revenue declines are highly likely.

Take corn for example.  Art Barnaby reports that Kansas State’s March 31st estimate of the 2016 market year average corn price at $3.30 per bushel.   Unless, the 2016 market year average price is above $3.70 per bushel the benchmark corn price will fall to $3.95 per bushel in 2017.  This would be a 25% decline from its initial ARC-CO price guarantee.  The potential declines for the 2017 guarantee prices in soybeans and wheat are less extreme, but still point to declines in revenue guarantees.