There has been a lot of talk about Spring planting progress and yield concerns in light of cool, wet May weather. Further speculation about the 2017 crop has been fueled by media reports of higher than normal replant acres. While there is little doubt the weather has resulted in reduced yield potential for some, it’s likely too early to understand what the overall, national impacts might be. While yields are important, an often overlooked weather impact is prevented plantings; acres that were intended for planting but never happened. This week’s post take a look at historic prevented planting acres and considers the impact of a swing in these acres. 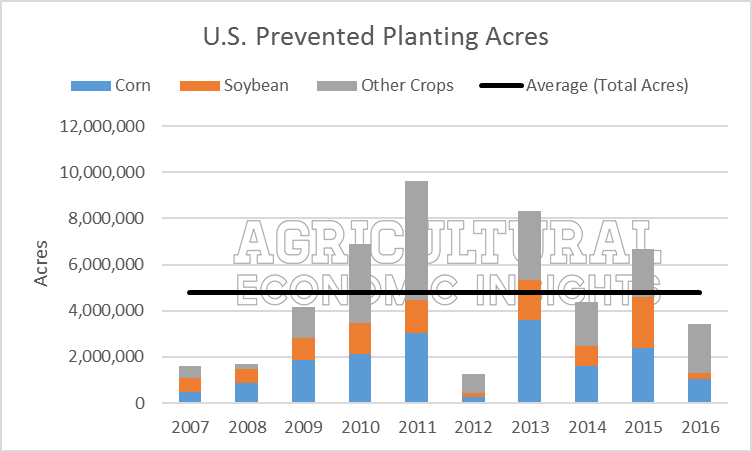 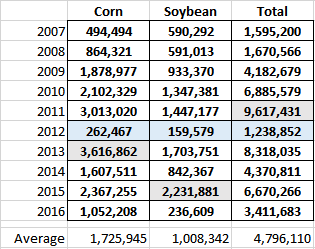 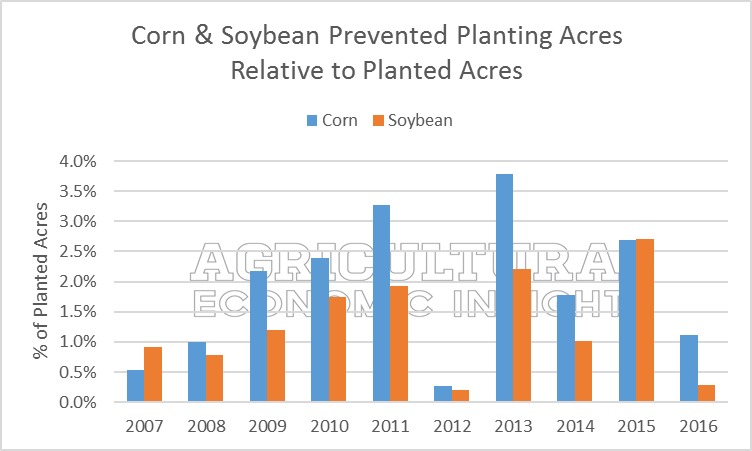 To illustrate the impacts prevented planting can have, we considered what 2016 production might have been like if prevented plantings were at their highest levels (3.6 million in 2013) and lowest levels (262,000 in 2012). In both cases, the 2016 national yield of 174.6 bushels per acre was used.  Obviously, when planting conditions are extremely bad or good it can impact yields as well, but we will suspend that fact here.

On the high side, record high prevented planting acres in 2016 (3.6 million rather than 1.9 million) would have resulted in 448 million fewer bushels of production. Again, given 2016 ending stocks of 2,295 million bushels, this would have had a significant impact (ending stocks of 12.6% vs 15.7%). Furthermore, the change in production would have been similar in magnitude to a 5.2 bushel per acre drop in national yields.

A lot of attention and focus in recent months has been on weather related impacts to yield. An often-overlooked impact of the unfavorable planting weather could be an increase in prevented planting acres.

Who Hasn't Had Big Crop Yields During…

How Has Your State Fared Under the…