A Look at Harvested Acres

A few weeks ago, we looked at prevented planting acres and its potential impacts on production. This got us to wondering about harvested acres. Each year, a portion of each crop planted is left unharvested, reducing total production. This week’s post takes a look at the share of planted acres that are harvested for corn, soybeans, and wheat.

First, the share of planted acres that were harvested (for grain) was calculated since 1990 (shown in figure 1). From these data, a few key observations are immediately obvious. 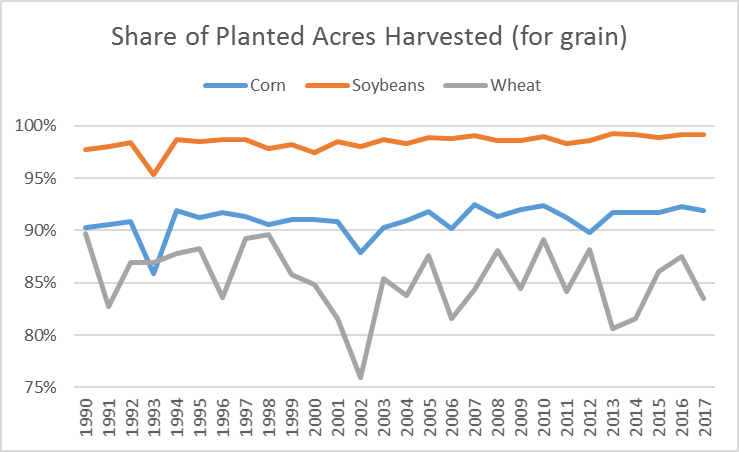 Corn was more variable than soybeans. Harvest acres were 0.5 points below the mean 37% of the time, and 0.5 points above the mean 41% of the time. Harvested corn acres were within +/- 0.5 percentage points of the mean only 6 of the 27 years.

For corn and soybeans, this could be important to keep in mind as growing season conditions become more known. While much attention will focus on yield estimates, another path to fewer (or additional) bushels of production could be with a smaller (larger) share of harvested acres.

The share of planted acres that are harvested varies across crops. Soybeans have a high share of harvested acres and there is less variability, compared to wheat and corn.

While harvested yields are often used to quantify how good (or bad) a year is, it is important to recognize harvested acres can also affect production levels. Going into 2017, the USDA’s estimate for corn and soybean harvested acres are above the average going back to 1990. For regions that have experienced extremely weather conditions in 2017, harvested acres may decline.