As 2017 got underway, the question on everyone mind was if U.S. soybean acres would exceed corn acres. While this didn’t happen, the stage was set by more favorable prices and budget returns for soybeans. Given soybeans more favorable position for U.S. producers in recent years, we step back to review the global soybean production trends. This post builds off earlier work that considered corn (here and here) and beef trends (here). More specifically, this week’s post considered changes in global soybean production, the source of those increases, and the major players.

Data from the USDA’s Foreign Agricultural Service Production, Supply, and Distribution database from 1990 to 2016 were summarized for this post.

Globally, production increased more than 237% from 1990 to 2016. In annual terms, this is equal to an average rate of growth of 4.8%. It’s worth noting that in 1990, total world soybean production was 104 million metric tons, or less than what the U.S. or Brazil individually raised in 2016.

Out of the top-ten counties, China stands out for having a very small increase in production (0.6%). We have noted this trend in earlier posts (here and here). It’s also worth noting that countries not typically synonymous with soybean production (India, Paraguay, and Canada) each accounted for a small share of total world production, but increased soybean production at a rate faster than the overall global trend. These counties could play a larger role in global markets in the future.

In Brent’s earlier post he found that global corn production from 1990 to 2016 increased at an average rate of 3.0%. While the difference between corn growth (3.0% annually) and soybeans (4.8%) seems small and insignificant, the Rule of 72 tells us that at those growth rates, corn production would double every 24 years while soybean would double in only 15. These impacts can be significant over an entire career. 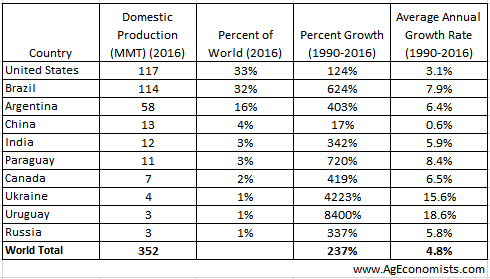 Table 2. Total Acres of Soybeans Harvested and Changes in Acres Harvested in the Ten Largest Soybean Producing Counties as of 2016. 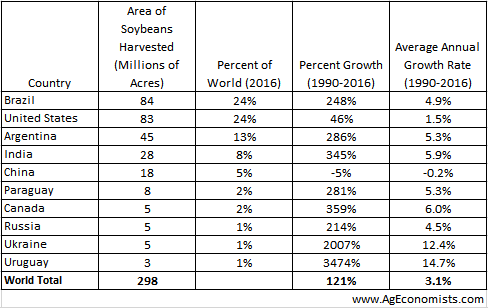 Yield vs Area- Which Has Driven Production More?

The second source of growth in soybean production is higher yields. Which of these factors, yields or acres, has driven production more?

Consistent with earlier posts, the impacts of yields and acres were calculated by 1) holding area constant for a given year and calculating the yield impact, and then 2) holding yield constant and calculating the area impact. The combined impact is roughly equal to the total change in soybean production. Again, more sophisticated and precise methods for measuring these impacts could be used, but we’ll again stick with this approach. 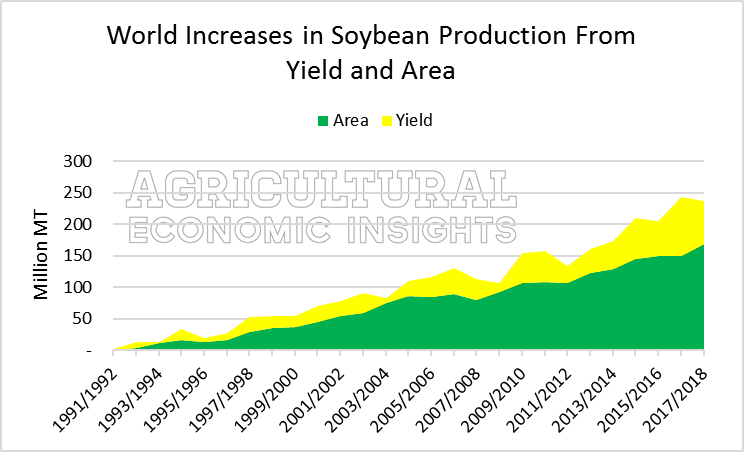 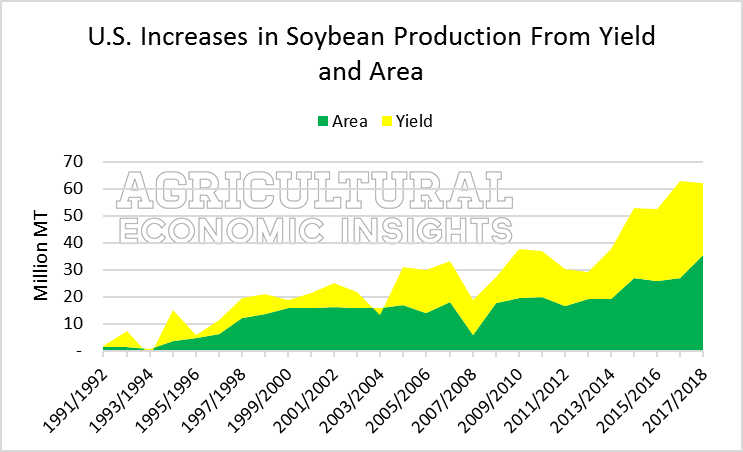 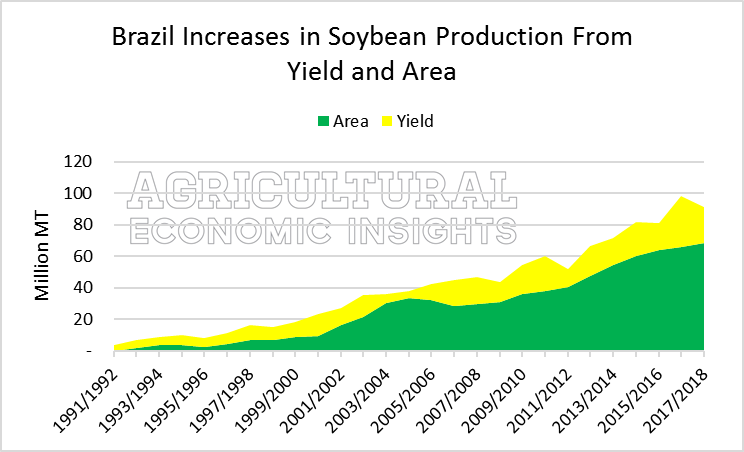 When looking at soybean production over 26 years a couple key observations standout. First, soybean production since 1990 expanded at an average rate of 4.8% annually. This rate was larger than that of corn production expansion over the same period. Second, the world is heavily reliant on the U.S. and Brazil for production. These countries accounted for 65% of production and 48% of acres in 2016. Furthermore, the combined increase in production for Brazil and the U.S. from 1990 to 2016 was equal to 66% of the increase in total global production.

Looking ahead, these trends will be important to monitor. One key question is if growth of soybean production continues to be driven primarily from expanded acres of production. Additionally, should large rates of growth in currently smaller producing countries (Argentina, India, Paraguay) continue, these countries could play a larger role in soybean production (and perhaps exports) in the coming decades.

by Brent Gloy and David Widmar With the release of the March 2016 prospective plantings report the USDA weighed in on what we saw as one of the top questions for 2016:  How many acres of corn and soybeans will U.S. producers plant in 2016?  Their answer: 93.6 million acres…

by David A. Widmar The Conservation Reserve Program (or CRP) has been in the news lately as members of Congress have called for an increase in acres. This was no surprise to us as we’ve previously written about trends in the CRP program and noted that conditions seem ripe for…

by Brent A. Gloy and David Widmar One of the most important decisions many American farmers will make this year is what crop to grow. For most in the Cornbelt that choice primarily comes down to how they allocate acres to corn and soybeans. A while back we looked at how…