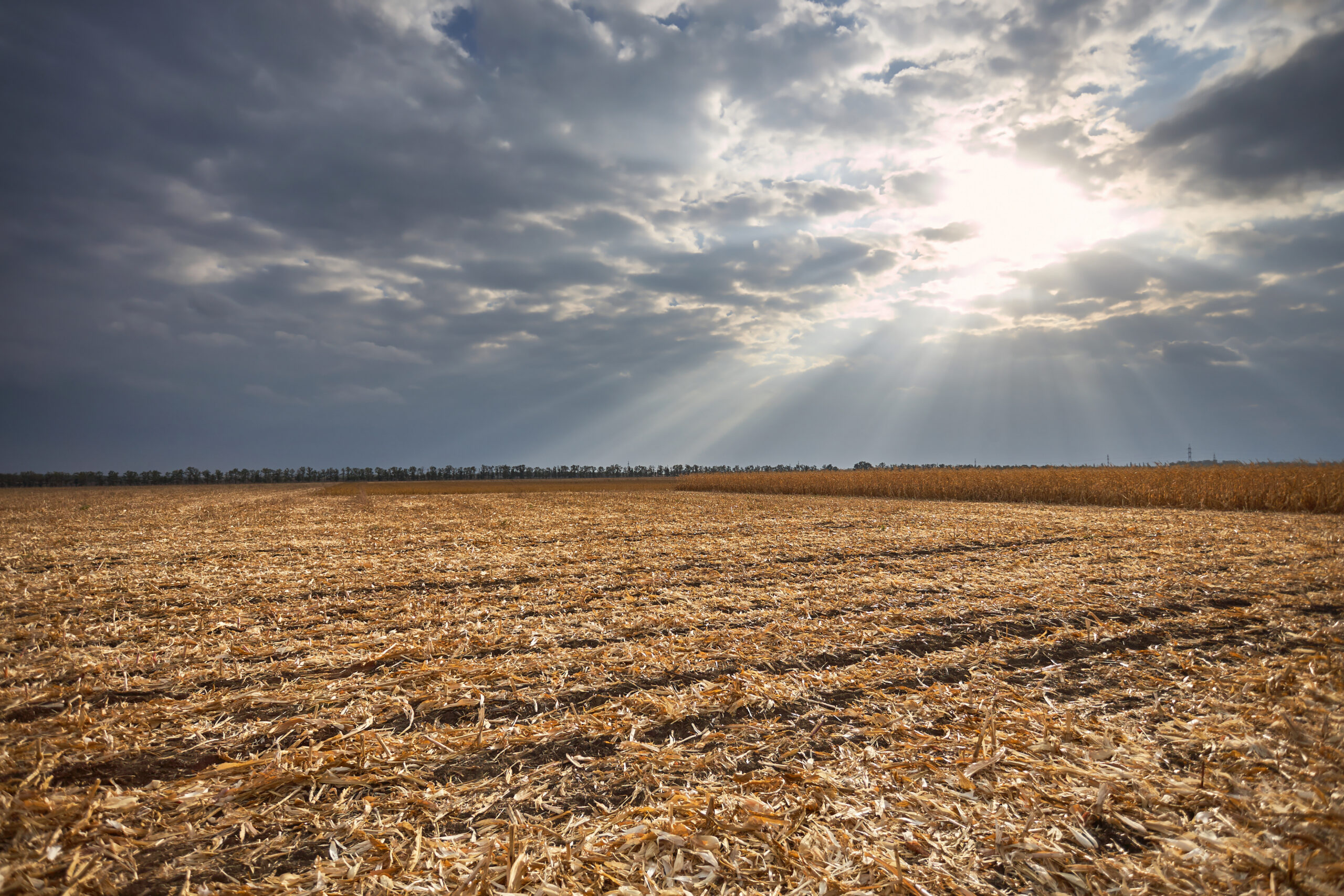 Last week the USDA released the latest estimates of U.S. net farm income. This report was popular and widely reported upon as it provided a rare, positive story about the U.S. farm economy. For the first time in four years, net farm income was estimated to turn higher in 2017. The upturn, not projected in the USDA’s February estimate, left many hoping and wondering if this signaled a bottom in the current downturn in the Ag Economy.

Currently, net farm income is estimated at $63.4 billion, 3% higher than 2016. While this is an upturn, it is important to note the current estimates are not a clear signal of good times for agriculture in 2017.

The black lines in figure 1 represent one standard deviation above and below the mean. Broadly speaking, net farm income above the top-black line signals good-times in agriculture, while income below the bottom-black line marks generally tough times. While the 2016 and 2017 estimates are near the lower black line, they have remained above this threshold. Net farm income dipped below $55.1 billion in 2002 and for several years in the early 1980s. 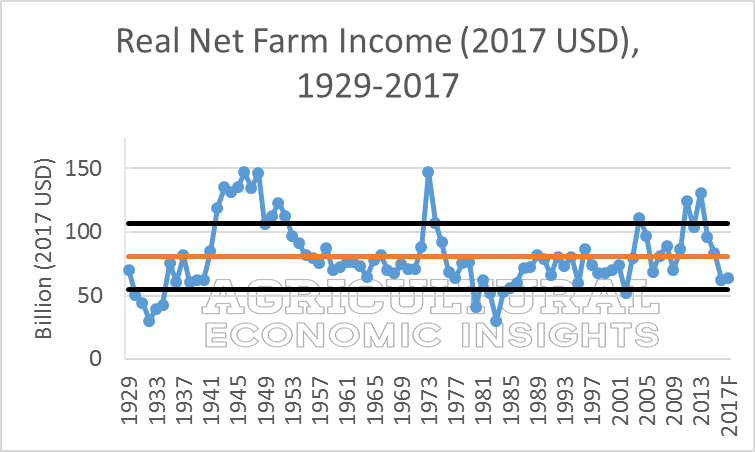 Most measuring sticks for the U.S. farm economy go back to the Farm Financial Crisis of the 1980s. In figure 2, real net farm income from 1980 to 2017 is shown (these are the same data from figure 1, just a truncated period). While today’s farm financial outlook is difficult and shouldn’t be understated, when compared inflation-adjusted net farm income, today is far from the 1980’s in two key ways. First, farm income was persistently low in the 1980s. Inflation-adjusted, net farm income was below 2017 levels ($62 billion) for seven consecutive years (1980 to 1986). 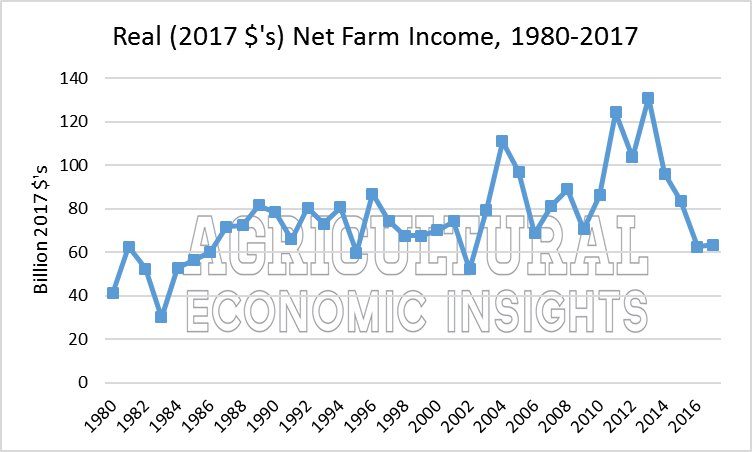 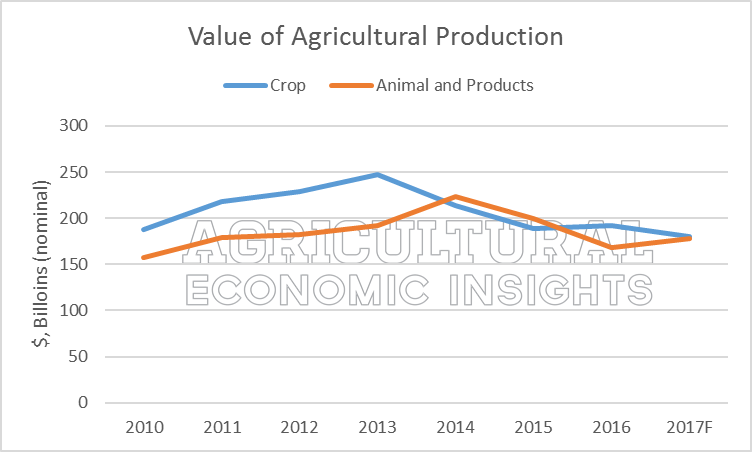 Before jumping to the conclusion that the “bottom is in” for the downturn in the ag economy, we must offer a caveat. Closely following these USDA net farm income estimates, you will realize that these can -and frequently do- change significantly.

Why so much variation? These estimates are extremely difficult to make. Any significant change in commodity prices is the most direct way these estimates might change. Other variations can arise from production levels or production expenses.

Underscoring the difficulty of estimating net farm income, the USDA refers to the current 2017 values as “forecasts” and will release more finalized “estimates” of 2017 net farm income in August and November 2018.

All this is to say 1) there will be several updates and revisions to the current estimates and 2) this story, especially given 2017 is estimated only slightly higher than 2016 levels (3% higher), could change as 2017 concludes, and estimates are finalized. In fact, the change from the August ‘forecast’ to following year’s November “estimate” has adjusted by a minimum of $8 billion since 2011.

Perhaps the best way to describe the current 2017 net farm income estimate is to qualify it: Net farm income in 2017 is currently estimated at $63.4 billion, plus or minus several billion.

Net farm income for 2017 is currently estimated to be 3% higher than in 2016. While the upturn is welcome news, it is important to note farm sector income remains historically low. The declines in net farm income since its peak has been substantial an income remains well below the long-run sector average.

Benchmarking the recent downturn to the Farm Financial Crisis of the 1980’s, it is worth noting average, sector-level conditions remain are less severe in recent years. First, net farm income in the 1980’s fell to an inflation-adjusted low of $30 billion, half of recent levels. Second, (real) net farm income in the 1980’s was persistently low, below 2017 levels for seven consecutive years.

It is frankly difficult to imagine a return to 1980’s conditions in which net farm income would 1) collapse an additional 50%, reaching $30 billion and 2) remain at or below current levels for an additional five years, until 2022.

Finally, changes in net farm income estimate can vary quite significantly over time. While the estimates for 2017 are currently higher than 2016-levels, these estimates will be adjusted for more than a year.