Millions of Corn Acres with Low Yields, And That’s Common

Social media has made communication among producers easier. It has also made it possible for expectations about national corn and soybean yields to be made by simply scrolling. In June and July of this year, it was hard not to conclude the U.S. corn crop was going to be below-trend based on Twitter posts from across the Corn Belt.

While low yields occur in parts of the country each year, how widespread must low-yields be to impact the national yield? This week’s post considers the magnitude of corn acres with low yields in recent years.

To estimate how many acres of corn are affected by low yields, county-level data – yield and acreage – were considered. First, county-level yield data from 1960 to 2016 were de-trended to adjust for the upward trend in corn yields over time. The annual departure from trend-average – or the gap between trend-adjusted yields and the trend average yield – was found for each county from 2000 to 2016. For each year, planted acres of counties with yields of 85% or less of trend-adjusted average were aggregated.

This method has limits. First, it does not account for yield variation within a county. Second, counties were only included in the annual counts if yield and acreage data were both available. Counties missing one of these data points were excluded for the respective year. Even with this limits, the method can provide meaningful insights. 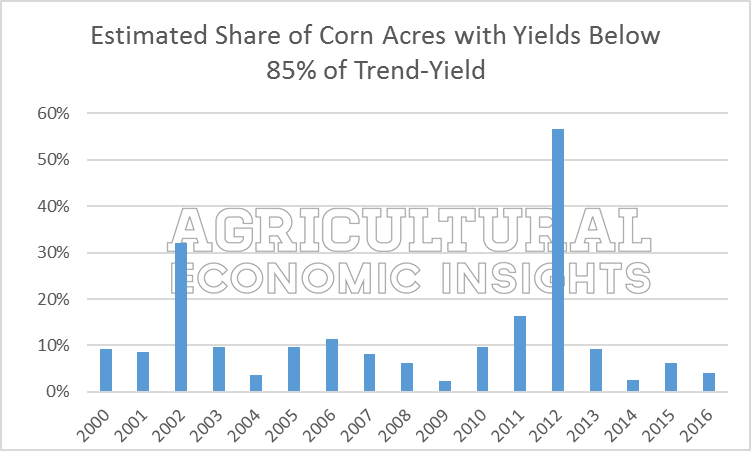 At 10.2 million acres, the 17 year average of low-yielding acres is approximately the 2017 corn acreage of Nebraska (9.8 million acres). Excluding 2002 and 2012, the low average of 6.4 million acres is larger than the 2017 corn acreage of Indiana (5.3 million acres). In other words, each year millions of corn acres have low yields. Geographically, the scale of these low-yielding acres can be larger than the acres in an entire state. One must consider this magnitude before making conclusions about the national yield potential for a given year. 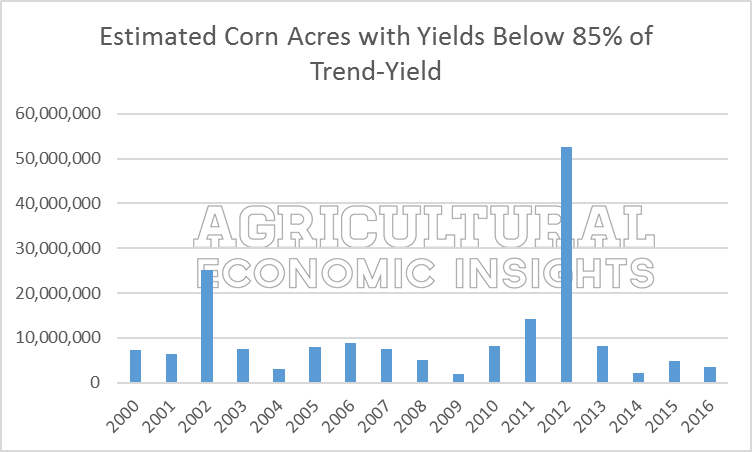 What About National Yields?

The correlation between the data from figure 1 and figure 3 is quite strong, -0.94. 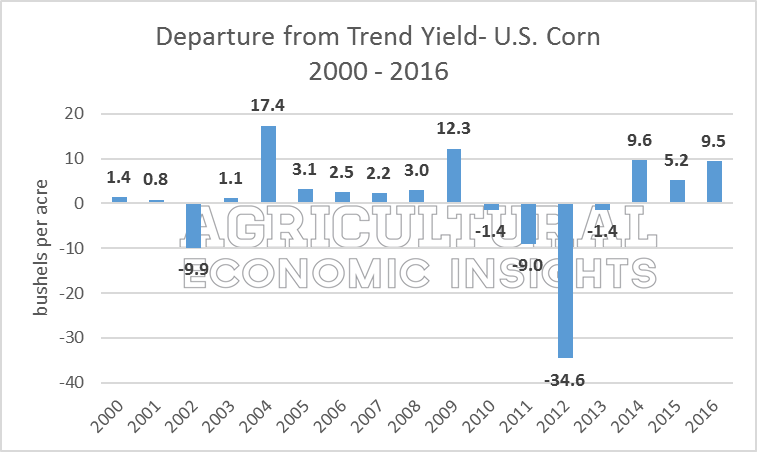 Each summer speculation about the size of the U.S. corn and soybean crops swings into full-force. Speculation, in both directions, is often supported by anecdotal evidence that is hard to dispute. In recent years, social media has made such evidence more common and more available.

There are many challenges using anecdotal reports when anticipating final U.S. yields and the related market implications.