With 2017 fall harvest underway, attention will soon begin to shift to 2018 and the annual question of how acres will sort out. The stage for the 2018 acres debate, however, is already being set as U.S. winter wheat planting is already underway.

This week’s post will take a look at acreage-trends for corn, soybean, and wheat, and how wheat acreage will set the pace for U.S. production in 2018.

Before considering 2018 specifically, it is important to step back and review recent trends in corn, soybean, and wheat acreage. In figure 1 are planted acres of these crops from 1980 to 2017. Over the 37 years, corn and soybean acres have increased while wheat acres have trended lower. Wheat acres peaked in 1981 at 88 million acres and, in 2017, reached a low of 46 million acres. In 2017, U.S. wheat acres were the fewest in nearly 100 years (data available since 1919). 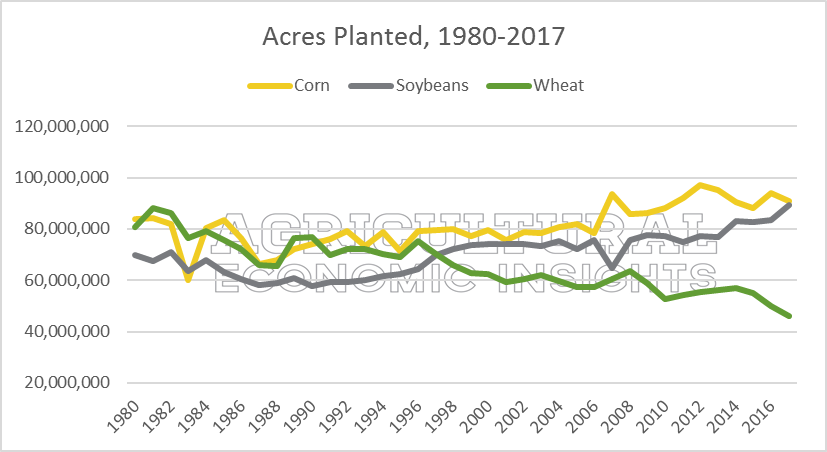 In a post last year, we noted the decline in U.S. wheat acres was quite dramatic. From 1980 to 2017, wheat acres declined at an average rate of -1.5% annually. While this annual rate seems small, small changes over 37 years can create significant shifts. Wheat acres in 2017 were down 43% from plantings in 1980.

A trend-line from 1980 to 2017 reveals wheat acres have contracted an average of 837,000 acres each year. For context, this rate was equal to losing more than a Kansas-worth of wheat acres every decade (Kansas planted 7.5 million acres in 2017). The acreage decline since 2015 has been extreme with a reduction of nearly 9 million acres, or about the 2017 wheat plantings of Kansas and Nebraska combined.

A Closer Look at Changes in Acres

The aggregate planting of these three crops increased from 213.7 million acres (2000-2004) to 226.4 million acres in 2017. These additional 12.7 million acres came from many sources – including small-acreage crops, hay, and pasture – but a large share come from a reduction in CRP acres.

Where Wheat’s Retreat has Taken Place

The decrease in wheat acres has been widespread. From the Pacific-Northwest to the Great Plains and Corn Belt, county-level decreases have been vast. 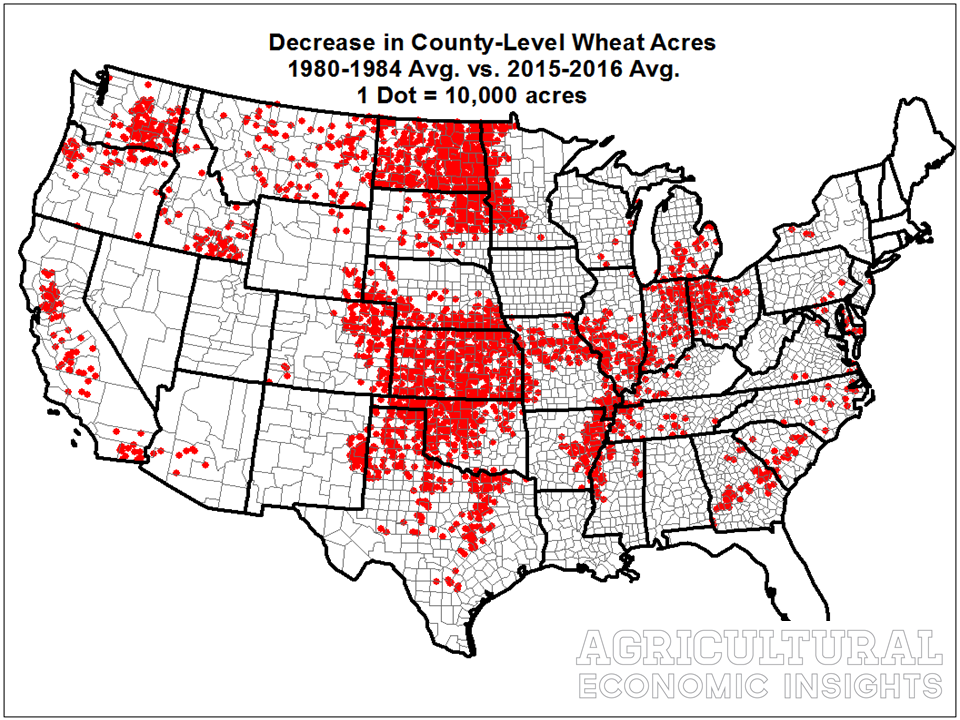 A second way of considering the decline in wheat acres is seen in figure 3. This shows the 5-year average county-level wheat acres plantings from the early 1980s to today (each dot represents 25,000 acres). The retreat in wheat acres leaves plantings in the Corn Belt quite sparse, and a reduction in the intensity of wheat acres in the Great Plains.

Producers have been planting fewer acres of wheat, creating the opportunity – or burden- for additional acres of corn and soybeans. This trend has been underway since the 1980s, but has been especially true in recent years. Planted wheat acres decreased 4.9 million acres in 2016 and another 4.1 million acres in 2017. This has led to more acres of corn and soybeans that – combined with a run of above-trend yields– has resulted in growing, burdensome stocks.

Thinking about 2018, the first question to get some resolution in January 2018 with the winter wheat seedings report. Recent pressure on corn and soybean production could stabilize if changes in wheat acres are modest. It seems unlikely that wheat acres will reduce another +4 million acres in 2018, pushing corn and soybean acres higher, but a 9 million acre reduction of wheat from 2015 to 2017 also seemed unlikely. Two key questions will be 1) will winter wheat acreage decrease, again, in 2018 and 2) what is the magnitude of any acre change.