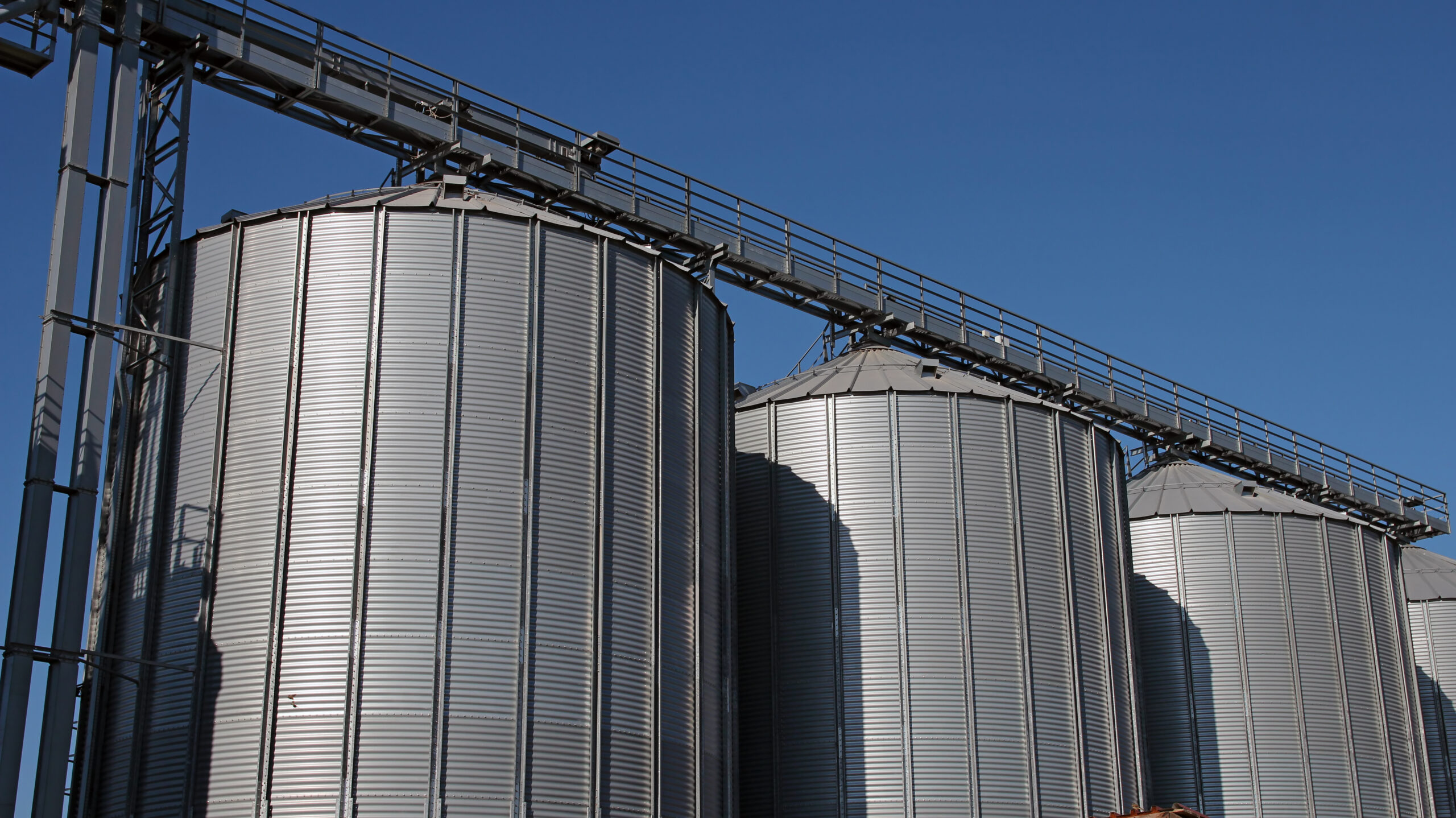 September 1 marked the end of the 2016/2017 marketing year for U.S. corn and soybeans. With the “old crop” closing, the USDA conducts its quarterly survey of grain stocks in September. The results of this report – released at the end of September – are important as they represent final ending stock for 2016/2017 and the carry-over, or beginning stocks, for 2017/2018.

The recent grain stocks report gathered much attention as many headlines focused on corn stocks – estimated at 2.29 billion bushels – reaching the highest levels since the 1980s. This week’s post considers U.S. ending stocks data and how large the 2016/2017 ending stocks are.

In Figure 1 are USDA reported ending stock for U.S. corn, soybeans, and wheat since the 1990/1991 marketing year. These data are from recent WASDE estimate (September 12, 2017) for 2017/2018. This is important to note as these September WASDE data do not reflect the later-published September stocks report. With that said, the general trends remain the same[1].

The chart quickly sums up the grain market frustration. Ending stocks, shown in millions of bushels, are at (or approaching) some of the highest levels since the early 1990s. Corn stocks are well above previous highs and have rapidly recovered from 2012’s drought-induced sub- 1 million bushel carryout levels.

Wheat stocks are expected to turn lower, but those improvements are from 25-year highs. Soybean stocks, also trending higher, are rivaling the highs of 2006/2007. 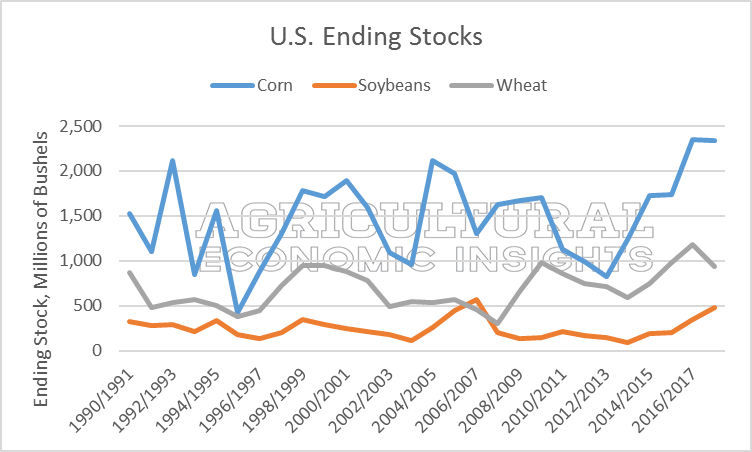 Ending Stocks to Use 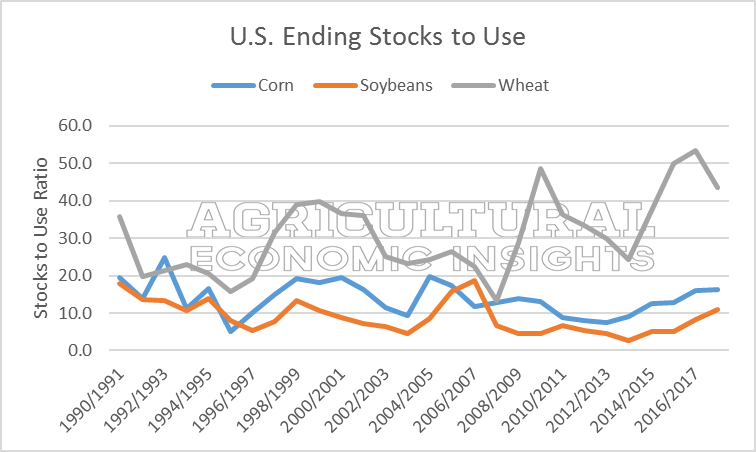 How bad a situation seems can often be impacted by 1.) how much one remembers, 2.) how much data one considers, and 3.) or how far back the graphs are drawn. For instance, if one only considers ending stock since 2010, it is a horribly bleak outlook.

We have frequently commented how current conditions being quite different from the farm crisis of the 1980s. Ending stocks, especially for corn and wheat, is certainly an important difference. 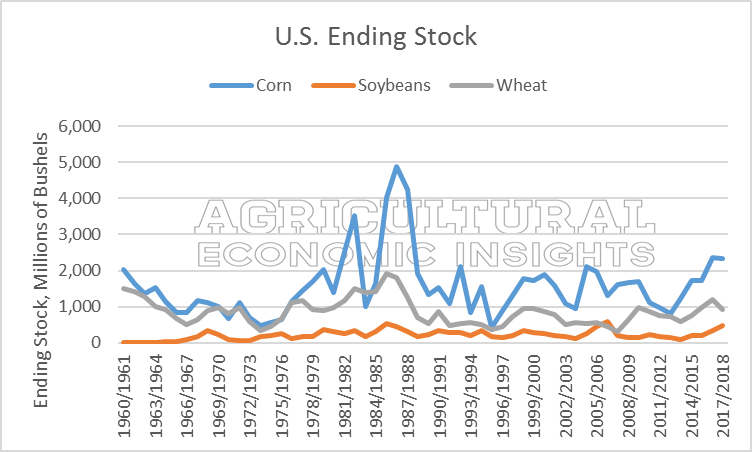 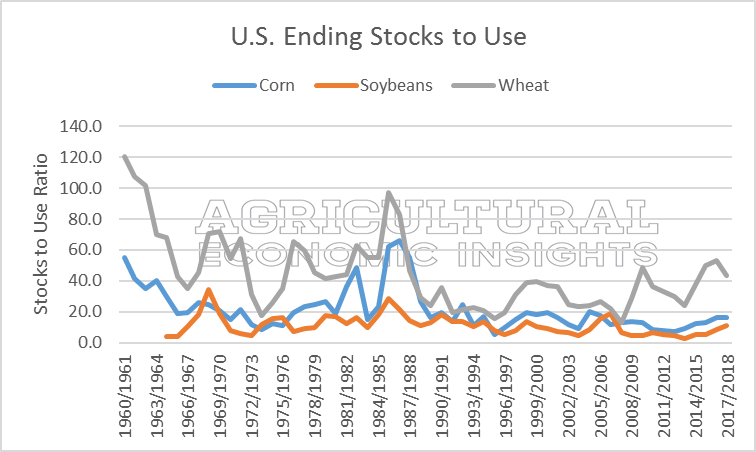 Grain stocks are important when considering the supply and demand situation. It is tricky to talk about ending stocks in absolute bushels. Considering only the data in figure 1, one might conclude something entirely different – and make different business decisions as a result – than the conclusion drawn from figure 2. A likely conclusion from figure 1 is that current corn ending stocks, at nearly 2.3 billion bushels, is a 27-year record. On the other hand, ending stocks relative to use (figure 2) are currently near 16%, a level exceeded eight times in the last 27 years (or 30% of the time).

Furthermore, the timeframe considered can also impact one’s conclusions. One could easily argue that is corn situation is 1.) The worst in nearly a decade 2.) A little higher than the average of conditions since the 1990s and 3.) On par with the best years in the 1980s.

While there are many differences between the 1980’s and today – such as inflation and interest rates– the grain stock situation is very significant. Grain stocks in the 1980’s provide context on how net farm income got so persistently low in the 1980s and why government’s policy response was quite dramatic (from government payments to idling acres).

Did the Farm Boom Create a Boom…