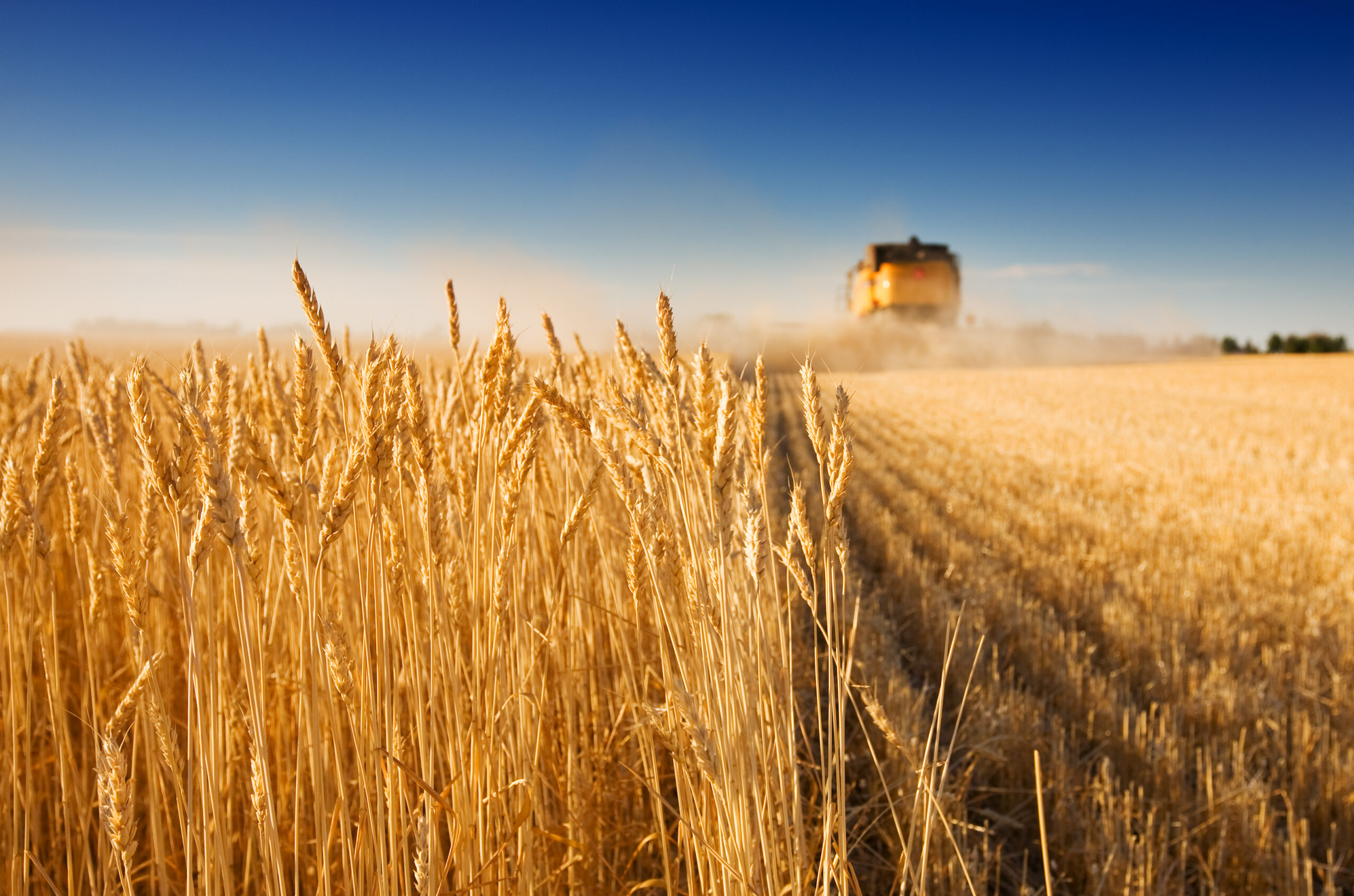 This post follows the process and methods used in our earlier posts, which have considered corn, soybeans, and beef production. More specifically, data from the USDA’s Foreign Agricultural Service Production, Supply, and Distribution database from 1990 to 2016 were summarized. 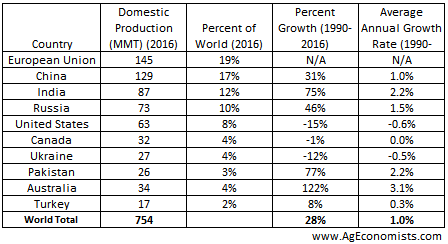 Changes in production derive from two sources – changes in acres and yields. Shown in table 2 are the trends in global wheat acreage since 1990.

Accounting for 14% of acres, India harvested the most wheat acres in 2016. The gap between India’s acreage and total production will be a trend to monitor over time as efforts to increase yields will likely have significant impacts on global production.

Overall, global wheat acreage decreased 4% since 1990. By country, Australia and India increased acreage the most while Canada (-1.8% annually) and the U.S. (-1.7% annually) have harvested fewer acres over time.

Table 2. Total Acres of Wheat Harvested and Changes in Acres Harvested in the Ten Largest Wheat Producing Counties as of 2016. 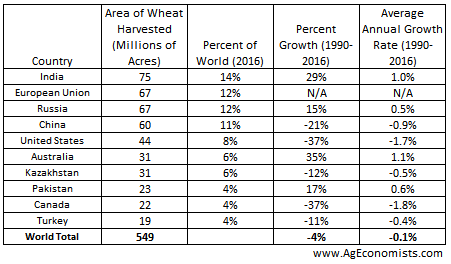 Yield vs. Acres – Which has Driven Production More?

With global wheat production trending higher (Table 1) as global acres settled lower (Table 2), it is not surprising that higher yields have been important to increased production.

Consistent with earlier posts, the impact of yields and acres were calculated by 1) holding area constant for a given year and calculating the yield impact, and then 2) holding yield constant and calculating the area impact. The combined impact is roughly equal to the total change in soybean production. Again, more sophisticated and precise methods for measuring these impacts could be used, but we will stick with this approach. 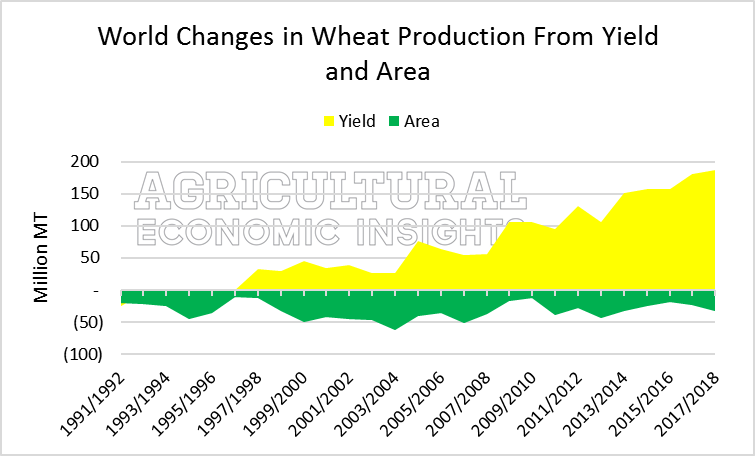 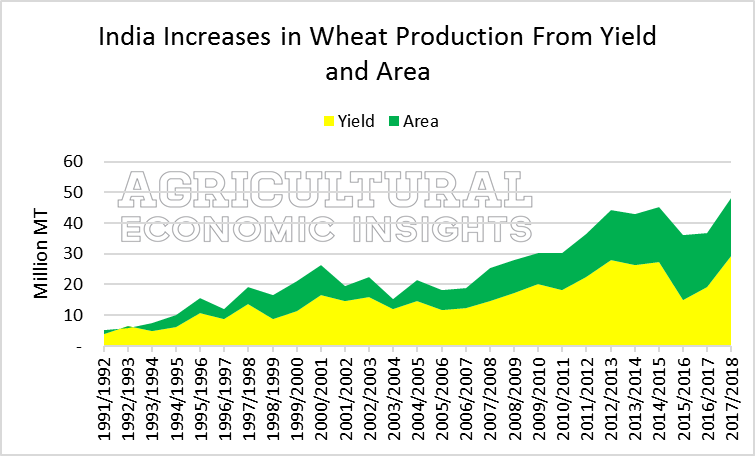 In figure 3 the trends are shown for the U.S. What makes the U.S. different is that overall wheat production has declined since 1990 – down a total of 37% (Table 1). This decline was driven by fewer acres as 125% of the total decline was attributable to fewer acres. Higher yields offset production declines. For every 100 bushels of production decline since 1990, 125 bushels of the decrease came from fewer acres while an offsetting 25-bushel increase occurred from higher yields. 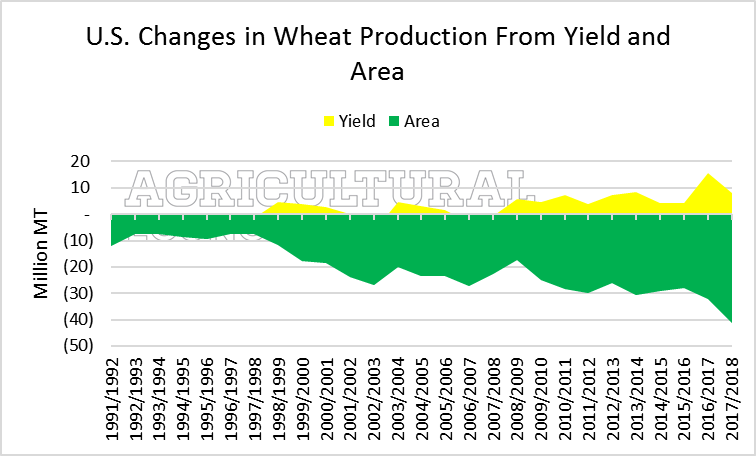 Global wheat production has increased in recent years, but at a rate much slower than observed with corn and soybeans. Furthermore, global production of wheat is more dispersed across countries and less concentrated than corn and soybean production.

Globally, wheat acres have decreased in recent decades; an extension of the trend here in the U.S. This has resulted in overall global production increases driven solely by higher yields offsetting fewer acres.

In India, significant increases in production were the result of increases in both acres and yields. In the U.S., where production has decreased since the 1990s, the production declines from reduced acres have been greater than gains from yield increases.

Did the Farm Boom Create a Boom…

Lower Fertilizer Prices in 2018? Keep an…