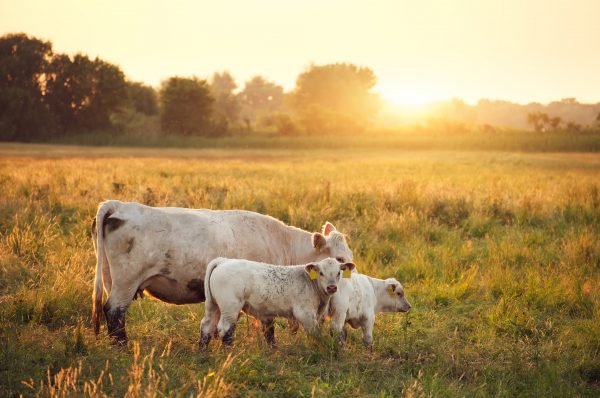 In figure 1, the size of the U.S. beef-cow herd from 2000 to 2017 is shown. Specifically, these data are based on the USDA’s January estimates as this dataset has been continuously reported. At 31.2 million, 2017 marked the third year of expansion as the herd inventory rebounded from a low of 29.1 million head in 2014.

The 2014-low was part of a significant contraction that occurred from 2008 to 2014. During these six years, the herd decreased by 3.3 million head. Even with the current expansion, which added roughly 2.1 million head, the U.S. beef-cow herd remains below mid-2000 levels. 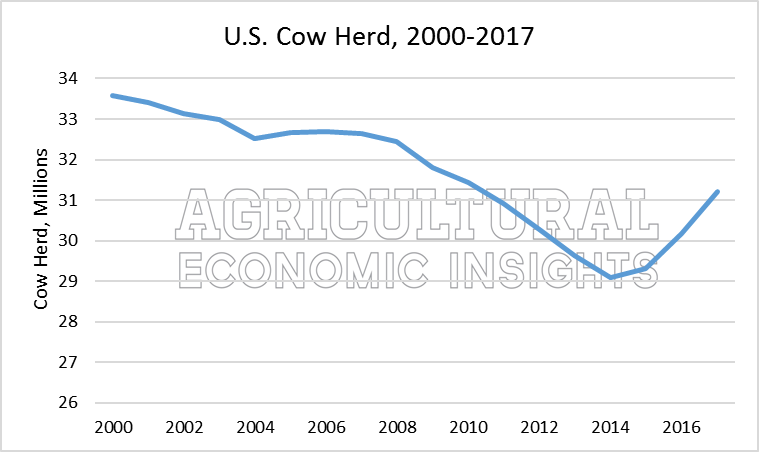 Digging deeper into the data provides insights into state-level trends. Figure 2 shows two measures of the beef-cow herd for the top-ten beef-cow states. In total, these states account for 58% of the U.S. herd (2017).

The second data point in figure 2 is the share of total U.S. herd growth from 2014 to 2017 each state accounted for (shown in orange). As mentioned earlier, the U.S. beef-cow herd expanded by more than 2.1 million head during this time.

The ten states shown in figure 2 collectively increased their herd by more than 1.5 million, equal to 72% of the total U.S. expansion. Given these states account for only 58% of the U.S. herd, expansion among these states has been at a rate faster than the rest of the country.

The expansion is especially noteworthy in Texas. Accounting for 14% of the beef-cows in 2017, Texas represented a much larger share, 26%, of the 2014-2017 expansion. Oklahoma, Missouri, and Kansas also accounted for a large share of the U.S. herd expansion. 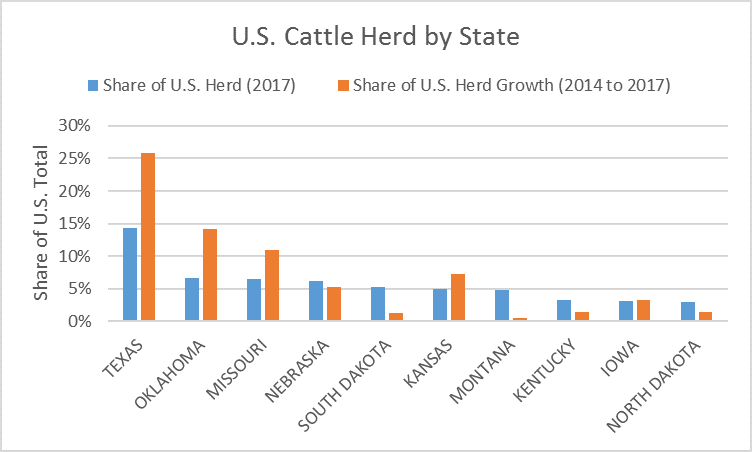 While Texas accounted for a large share of the recent expansion, it is important to note Texas also accounted for a large share of the 2008-2014 contraction. During this timeframe, when the number of U.S. beef-cows reduced by 3.3 million head, Texas alone contracted 1.2 million head, equal to 37% of the total U.S. reduction. The decline in Texas is partly attributable to the lengthy and persistent drought from 2010-2013.

Currently, the U.S. beef-cow herd is 96% of its size in 2008. Texas, however, is only at 87% of 2008-levels. Even though Texas has added more than a half-million head of beef-cows in recent years (550,000 head), it would take almost another half-million head to get it back on-par with the current, relative U.S. herd size of 96% of 2008-levels (an additional 494,000 head in Texas would be needed). This could affect the cattle industry and markets in coming years, especially if Texas remains relatively drought-free and continues to rebuild the herd.

Texas, which has the largest beef-cow herd in the U.S., has been a major player in the herd expansion. Independently, Texas accounted for one-fourth of the recent expansion while only accounting for 15% of the herd. However, Texas played an even larger role in the earlier herd contraction when the state accounted for 37% of the 2008-2014 U.S. beef-cow decline.

Looking ahead, many will be watching the size of the U.S. beef-cow herd in 2018 and beyond. Texas, already a major player, could play a critical role as the state’s current herd size, relative to 2008-levels, suggest more expansion could be possible.

This article was originally featured in the September 2017 issue of Progressive Cattleman.

Lower Fertilizer Prices in 2018? Keep an…