After several years of increasing grain stocks, the latest USDA’s Foreign Ag Service (FAS) data provides a rare piece of good news for global grain stocks. For the 2017/2018 grain marketing years, global production of corn and soybeans are currently estimated to be lower. Lower estimated production has set the stage for dwindling corn and soybean global stocks in 2017/2018.

Figure 1 highlights global stocks to consumption ratio for corn, soybeans, and wheat from 2000/2001 to 2017/2018. (See last year’s post for a look at these trends going back to the 1960’s.) While the exact timing differs for each commodity, the general trend over the last 18 years was for the stock to consumption ratios to reach a low between 2007 and 2011 before trending higher. More specifically: 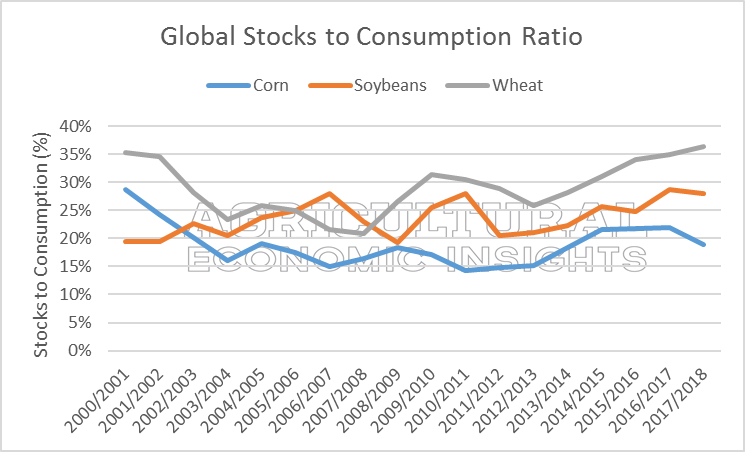 Table 1 highlights the last two years of stocks data, as well as historical averages; specifically, the stocks to consumption ratio since 2000/2001 and since the 1960s. Globally, corn is the bright spot in an era of burdensome stocks. After three years of global corn stocks holding steady at 22%, stocks in 2017/2018 are currently expected to reduce to 19%. At these levels, corn stocks are in-line with the 18-year average and well below the long-run average (since 1960).

At 19% of consumption, soybean stocks have turned slightly lower in 2017/2018; down one percentage point from 2016/2017. Still, global soybean stocks remain well above recent and long-run averages.

Finally, wheat has been the source of continued frustration. Global stocks to consumption are expected to be slightly higher in 2017/2018, reaching 36%. At these levels, stocks are the highest since 2000/2001 and well above the long-run average.

As we noted in last year’s post, China (typically a net importer and large consumer of corn, soybeans, and wheat) accounts for a large share of global grain stocks. Figure 2 shows China’s share corn, soybean, and wheat ending stocks since 2000/2001. In the first half of the 2000’s decade, China’s share of stocks trended lower. In more recent years, China’s share has trended higher again.

The uptick in China’s share has been most notable in soybeans. Prior to 2007/2008 China typically held less than 10% of global soybean stocks. However, China has typically accounted for nearly 20% of stocks in recent years.

China has a massive inventory of wheat. Current Chinese stocks of wheat account for 48% of global stocks and 110% of the countries domestic consumption. 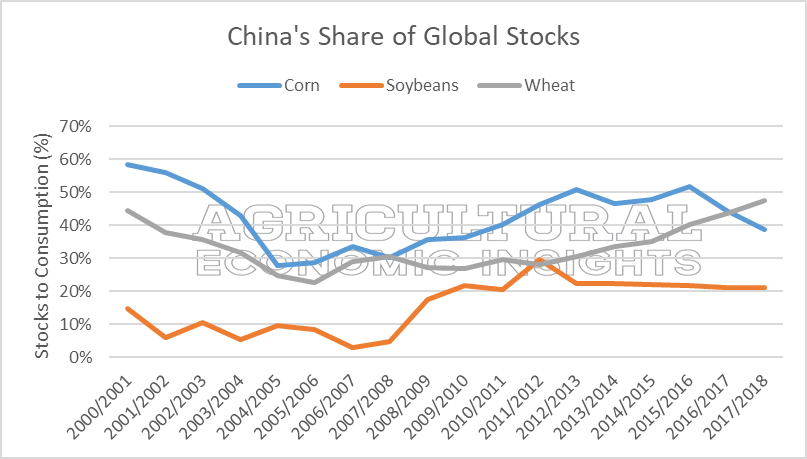 China is considered a net consumer of grain and is generally not a net exporter of grains. While China could export grains – perhaps the large inventories of corn and wheat- it’s worth considering what global inventories of grain look like in the absence of China (Figure 3). In a way, this measure represents the share of total consumption that’s generally available for export.

As expected, stocks as a share of consumption are lower for corn, wheat, and soybeans, especially for wheat. Furthermore, ending stocks ratios for all three crops trend lower into 2017/2018 when China’s stocks data are omitted. 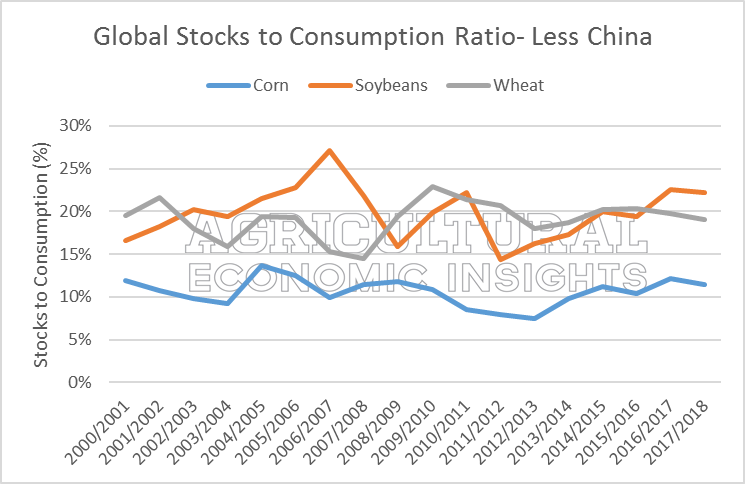 As before, Table 2 highlights global stocks to consumption ratios less China’s stocks in recent years. The biggest difference between Table 1 and Table 2 is for wheat. Wheat stocks in 2017/2018 are actually in line with the 18 year and long-run averages when China’s massive stocks are not considered. This is to say that a large portion of burdensome global wheat stocks is largely driven by China.

On the other hand, global soybean stocks remain above the two averages, even when omitting China’s soybean inventory.

For the first time in recent memory, global corn and soybean stocks – relative to consumption – are currently expected lower for the 2017/2018 market year. Declining stocks have been most significant in corn, which brings current stocks ratios in line with the 18-year average, and below the long-run average stock levels.

When thinking about global stocks, it’s important to consider China. After contracting in the early 2000’s, China’s share of global grain stocks has trended higher in the recent decade. China’s wheat stocks, which is currently more than an entire year of their domestic consumption, has steadily increased in recent years.

If one considers global stocks less China, a slightly different –and perhaps less bearish- story emerges. This is most obvious for wheat as global inventories (less China) have trended lower in recent years, and are in-line with historic averages.

While the global story for grains – and associated prices- isn’t dramatically improved, it’s important to note global grain inventories of corn and soybeans are expected to shrink in 2017/2018. This contraction, albeit small, is helpful in setting the stage for 2018.

Of course, these trends will be important to follow and monitor as underlying data are regularly updated.