U.S. Farm Cash Receipts Slightly Higher in 2017, but Way Down from Highs 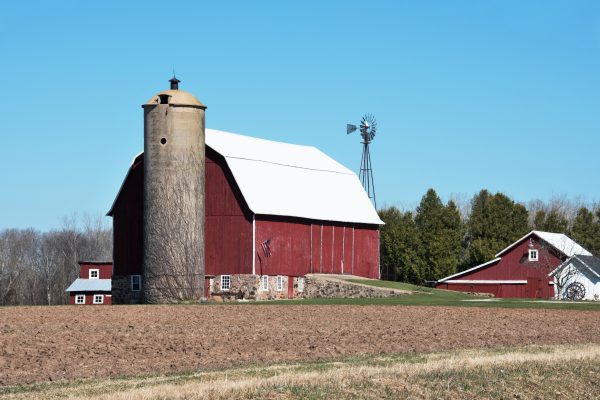 As the last crops are being harvested it is a good time to look at the economic condition across agriculture.  One of the most telling indicators of conditions is cash receipts.  Because commodity prices and yields tend to be much more volatile than costs, changes in cash receipts tend to have a large impact on the net income of the sector.  The Economic Research Service estimates that overall sector cash receipts will rise slightly in 2017.   While this offers some positive news to end the year, cash receipts for every major commodity group are well off their recent highs and most remain below longer-term averages.

Given 2016 was not a particularly good year for most commodity groups, many were hoping for improved fortunes in 2017.  For some this was the case, while for others 2017 also proved to be quite challenging.  Figure 1 shows the percent change in cash receipts for most major crop and livestock commodities from 2016 to 2017. 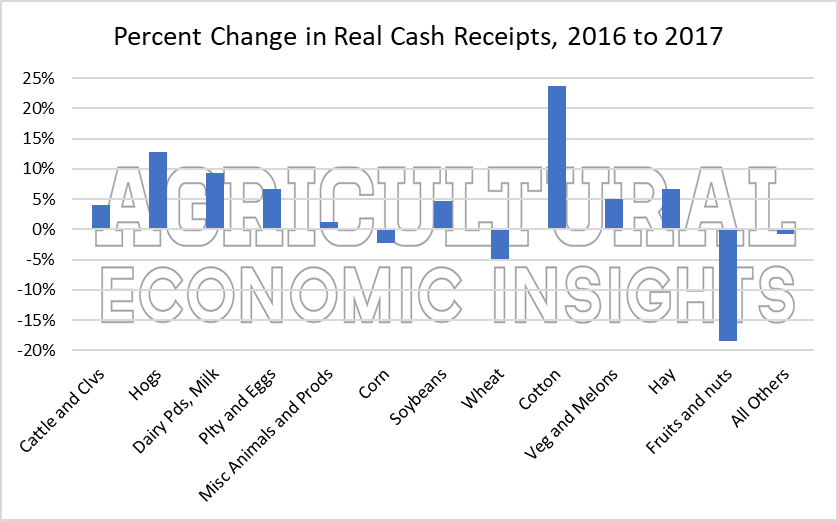 The percent changes in 2017 are based on real prices so the impact of general inflation has been removed. In aggregate, real cash commodity receipts increased by 2.3% in 2017.  Of the 13 commodity groupings shown, all but 4 showed increased cash receipts in 2017 versus 2016.  Most of these increases were rather small.  The most notable improvements were seen in the livestock sector.  In particular, hogs saw an increase of 13% and dairy and poultry both saw increases over 5%.

On the crop side, the results were slightly more mixed.  Here, cotton receipts increased by 24% and soybeans, vegetables and melons, and hay all saw increases of at least 5%.  Fruits and nut receipts were down significantly, with corn and wheat receipts also declining.

When looking at cash receipts it is important to remember that changes can occur due to price changes as well as quantity changes.  Quantities can be driven by changes in production area as well as yield per planted area.  For instance, cotton plantings increased significantly this year and helped push up cotton cash receipts.   The ERS reports that 90% of the overall increase in nominal cash receipts was driven by increases in the quantity of production.  This was particularly true in crop production where the quantity impact added $6.9 billion in aggregate.  The ERS discussion can be found here.

Still Way Down from the Highs

Although 2017 was slightly better for most commodities, cash receipts continue to fall well short of the highs achieved in during the last 7 years.  Figure 2 shows the percentage change from 2017 to the high of the period 2010-2017. Again, the values in Figure 2 are calculated on real (inflation-adjusted) cash receipts.

For many crop sectors, the highs occurred in 2012 or 2013.  Livestock groups tended to see their highs 2014.  None of the commodity groups shown have achieved cash receipts equal to their highs of this 8-year period.  Most continue to be well off those highs.  The largest declines continue to be in the crop sectors.  Cash receipts for corn are down 41% from their 2012 high.

Wheat has fared the worst, remaining 52% below its peak.  Soybeans have fared better remaining 15% below their peak.  As we mentioned earlier, some of this impact is due to changes in plantings and yields and some due to prices.  Wheat acres have fallen along with plantings.  On the other hand, soybean acres have increased, and yields have been strong. 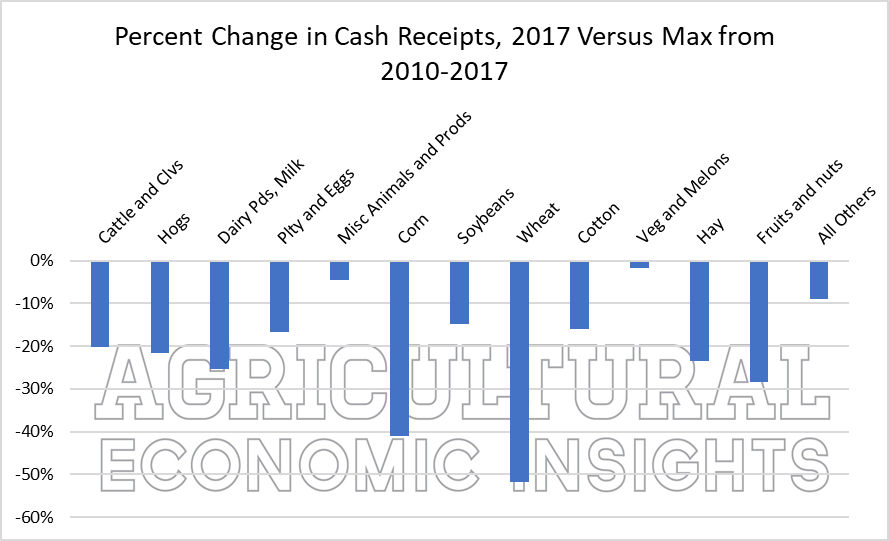 Down from Average as Well

A comparison to the highest cash receipts in the last 8 years was nearly guaranteed to paint an ugly picture of cash receipts.  After all, the recent peak was very high in the context of history.  We also compared 2017 cash receipts to the average of 2010-2017.  These changes are shown in Figure 3.

In this case the result is slightly more encouraging.  In 2017, a few of the commodity groups actually showed slight increases relative to the average.  The biggest declines from average were seen in corn (-21%), wheat (-32%), and fruits and nuts (-17%).  We have talked about the declining fortunes on wheat in detail in previous posts, so there really isn’t much left to say other than wheat continues to lose market share and experience poor economics.

Of the crops considered, corn has shown the second largest decline from average, remaining 21% below average. This is very important for the crop sector because, even with declining cash receipts, corn has the largest cash receipts of any crop commodity in the U.S.  Its struggles continue to impact the crop sector and appear likely to do so for some time. 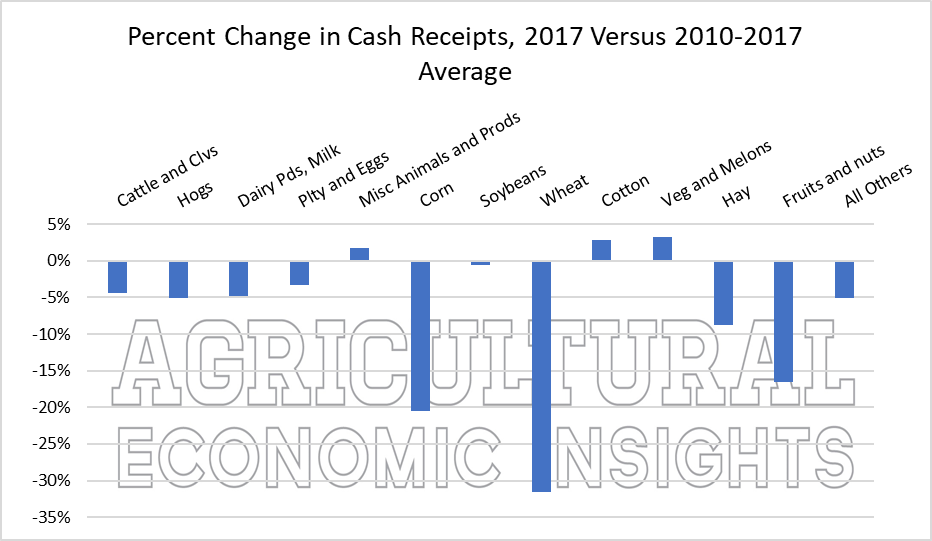 While the 2017 picture appears somewhat better than 2016, cash receipts remain substantially down from recent highs in every commodity group.  Every crop and livestock group considered finds 2017 cash receipts lower than the best times seen in the last 8 years.  When compared to their averages, livestock groups are currently faring better most of the crop sectors.  The largest loser continues to be wheat, but corn’s struggles are also apparent.

The agricultural economy will continue to undergo changes because of depressed cash receipts.  There have been some production shifts among commodity groups based on relative prices.  This adjustment is relatively easy to make in the crop sectors.  For example, producers have made a major shift away from wheat.  In livestock, such changes are less practical.  Even in crops, such changes only provide modest relief.  With all commodities in a downturn, there are few places left to turn.  As a result, there will continue to be intense economic pressure costs in the overall sector and it seems unlikely to abate anytime soon.