How Good? A Look at Recent Corn & Soybean Yields

The story for U.S. crop producers has been low commodity prices, tight budget margins, and falling net farm income. Big yields – especially for the U.S. corn and soybean crops- have been a significant contributor to sluggish outlook. After four consecutive years of above-trend corn and soybean yields, the commodity market outlook has started to feel like a broken record. This week’s post reviews recent yield trends for U.S. corn, soybeans, and wheat to provide some perspective.

Given the upward trend in yields over time, meaningfully comparing yields over several years can be difficult. However, historic yields can often provide an important perspective. To navigate this, reported national average yields from 1960 to 2017 were de-trended to allow for a meaningful comparison to current (2017) yields. Annual national average yields for corn, soybeans, and wheat were considered.

Figure 1 shows the annual departure from trend-average corn yields. In other words, this tells us how far above (or below) the long-run trend average a given year was. As noted earlier, corn yields have been above-trend since 2014. While four consecutive years of yields above-trends might seems unlikely, it is not completely uncommon. Yields were above trend from 2003 to 2009, or seven years in a row.

A second way of considering yields over time is with moving averages. Figure 2 shows the 3-year and 5-year average of corn yield departures from trend (or the moving averages of the data shown in figure 1). At the end of 2017, for example, the 3-year average departure from trend was +8 bushel; the 5-year average departure was +6 bushel per acre. This measure is helpful and important as it provides a way of considering yields over a span of a few years. In both cases, moving-average yields in 2017 were among the highest observed since the 1960s and, more specifically, were the second highest observation. This tells us that, since 1960, only one other three-year period had an average trend-adjusted yield higher than the current average (2015-2017). The same is true for a 5-year average. 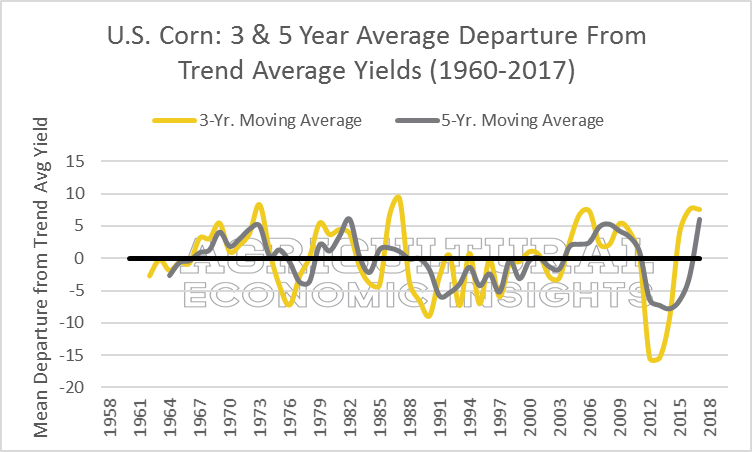 Similar to corn, soybean yields have also been strong since 2014. Consecutive years with above-trend yields have historically occurred with soybeans (Figure 3). Most notable were the six years from 1968 to 1972.

Recent yields have been among some of largest deviations from trend. For example, soybean yields have historically exceeded 2-bushel above-trend nine times since 1960; four of those years were 2014, 2015, 2016, and 2017. 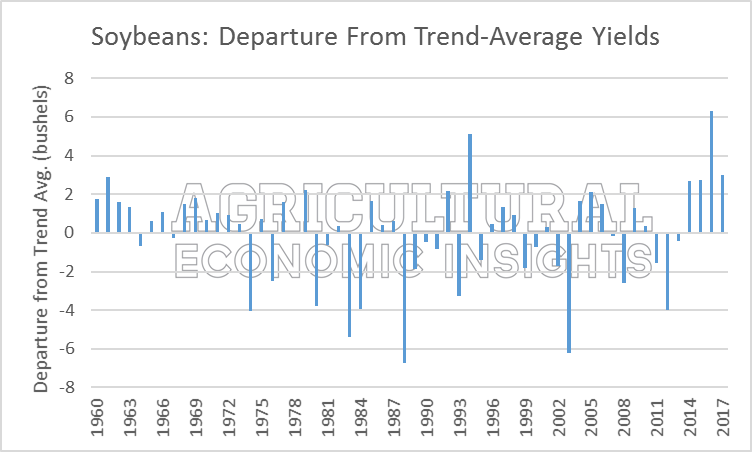 Considering the large departures from trend-average since 2014, it is not surprising that the 3-year and 5-year moving averages are well above previous observations (figure 4). What is surprising is that soybean yields are nearly double the prior moving average highs. For example, the 3-year moving average reached a high of 2-bushel above-trend twice since 1960. Currently, however, the average is 4-bushel above-trend. Since 1960, there has been no other three or five-year span with average U.S. soybean yields as high as what has been observed most recently. 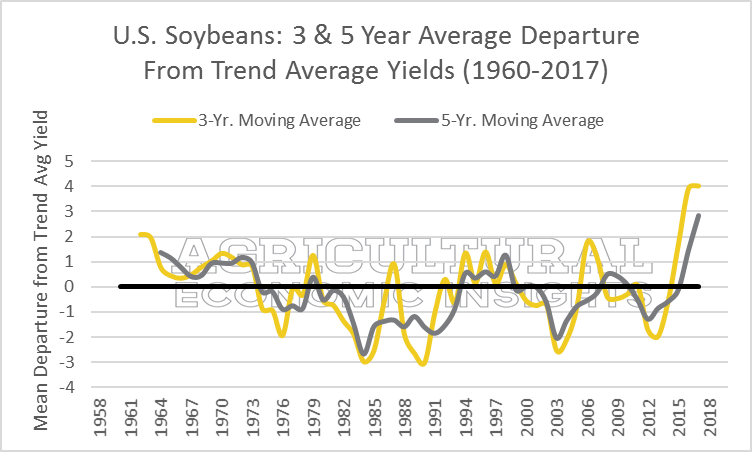 The situation is a bit different for wheat, which has not observed a multi-year run of above-trend yields in recent years (figure 5). Most notable, wheat set historically high yields in 2016 at 6 bushels above-trend. Otherwise, U.S. average wheat yields have been below-trend three out of the last four years. Historically, wheat was above-trend for seven consecutive years from 1979 to 1985. 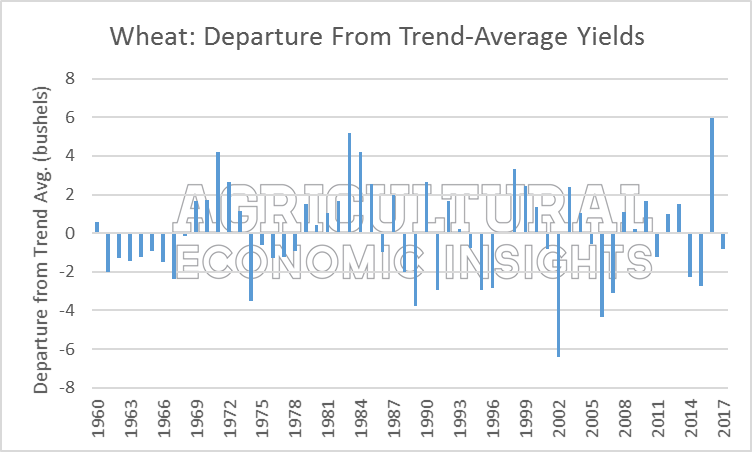 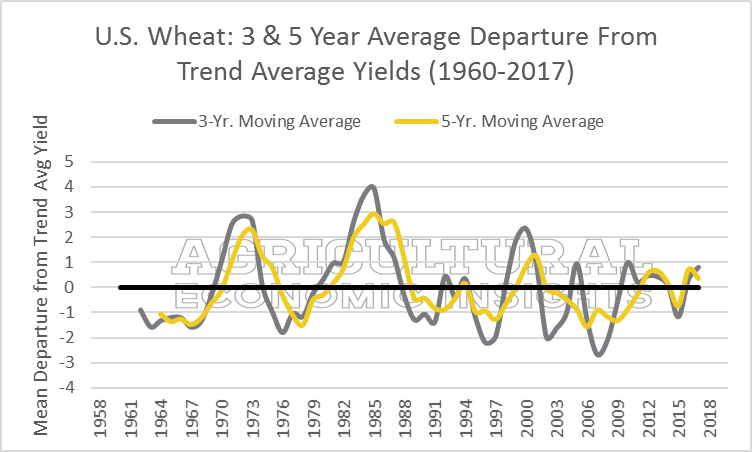 While farmers often hope their farm will raise big yields year in and year out, four consecutive years of above-trend corn and soybean yields at the national level have created challenges. In addition to four years with above-trend yields, recent yields have been historically strong. In 57 years of data, no three-year period has averaged a stronger national soybean yields than 2015-2017. The same is true for a five-year average and 2013-2017.

While not a record, corn yields have also been strong. The most recent three years have been the second-highest three-year span for average national corn yields.

It is easy to overlook how big soybean yields have been in recent years. From 2015-2017, soybeans averaged 8.7% above trend. This is considerably higher than the 4.6% above-trend corn averaged for the same period.

On the other hand, the story has been much different for U.S. wheat yields. While U.S wheat yields reached a single-year high in 2016, yields in recent years above frequently been below-trend.

In upcoming posts, we will dig deeper into the implications of recent strong yields and provide insights into what one should consider for 2018.