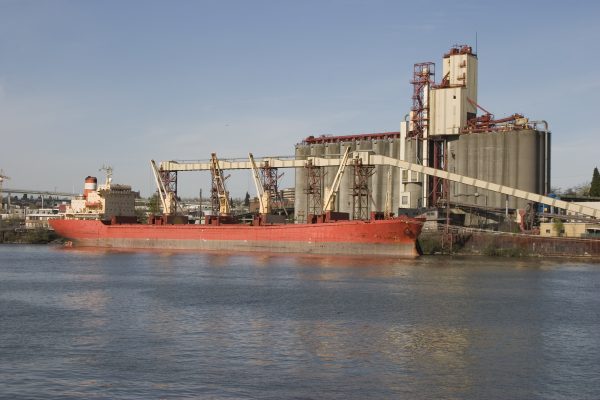 U.S. trade policy has jumped to the front of everyone’s mind in recent years. From Brexit to TPP and NAFTA, trade policy has been in the global spotlight. The scrutiny has created a lot of uncertainty and unease. Most recently, the White House has floated the idea of imposing steel and aluminum tariff on imports bound for the U.S. The ripple effects of such a policy decision have unpredictable and unforeseeable implications, but concerns of a trade war, especially with China, are not unwarranted.

In light of the increasing uncertainty surrounding trade policy, this week’s post is a quick review of U.S. agricultural exports.

Figure 1 shows the value of all U.S. agricultural exports from 1967 to 2017. These data are inflation-adjusted to 2017 dollars (real dollars). In recent years, corresponding with the boom in farm incomes, a sharp uptick in the value of ag exports began around 2005. Throughout most of the 1990s and early 2000s, the value agricultural exports were around $70 billion. This jump sent exports to $156 billion by 2014, and is currently at $138 billion. 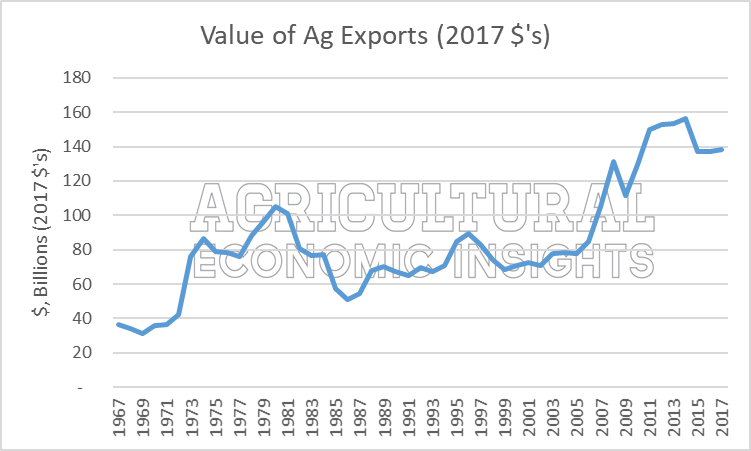 It’s also important to recognize the types of agricultural products the U.S. exports has shifted over time. In the 1970s, a majority (70% or more) of the value of ag exports where bulk exports – shipments of commodity wheat, corn, soybeans, etc. (figure 2). More recently, exports of consumer-oriented ag products have grown significantly. These products- such as meats, dairy products, fruits, nuts, and prepared foods- accounted for 47% of the value of exports in 2017, while bulk exports accounted for half its share in the 1970s (today, 35%) 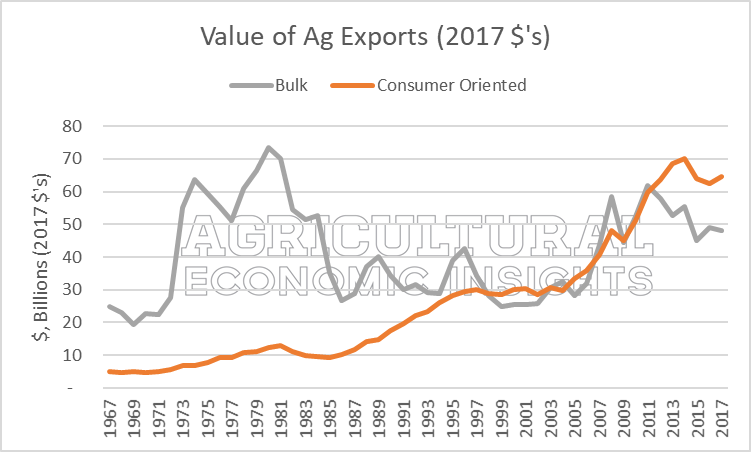 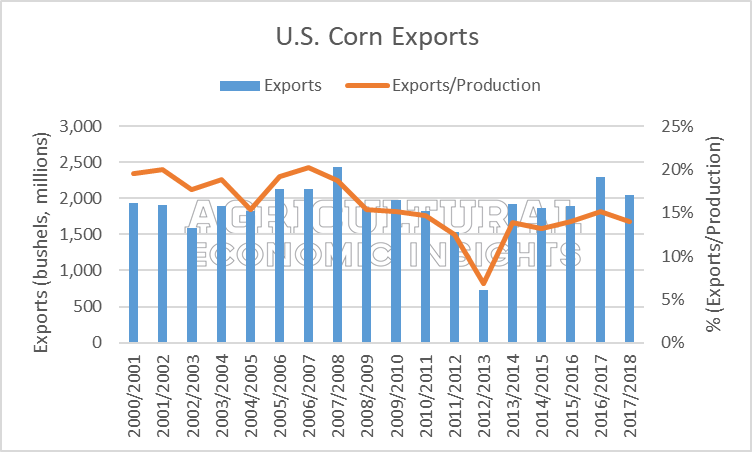 A common theme for agricultural exports is how significant the largest trade partners are. For corn, the 3rd, 4th, and 5th largest buyers collectively account for 23% of all exports, which is still less than Mexico and Japan individually. Collectively, the top-5 account for 74% of all U.S. corn exports. 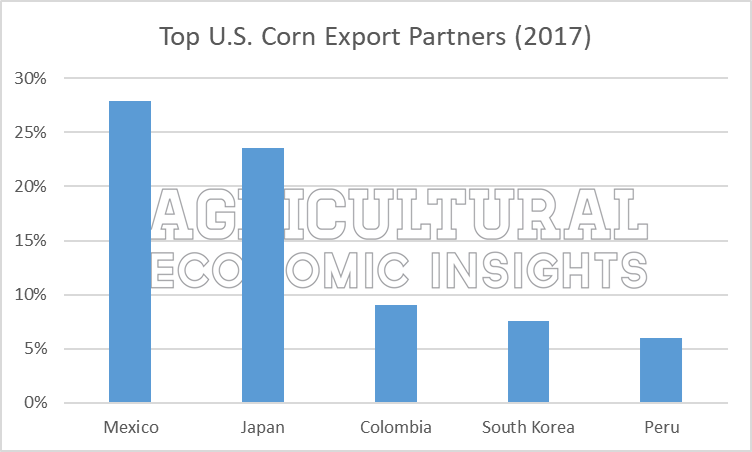 A much different story has emerged for soybeans. Soybean exports have doubled in recent years, up from 1 billion bushels in the early 2000’s to more than 2 billion bushels in 2016 (Figure 5). The share of soybeans exported has increased from 35% to 51% in 2016/2017. For the current marketing year, soybean exports are expected to be 48% of production. 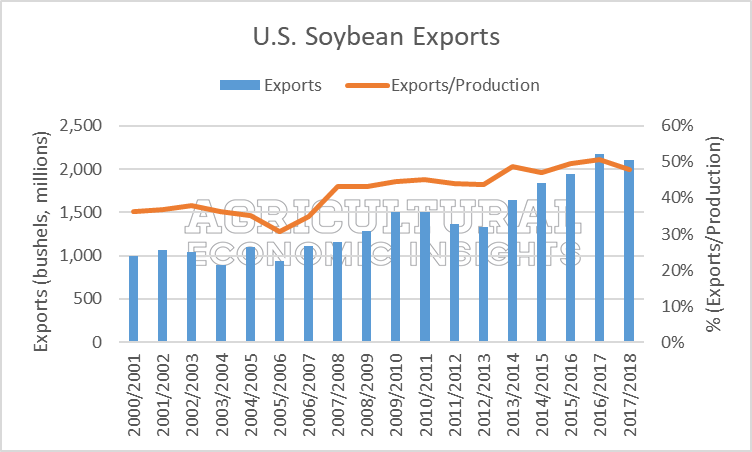 Collectively, the top-5 account for 78% of all U.S. soybean exports. The concentration of soybean exports to China possess a serious potential risk in a trade-war scenario. 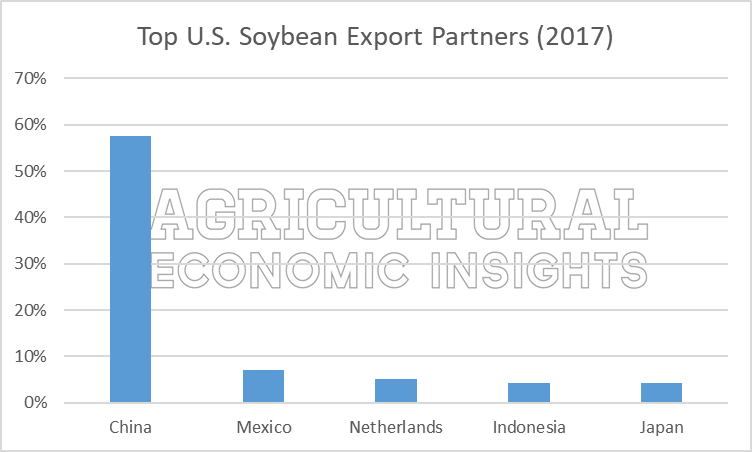 Since the 2000’s the U.S. has exported around 1 billion bushels of wheat annually. This ebbs and flows, but has mostly trended around the 1 billion bushel mark. U.S. wheat exports in 2017/2018 are expected to be 55% of total production. 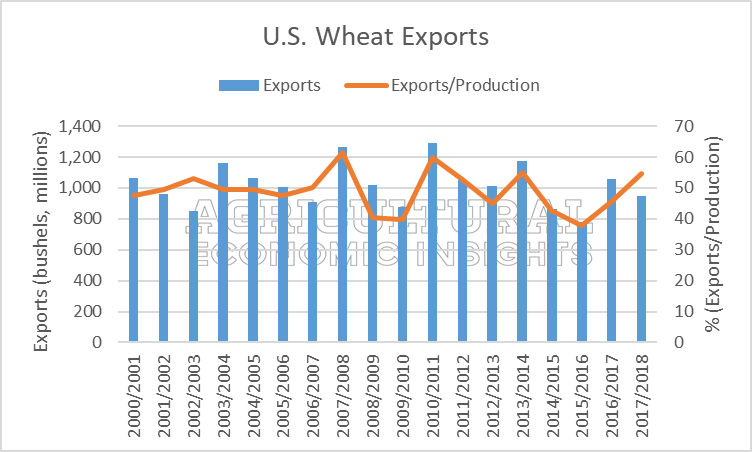 The top destination for wheat exports is Mexico, which accounts for 14% of total U.S. exports. Japan, the Philippines, Nigeria, and South Korea are also top buyers.

Collectively, the top-5 account for 46% of all U.S. wheat exports. Overall, wheat has a much more diverse export market, compared to corn and soybeans. 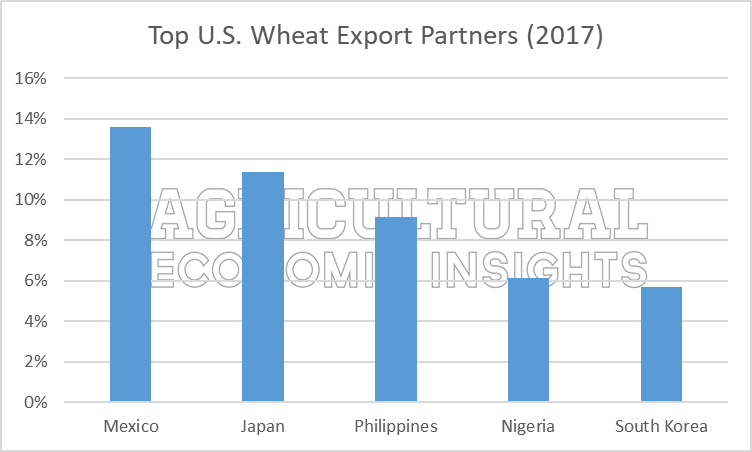 Given the uncertainties around NAFTA (which is the free trade agreement between the U.S., Canada, and Mexico) the possibility of tougher trade relations with China (the talk of steel and aluminum tariffs) this chart captures the risk agriculture may face in the event of a trade war.

There are two key takeaways from figure 9. First, Canada, China, and Mexico are significant buyers of U.S. agricultural exports. A souring of trade relations with these countries would be a risk for agricultural producers.

One more note on China; in 2017 soybeans accounted for 63% of China’s purchases of U.S. ag products. 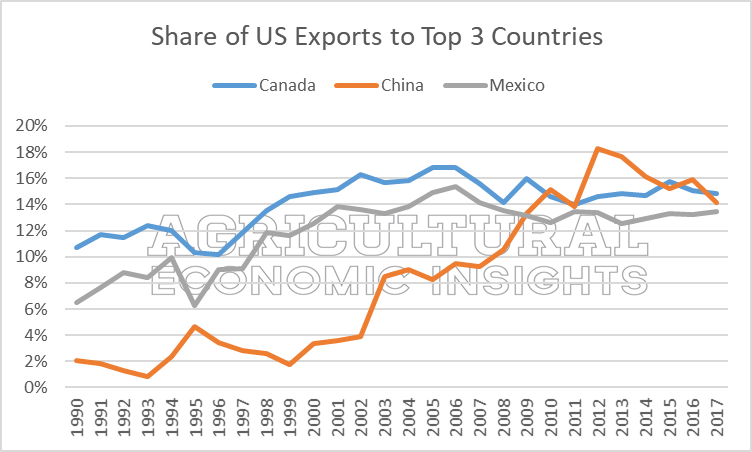 Agricultural exports are an important and growing driver of the U.S. agricultural economy. While ag exports are typically talked about in broad terms, it’s important to remember 1) exports account for a different share of production for each crop 2) the size of and concentration of trade partners varies and 3) the impact of trade with Canada, China, and Mexico today – and since the 1990s- is significant.

Unraveling the impacts of a trade war are not simple (here) and even without a full-blown trade war, the proposed tariffs could be enough to make the macro-outlook unfavorable for agriculture (here). With that in mind, it’s important to remember a 10% decrease in exports would have different impacts on ending stocks and stock/use ratios. Soybeans, which relies heavily on exports and has relatively low ending stocks, would face significant headwinds from a drop in exports.  All in all, increasing trade – not disrupting it- would be better for the health of the U.S. agricultural economy.

In January 2017 we outlined a list of challenges producers might face in the upcoming year. The final comments that Brent and I shared for that post seem just as relevant today:

“In our opinion, the macro-economy and government policy are set up to play a much larger role in the agricultural economy in 2017 (and beyond). Many unknowns exist. While many are optimistic about the future, it’s important to note that many of the unknowns and moving pieces can play out in unpredictable ways. More directly, given the macro-economy and government policy unknowns, it is extremely difficult to understand how the impacts might affect agriculture. Furthermore, it’s extremely difficult to conclude – at this point- that these to-be-determined factors will be unequivocally positive for the U.S agriculture.”