USDA Corn and Soybean 2018 Cost of Production: Hope for Profits?

Commodity prices and farm incomes began to fall in 2014.  Since that time real net farm income has fallen a little over 50%.  As commodity prices fell, producers have found it imperative to reduce the cost of production.  This has been particularly true for corn, soybean, and wheat producers.

The recent USDA projected 2018 costs of production for corn, soybeans, and wheat indicate that they expect the cost of producing these commodities to continue to fall in 2018.  While they still project economic losses in 2018, the costs of production have fallen to a point that leaves hope for a return to economic profitability in 2018.

Shown in Figure 1 is the forecast total costs of production for corn ($645/acre), soybeans ($461/acre), and wheat ($306/acre).  As one would expect, corn has the highest per acre cost.  The most important thing to note about these costs is that they have all declined from those projected at this time in 2017 with corn dropping $25 per acre, soybeans $12 per acre, and wheat a meager $1 per acre.  On their face, these declines seem rather modest, but it is important to remember that these declines come on the back of previous declines.

The differences in the amounts of variable costs associated with each of these crops can be seen in the graphic. For instance, corn requires significantly more investment in seed and fertilizer than the other crops.  This is one reason that farmers that are tight on cash flow may consider switching from corn to soybeans. This is particularly true when the expected net income for each crop is similar. 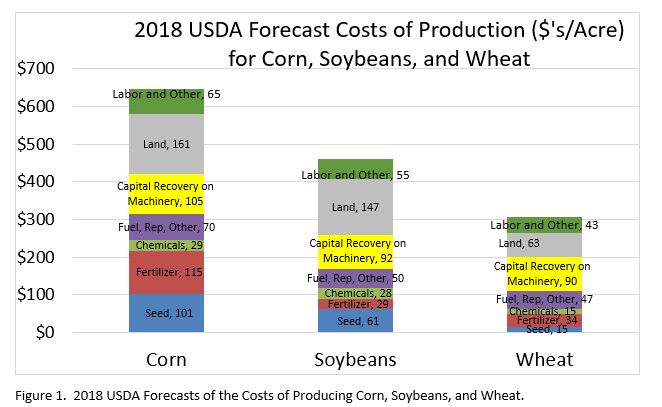 We have combined the USDA cost projections data with USDA forecasts of yields and the average farm prices to arrive at a summary of the projected profitability of each crop.  These estimates are for the average conditions in the U.S., so would vary considerably by region and specific practice.  Still, the estimates provide some useful information about the profitability of these crops.

Table 1 summarizes some of the key statistics for corn, soybeans, and wheat.   At these values, soybeans have the highest contribution margin and smallest loss per acre.  Corn is expected to generate a loss of $53 per acre and wheat a loss of $82 per acre.

Perhaps the most important numbers in this table, the cost per bushel, can be found in the second row of the table.  These values provide some reason for optimism in the case of corn and soybeans.  For both of these crops, relatively modest price improvement would result in a return to economic profitability. This is different than previous years.  Last year, the cost of corn production was $0.42 above the midpoint of USDA’s farm price projection.

Despite a definite improvement over last year, wheat still presents a very challenging economic situation with costs $1.77 above the price estimate.  Last year the difference was $2.23.  While one could see corn or soybean prices increasing enough to cover costs, it would take a major move in wheat prices to restore economic profitability.

On balance, the 2018 cost projections indicate that farmers should again expect tough times.   However, the projections offer a much better chance for profitability than has been seen for some time.  Unlike previous years, it is easier to see a chance for a combination of prices and yields that would result in economic profitability for corn and soybeans.  In our eyes, this is a big improvement over previous years, but we must admit that commodity price deterioration could quickly make things ugly again.  For wheat, it appears that there is still substantial work remaining to return to profitability.