2018 Acreage: Why A Large Uptick in Soybean Acreage Will be Difficult 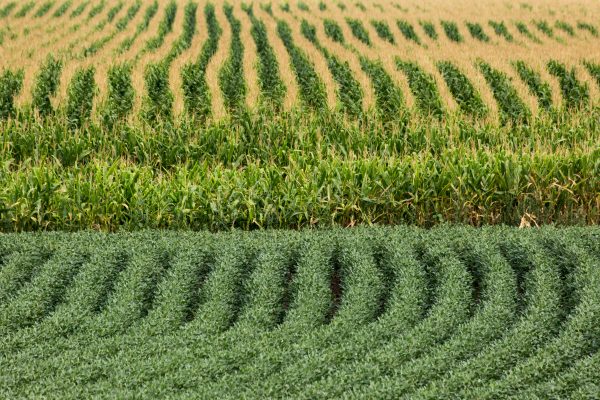 Each March the acreage debate takes the agricultural center stage, and this year is no different. What makes the 2018 acreage debate notable is the very real possibility the U.S. may plant more soybeans than corn. Feeding the speculation is that it nearly happened in 2017 and an early 2018 USDA report forecast that soybeans would eventually overtake corn acres. Finally, the crop insurance discovery price for 2018 again favors soybeans.

Later this week the USDA will release the results of the 2018 planting intention survey. This report is significant as it will set the pace for commodity markets into the spring. With all this said, this week’s post outlines the key factors underlying the allocation of acres in 2018 and why a large soybean acreage increase will be difficult.

In February each year, the crop insurance price discovery period for corn and soybeans takes place. These prices, and specifically the price relationship, provides insights into which crop has a relative advantage. For 2018, the crop insurance price for corn is $3.96 per bushel and $10.19 for soybeans. This puts the price relationship – the soybean/corn price ratio- at 2.57. For context, the current price ratio is basically the same as 2017; (2.573 in 2017 versus 2.566 in 2018).

In figure 1, the soybean/corn price ratio over several years is shown. The price relationship from the Purdue Crop budgets is shown in yellow, while the crop insurance price relationship is shown in blue. In both cases, the 2018 ratio is at historically high levels, signaling that soybean prices are high relative to corn. While among some of the highest observations, it’s important to note 2018-levels are not significantly above historic observations. 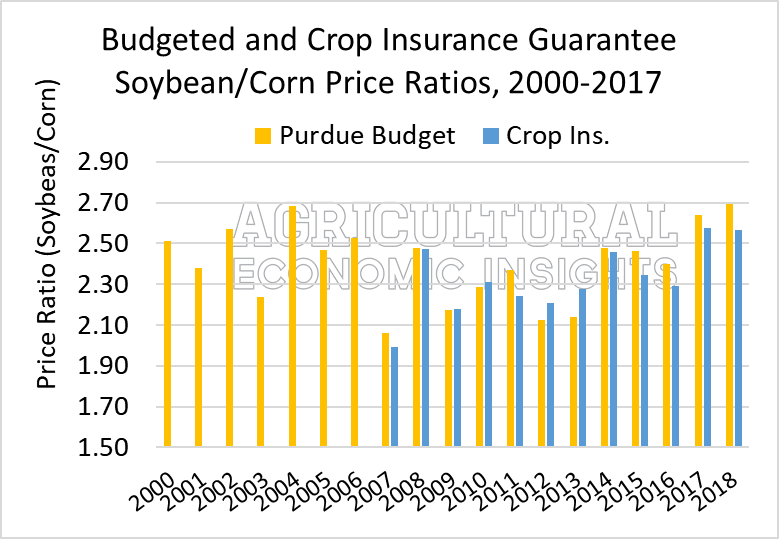 Perhaps one of most overlooked elements of the acreage debate in recent years has been the increase in total corn and soybean acres. This is shown in blue in figure 2. In 2017, combined acres reached a higher of 180 million acres. In 2008 combined corn and soybean acres reached a then-high of 162 million acres. This has been a significant increase in recent years!

So what does 2018 have in store? In a post last fall we noted that wheat would be key in setting the stage for 2018. Another big decline in wheat acres- which has been the case in recent years- would spill-over into more corn/soybean acres. The USDA’s Winter Wheat report – released in early January – indicated winter wheat acres are mostly unchanged from 2016/2017. For comparison, winter wheat acres were down 3.5 million acres in 2016/2017 (compared to 2015/2016). This is to say there does not appear to be a large “push” in total corn and soybean acres – at least so far.

Outside of winter wheat, cotton acres and spring wheat acres could be a source of adjustments.

If soybean acres were to exceed corn acres – or soybeans share of combined acres exceeds 50%- it would not be the first time. In 1983, the U.S. planted 60 million acres of corn and 64 million acres of soybeans (51.4%). However, this record probably needs an asterisk. 1983 was a bleak point in the Farm Financial Crisis and, as we pointed out in an earlier post, government intervention to reduce planted acreage reached a high that year. This is to say that soybeans have only exceeded corn once in history, and it came at the peak of the government’s attempts to limits acres in production during a Farm Financial Crisis. 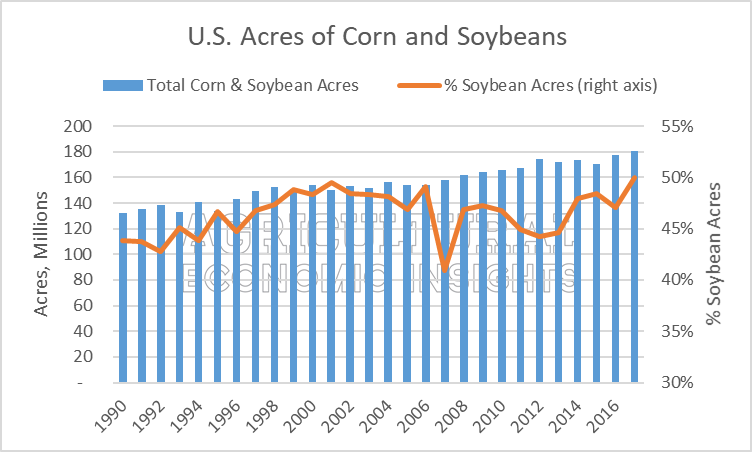 In our opinion, a large shift in combined corn and soybean acres seems unlikely at this point. This is mostly based on the USDA’s January Winter Wheat reports. 180 million acres seems to be a good starting point for combined acreage, with adjustments made for cotton and spring wheat acreage (along with other small grain crops).

Second, one must consider what soybeans share of combined acres comes to. Will this exceed 50% in 2018?

The acreage debate is well underway for 2018. Many wonder if a large upswing in soybeans is likely. If so, it could result in the U.S. planting more acres of soybeans than corn.

For a large increase in soybean acres to take place in 2018, it would require an increase in both combined corn/soybean acres AND soybeans share of combined acres. We are not saying this isn’t possible, but we are, however, suggesting this might be a taller order than some presume.

Regardless of what happens in 2018, it’s impressive to reflect on the increase in combined corn/soybean acres and how strong soybeans’ share of combined acres has been in recent years. It’s doubtful that 10 years ago – when the U.S. first planted 160 million acres of combined corn/soybean acres- that many would have expected 90 million of both corn and soybeans in 2017. With that said, the next 10 years could be equally interesting.

One final note, the USDA’s planting intention report – due out later this week- is the first look at what producers are planning. A lot can happen between when this survey was fielded and when the crop is planted. In fact, the report itself could create a market response to encourage producers to shift their plans. With that said, we will share the words of someone much wiser than us to summarize this idea: