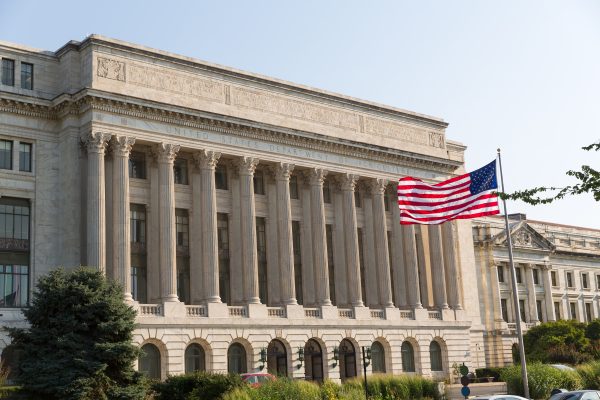 The establishment of the ARC/PLC program in the 2014 farm bill was a relatively major change in the structure of U.S. farm program payment mechanisms.  The ARC-CO program was elected by overwhelming numbers of corn (93% of acres) and soybean (97% of base acres) farmers and was also popular with wheat producers (53% of base acres).  For these producers, the program is a major component of the so-called farm safety net provided by the farm program.  For most producers, the amount of coverage provided by the ARC-CO program has declined since 2014.  We examine the extent of the declines and which commodities have seen the biggest impacts.

When calculating the Olympic averages, the program allows for the substitution of 70% of T yields when county yields are below these levels as well as substituting the “reference price” ($3.70 for corn, $8.40 for soybeans, and $5.50 for wheat) when market year average prices are below these levels.  Payments are triggered when the actual county revenue is below a revenue guarantee of 86% of the benchmark revenue and capped at 10% of the benchmark revenue.

Producers in many regions of the country have now started to see their ARC-CO payments decline as the benchmark price component of the calculation has steadily fallen.  Corn has seen the largest decrease in benchmark prices, declining 25%, from $5.29 per bushel in 2014 to $3.95 for 2017. Soybeans (11% decline) and wheat (7% decline) have seen smaller relative price declines.

On average the county level revenue guarantees have declined for corn, soybeans, and wheat.  Some descriptive statistics on the changes for the three commodities are shown in Table 1.

Given the price declines mentioned earlier, it is not surprising that corn has seen the biggest declines.  On average, the revenue guarantee for corn producers has declined by $105 dollars per acre.  This is a rather large decline.  It means that the county level revenue where payments would start in 2017 is $105 lower in 2017 than it was in 2014.  The average declines in the guarantees for soybeans ($11 per acre) and wheat ($5 per acre) are much smaller than those for corn.

The average change in the revenue guarantees indicates that the overall safety net provided by the ARC-CO program has indeed declined.  Of these commodities, the biggest decline has occurred for corn where it is 16% lower than in 2014.  For soybeans and wheat, the safety net is in the neighborhood of where the program started.

Averages Only Tell Part of the Story

Perhaps the most interesting feature of Table 1 is not the average changes, but the wide variability in the changes in revenue guarantees across counties.   Some counties have actually experienced large increases in revenue guarantees, while others have seen massive declines.  Because the price calculation is the same for each county, these differences are driven entirely by changes in county yields.  Some of the changes are almost unbelievably large.

Consider the case of corn.  One county has seen their revenue guarantee decline by $515 per acre and one experienced an increase of $183 per acre.  That is indeed quite a range.  To be fair, these two extremes are not from traditional Corn Belt counties and are “extreme” observations.  So we decided to just look at the changes within Iowa.

Figure 1 shows the national distribution of changes in the revenue guarantees for each crop.  Note that the axes have been shortened to include only observations between -$350 and $150 per acre.  One can see from this graphic that for corn 91% of the counties have seen guarantees decline.  In soybeans and wheat, the story is a little better with “only” 64% and 59% respectively experiencing declines. 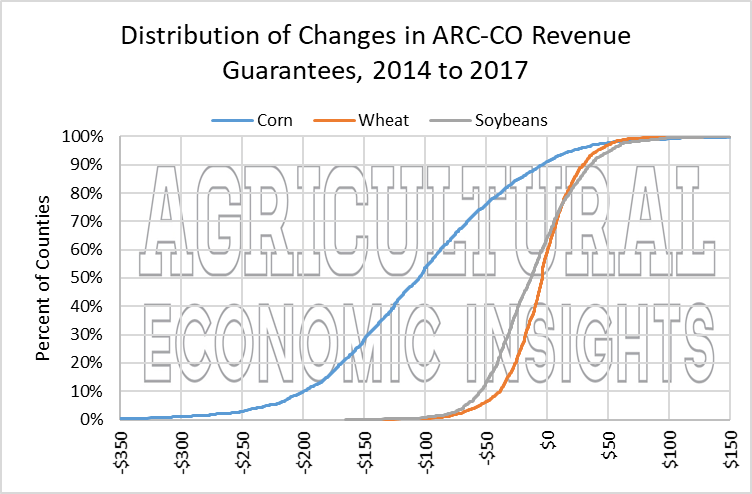 The ARC-CO program is an important part farm income safety net for corn, soybean, and wheat farmers.  Given the commodity price declines and the structure of the program, it is not surprising that the amount of coverage provided has declined for most producers.  The declines have unquestionably impacted corn the most.  From 2014 to 2017 the average decline across all counties was $105 per acre, and all but 9% of the counties have seen their revenue guarantees decline.  The average guarantees for other commodities declined as well, but the absolute level of declines has been less dramatic.

ARC-CO is a unique program because it is based on county yields.  The inclusion of county yields means that changes the yield component of the payment calculations will vary from county to county.  As yields can vary substantially from county to county, the changes in the benchmark yields (and thus revenues) will also vary substantially across counties.  This is clearly seen in the distribution of changes across counties.  One must wonder how much of this county variability is driven by yield estimation sampling error and how much by actual differences in conditions across the counties.  Further, one must wonder how desirable it is to include such unavoidable errors in a payment mechanism.

The Economic Research Service is currently estimating that ARC-CO payments received in 2018 will decline by 31% from 2017.  As economic conditions have worsened the amount of coverage provided by the ARC-CO program has shrunk and will likely continue to do so, although at a declining rate.  Ironically, the payments provided by the ARC-CO program will likely continue to shrink unless 1) things get a lot worse thereby triggering payments at the reduced guarantees, or 2) if revenues increase and guarantees again climb to levels that a setback of the current magnitude would trigger payments at some point in the future.