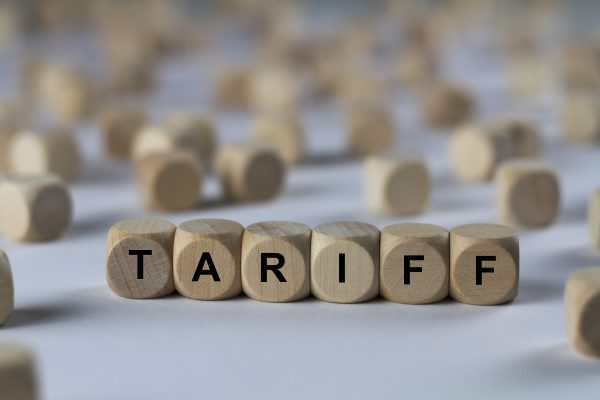 With the drumbeats of a trade war growing louder, the uncertainties facing agriculture seem to grow daily. Given this rapidly evolving situation, we thought it would be helpful to review what exactly tariffs are, how they work, and what it might mean for U.S. agriculture.

A tariff is a tax placed on goods traded with other countries. In the context of the current trade environment, tariffs have been levied on an imported good. For example, the U.S. has placed tariffs on steel and aluminum imports. This tariff tax would be paid, by the one importing the good, to the local government.

Beyond tariffs, other means for enacting trade barriers exist. In the 1970s, the U.S. issued an embargo – or ban- on soybean exports. Countries can also issue a quota or set a maximum limit on the quantity of a good that can be imported. Another tool that could be deployed is a tariff-quota. This a tariff that goes into effect after a quota threshold is exceeded. In short, there are several means to discourage the inflow – or outflow- of traded goods. To date, the focus has been on tariffs, but quotas have also been discussed.

Brent summed up the supply-side implications of a tariff quite concisely: “Tariffs from one country encourage production in other parts of the world.” The White House has stated steel, and aluminum tariffs are needed to protect – for reasons of national security- the U.S. steel and aluminum industry. The goal of the 25% tax on steel and 10% tax on aluminum would be to raise the prices U.S. manufacturers can receive for their good and encourage production in the U.S.

The 25% tariff China has proposed on U.S. soybeans would be a steep tax on soybeans imported from the U.S. and, in turn, discourage Chinese buyers of soybeans from buying U.S. soybeans. Looking for soybeans cheaper than the tariff-burdened U.S. soybeans, Chinese buyers would turn to other trade partners to fill their orders. In some cases, they may “outbid” other countries for South American soybeans.  Another country, say Spain, would then turn to the U.S. suppliers without facing the tariff. In the long run, however, this “outbidding” activity this would encourage soybean production in other parts of the world, particularly South America and China itself.

The often overlooked impact of trade barriers – be it tariffs, quotas, tariff quotas, or embargoes – are the price effects borne by consumers. Any trade barrier enacted will increase the price of that good. All else the same, the higher prices will result in a decrease in the quantity of the good demanded.

Ultimately, the impact on quantity demanded depends on two factors. First, how large is the price impact? If China can limit the number of tariff-bearing U.S. soybeans it has to buy, the net impact price effect will be smaller. Beyond the tariff itself, China could face premiums to buy South American soybeans or additional transportation costs for soybeans sourced from less-feasible locations.

The second factor is how sensitive users are to price changes. This is the elasticity of demand, or the slope of the demand curve. For goods that are inelastic – food is often cited as being inelastic – the quantity impacts can be quite small. For extremely price sensitive products, the change in quantity demanded can be very large.

But What’s the Impact?

Colleagues at Purdue University recently completed a study for the U.S. Soybean Export Council. In this, they considered a few scenarios in which China imposed tariffs on U.S. soybeans. This work discussed the possible impacts on U.S. and global agriculture. It is important to note their method, which included the use of a general-equilibrium model, measures conditions after-the-dust has settled. This is to say the model does not provide insights into how the commodity markets might respond over the next few months. Rather, the model attempts to understand what the average prices farmers receive might be in a few years after global production and demand have had a chance to respond. Second, this model considers the impact of changing prices from both production and supply responses.

The modeled impacts from a 30% tariff  – slightly higher than the proposed 25% tariff – would be:

Additionally, the following are worth sharing:

-Trade Impacts: Total U.S. soybean exports fall in all scenarios considered.
-Trade Impacts: Global soybean imports decrease -by a small percentage- in all scenarios considered.
-Price Impacts: “restriction on China’s import from the US drops the price of soybeans across the world, except in China. This causes an increase in consumption of soybean across the world, again except for China.”

Perhaps the most obvious point is that the impacts on trade are substantial and far-reaching. In many cases, the indirect impacts are just as important – if not more than- the direct impacts. That being said, the consistent results of 1) a decline in U.S. soybean exports and 2) a reduction in global soybean imports are perhaps the most important big-picture results to keep in mind.  Of course in the short-term, other things can happen, but over the long-term, the tariffs are detrimental to both U.S. farmers and soybean users in China.

What to Watch For

Those with a more optimistic outlook will place this probability rather low, while those with significant concerns will place the probability very high. Ultimately, this will be a key metric to monitor and consider as conditions in the farm economy unfold over the next few years.

The bottom line of any trade analysis is that the impact of tariffs, or any other trade barrier for that matter, is to decrease the incentives to trade.  The U.S. agricultural sector depends heavily on international trade, and increases in barriers to trade are discouraging. From the perspective of the U.S. agricultural sector trying to work its way out of a protracted economic slump, the impact is undoubtedly negative.

One of the most positive stories for U.S. agriculture over the last several decades has been Chinese consumption of agricultural products, especially soybeans. In fact, growth in U.S. soybean exports to China was a major contributor to the earlier farm economy boom. Furthermore, continued strong exports help cushion the farm economy slowdown. Moving forward, one has to wonder about this trend over the next few years.

One point that we hope to make very clear is that any tariff – or trade barrier- has an impact on prices and, in turn, has an impact on supply and demand. This point seems to be missing from most of the conversation about the potential impacts. Any analysis, commentary, or twitter-rant that doesn’t consider price effects – or at least acknowledges price effects- is missing the economic trade-offs that producers and buyers of agricultural commodities will face. To put it differently, the impact of a Chinese tariff on U.S. soybeans is far more complicated than a simple redistribution of who is buying/selling soybeans with whom.

Even if the 25% tariff on soybeans become a reality – and then stays in place for several years- it will be important to avoid confusing the impacts of the tariffs with other factors. This is to say that factors outside of the proposed tariff can also have significant impacts on market conditions. For example, soybean prices could fall below $8 per bushel without the tariffs going into effect. Alternatively, a large, multi-year drought could send soybean prices to record levels even with the tariff in place.

Finally, we encourage readers to consider the questions about soybean exports in 2018/2019. Write down forecasts of the probability- or likelihood- of exports falling below 1.86 billion bushels and update this over time. This will be helpful in sorting through the noise and confusion. For producers and ag lenders, a significant decline in exports could dramatically change the soybean market outlook. For retails and ag manufacturers, a significant drop in export could result in a contraction in soybean production – especially in areas that have recently expanded acreage.