Planting Intentions and the Farm Economy: Some Good News? 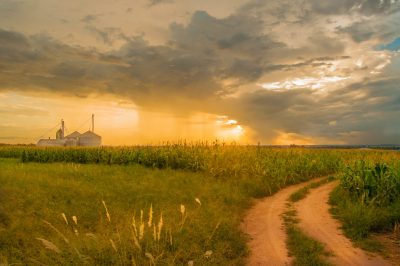 It seems the USDA’s March Planting Intention Report never fails to surprise, and this year was no exception. While many headlines noted planned soybean acreage exceeded corn, the less reported data, in our opinions at least, provided some rare “good news” for the overall farm economy.

This week’s post considers 2018 planting intentions and what it could mean for the farm economy.

The USDA’s March 2018 planting intention report estimated acres at 88 million acres for corn and 89 million for soybeans. After adjusting your eyes to the soybean number being larger than corn (something that has not happened since 1983 when the U.S. government had significant intervention during the Farm Financial Crisis), it’s worth noting that both corn and soybean acres are lower than 2017 plantings.

In our minds, the decline in corn and soybean acreage provides hope of improvement in the farm economy. 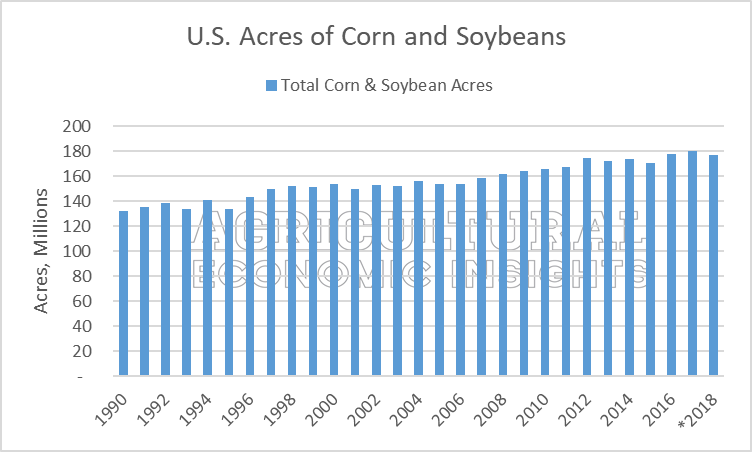 Beyond corn, soybeans, and wheat, one can also consider all acres planted in the U.S. to principal crops[1] (Figure 2). For 2018, the USDA has forecasted principal acres at nearly 318 million acres. This is more than a million acre fewer than in 2017. On the one hand, the 1+ million acre reduction is helpful as it means one-million less acres of production, but, on the other, it is less than a 1% reduction. Principal acres reached more than 326 million in 2014 and, the current 2018 estimate would be the lowest U.S. planting since 2011. We wrote in a post back in 2016 that fewer acres would be an important part of an improved farm economy.

It is important to note that with principal acres, it can be difficult to follow where acres come and go. One source of the earlier increase was cutbacks in the CRP program. Other sources could be cropland transitioning to pasture, or changes in double-cropping of summer-fallow. 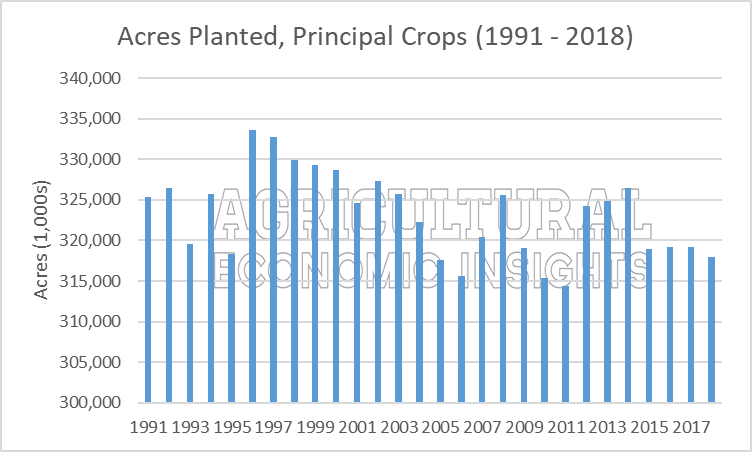 An important question to consider is where acreage goes in the coming years. Where will combined corn and soybean acres be in 2019? Alternatively, 5 years from now. Related to that point: where do wheat acres and total principal acres trend in coming years?

It is worth noting an increase in CRP acres has been proposed in the House’s version of the Farm Bill. If passed, this would have an impact on all these factors. We have previously noted the CRP acres are currently at program lows – nearly 13 million acres below their 2017 highs.

While it is still early in 2018 – and many unknowns exists- the USDA’s planting intention report provides insights that the farm economy may have some support. In our opinion, the expected reduction in corn and soybean acres indicates that the improving economic conditions in other crops – especially wheat- has stopped the upward pressure on corn and soybean acres and production. Of course, trade and weather issues could quickly change this outlook.

In recent years, the upward trend in combined corn and soybean acres has been significant. It is worth considering where acres may head in coming years. In the coming months, the Farm Bill may provide some insights.