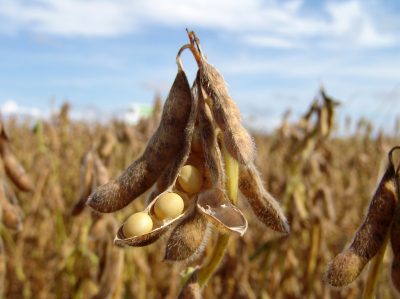 In last week’s post, we reviewed corn yields and what 2018 might have in store. This week’s post is our 2018 soybean yield guide and what to keep in mind as the growing season gets underway.

Figure 1 shows reported U.S. soybean yields from 1960 to 2017. Also included is a linear trend-line of these yields[1]. Over the last 58 years, the national average soybean yields have, on average, increased at an annual rate of 0.43 bushels per acre. While this might seem like a small rate of change, keep in mind this can quickly add up over a decade (4.3 bushels over ten years), or one’s career.

Like corn, soybean yields have been very strong in recent years. This is seen in figure 1 when considering the gap between the trend yield line (the dashed line) and reported yields. Yields since 2014 have been well above the trend line. As we discussed in an earlier post (here), the last three years have been the strongest 3-year average period for soybean yields – relative to trend- since the 1960s. 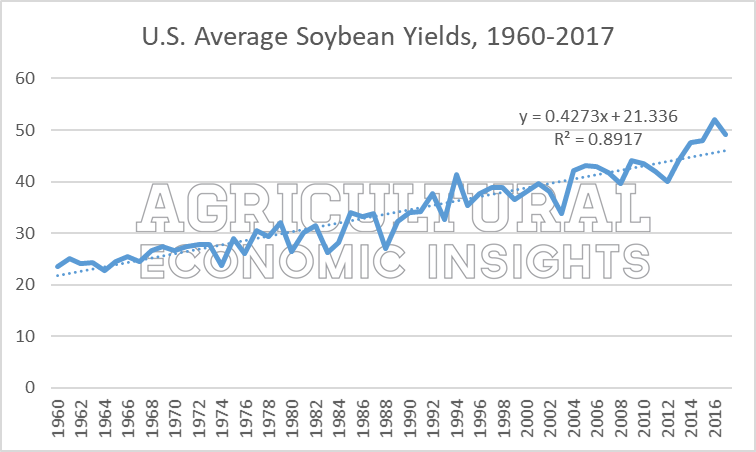 Table 2 ranks the departure from trend data reported in Table 1 (the third column) from smallest to largest. Historically, soybean yields had their worst year in 1988 at 6.7 bushels below trend, and their best year in 2016 at 6.3 bushels above trend.

Four of the six largest departures from trend were recent years: 2014, 2015, 2016, and 2017. Unlike the observations in corn – where current yields were above trend but not record-shattering – recent soybean yields have been among the largest departures from trend. Before 2016’s record-setting departure from trend, the previous record stood at 5.1 bushels (1994). Not only did 2016 set a record, but it was also 24% larger than the previous record.

While the trend yield for 2018 is 46.5 bushels, half of the historical departures from trend have been 0.5 bushels above trend or higher. Furthermore, yields have been above trend 34 out of the last 58 years (59% of the time). Both of these observations are to say above-trend soybean yields occur more frequently than 50% of the time.

While yields have been above trend in recent years, it’s worth noting below trend yields are not likely. Historically speaking, yields have been 2.5 bushels below trend or lower 17% of the time. It is important to keep a long-run perspective in mind when considering yield potentials in 2018, both at the national level and even farm level.

Figure 2 is a graphical representation of this relationship. Specifically, each point shown represents a year. The point’s location along the horizontal axis denotes the soybean yield departure from trend while the vertical axis represents the corn yield departure from trend. Take 1988 for example. In that year, U.S average yields were 7 bushels below trend for soybeans and nearly 30 bushels below trend for corn.

The measured correlation between these data was 0.68; finding a positive and moderately strong relationship. As one would expect, years with favorable conditions for U.S. corn yields are also generally favorable for soybeans, too. 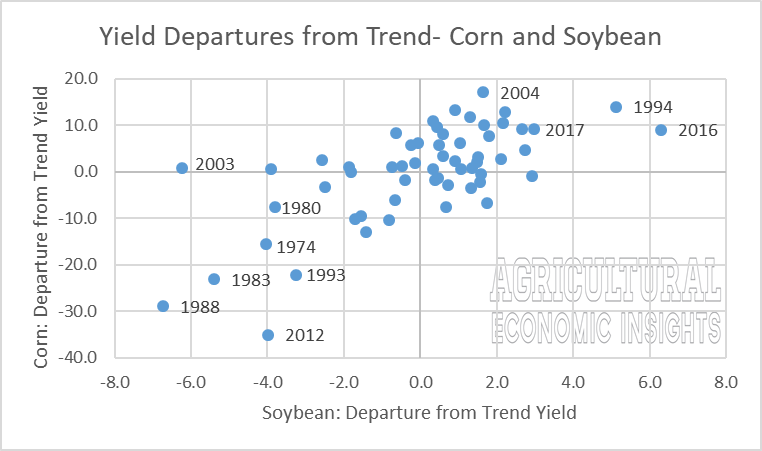 Trend U.S. soybean yield 46.5 bushels per acre for 2018. While this trend yield might seem quite low given recent yields, but it’s important to remember how strong recent yields have been.

When thinking about yields in 2018, we (again) urge caution against assumed below-trend yields are “due.” On the other hand, we also urge caution against only considering recent yields- which have been historically very strong- when setting farm-level yield expectations.

There will be a lot of yield forecasts and estimates made over the next several months. Most of these forecasts will be compared to recent yields (which are historically very strong) or reported yields over time (which ignores the upward trend in yields over time). In both cases, these attempts will fail to consider the yield departures from trend, making it difficult to truly compare how good – or poor- 2018 yields might be.

[1] A linear trend line was used for this post. It is worth noting, however, some propose a non-linear, quadratic trend for soybean yields. See this FarmDocDaily article for more: http://farmdocdaily.illinois.edu/2017/04/shift-in-soybean-acreage-national-yield-2017.html