How Much Damage Did Recent Price Movements Do to Projected Corn and Soybean Returns? 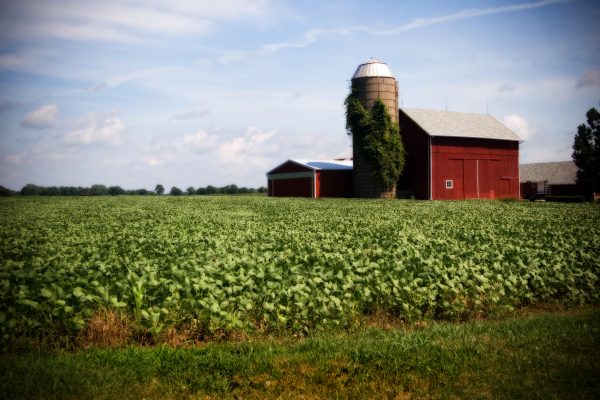 To say that the last few weeks were tough for corn and soybeans producers is a bit of an understatement.  After reaching contract highs toward the end of May, both new crop corn and soybean prices sank toward contract lows during the third week of June 2018.  These price swings resulted in a large shift in the expected corn and soybean returns.

Although crop insurance guarantees for both crops were nearly identical to the previous year, an analysis of those guarantees suggested that for many producers the guarantee would cover variable costs and a good portion of cash rental rates.  The overall economic improvement was thus driven largely by improved cost structure.

To this point, we frequently utilize projected crop budgets to assess the economic situation for grains.  At the start of the projected budgets for both corn and soybeans offered hopes for a return to economic profitability.  Based on USDA’s projected costs and yields, soybeans showed a slight economic loss and corn showed a projected loss of roughly $50 per acre.  Both were substantially better than previous years.  Toward the end of our post we concluded:

“On balance, the 2018 cost projections indicate that farmers should again expect tough times.  However, the projections offer a much better chance for profitability than has been seen for some time.  Unlike previous years, it is easier to see a chance for a combination of prices and yields that would result in economic profitability for corn and soybeans.  In our eyes, this is a big improvement over previous years, but we must admit that commodity price deterioration could quickly make things ugly again.”

Unfortunately, the recent price movements would likely fall into the ugly category.  We compared the March Purdue crop budgets for corn and soybeans and updated the prices to a couple of different points in time.  As a reminder, the Purdue crop budgets look at the expected costs and returns for an Indiana corn and soybean farm growing the crops in rotation.  We are using the budget for a 2,600 acre farm with expected yields of 206 and 63 bushels per acre of corn and soybeans respectively. The March budget utilized the harvest time futures contract price less a cash price basis of $0.25 for corn and $0.35 for soybeans.  It is important to remember that the results are reflective of this budgeted farm.  Different basis levels and yields would produce different results. 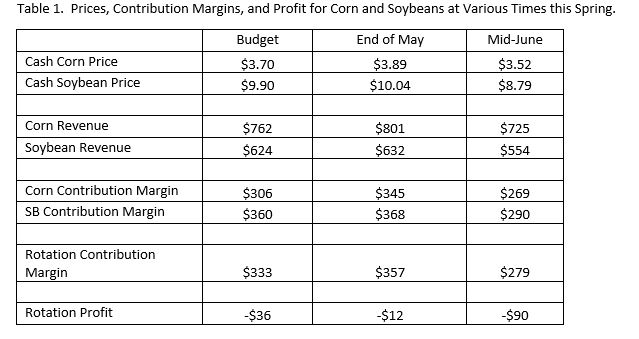 At this point, the costs of growing these crops have not changed significantly from March so we held the cost structure constant across the budgets.  As a result, the changes in the table are due to output price movements.  The selection of exact prices to use is of course somewhat arbitrary.  We made our comparison using the average of the closing price of the contracts during the last week in May and the third week of June.

As one can see a few weeks can make a big difference.  By the middle of May prices of corn and soybeans had increased enough that the rotation profit for the farm showed an economic loss of only $12 per acre.  This was a $24 per acre improvement over March.  Most of the improvement had occurred because of corn price appreciation.  The contribution margin for corn had increased by $36 per acre compared to an increase of $8 per acre for soybeans.

The third column of data shows the results using prices based upon the average of closing prices for the third week of June. The decline in expected profitability from either March or May is substantial.  The total rotation now shows an economic loss of $90 per acre.  This is about 1.5 times the projected loss in March. Only a few weeks prior, the budget numbers showed the potential for a near economic break-even, something that has been elusive in recent years.

While price declines in both commodities are to blame, the decline in the soybean price impacts the budgeted farm the most.  For the cost and yield structure on this farm, the soybean contribution margin is now $70 or 19% lower than in March.  The impact of corn price declines was to reduce the corn contribution margin $37 from March.  In order for corn to return to its March levels requires only a $0.20 improvement.  Soybeans have a little more work to do with an increase of $1.11 required.  This can also be seen in the deterioration of the soybean to corn price ratio.

The recent price swings in the commodity markets have had a substantial impact on the expected profitability of corn and soybean farms.  While the absolute amount of volatility is not exceedingly large compared to a few years ago, the changes have taken expected farm profitability from near break-even to a rather substantial loss.  While the cause of the price swings is undoubtedly multi-faceted, one must recognize improving expectations of yields and global trade uncertainty. Improving yield expectations provide some offsetting income to the farmer, while demand uncertainty due to trading disputes does not.

Compared against the last week in May, rotation profitability has declined by $78 per acre.  To put that number in perspective, for a 2,700 acre farm these numbers are based upon that would amount to a $210,600 swing.  This is a substantial cash flow swing and importance of risk management. Given the losses incurred in previous years, it will be very critical to monitor the situation going forward.  Corn and soybeans quickly lost value and it is certainly a possibility that they could again swing upward improving the budget situation.  However, one must also be wary of future declines that could make the budget situation downright nasty.

Trade Disputes Heat Up, USDA to the…