Trump’s Trade Aid: The Good, The Bad, and the Unknowns 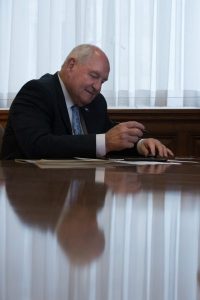 After months of reassurances, the USDA released their plan to protect farmers caught in the Trade War crossfire. Despite all the headlines and attention, we found the plan lacking important details and raised several questions.

To briefly recap, the USDA announced it would, in total, “authorize up to $12 billion in programs.” More specifically, the largest program would be payments to producers of soybeans, sorghum, corn, wheat, cotton, dairy, and hogs. Also, the USDA would purchase surpluses of fruits, nuts, rice, legumes, beef, pork and milk for “distribution to food banks and other nutrition programs.” Finally, the smallest component is funding programs to promote trade. The USDA’s official press release can be found here. This week’s post breaks down the plan into the good, the bad, and the unknowns.

In our opinion, aid focusing on direct payments, rather than price supports for soybeans, corn, and wheat, was very good news. Had the government stepped in with price controls, such as a guarantee for farmers to sell their soybeans for at least $10 per bushel, it would have created a headache for grain markets for years to come. The announced program will direct most funds to, essentially, supporting farm income without directly disrupting farm-level commodity markets.

On the surface, a $12 billion program sounds large. The challenge, however, is there will be many slices to cut from the pie.

In an interview after the initial announcement, Secretary Perdue revealed direct payments would be between $7 to $8 billion. $200 million would go to trade promotion activities. The balance, or $4 to $5 billion, would be for food purchase and distribution. These are the first slices.

Considering potential direct payments, $8 billion won’t go too far. The USDA currently has soybean production forecast at 4.3 billion bushels. Hypothetically, soybean payments of $1 per bushel would be more than half of the earmarked $8 billion. While we don’t know how much the USDA will pay for each commodity, it’s worth pointing out how fast a few billion dollars can go when trying to limit the impacts of a Trade War.

Finally, the biggest shortcoming of the program – and really any such program – was best summed up by Secretary Perdue said: “Obviously this is not going to make farmers whole.”

Our immediate reaction to the press release was that it lacked meaningful substance. With that in mind, here are the three big unknowns:

– How will the direct payments be made? Will soybeans be paid $0.50 per bushel produced, or $1.25? At this point, the program provides no measurable relief for producers as they can’t update budgets and financial projections to reflect expectations. Until the direct payment calculations are revealed, producers will have no idea how the aid will impact their farm.

-Timing? The USDA’s initial release also provided no information on the timing of payments. In addition to the magnitude of payments, farmers need to know when the payments will be made and how they fit into their cash flow needs.

Secretary Purdue said he expected “…check to go out in late September or October. As soon as they [farmers] prove their yields.”  This provides some clarity as the checks will likely come before 2019, but, again, the actual timing is unknown.

-What Happens Next? The one point that has been most clear about Trump’s Trade Aid is there is no intention of providing support beyond 2018. Measuring the hit to the ag economy at $11 billion, one has to wonder – should the tariffs and Trade War continue into 2019- what happens next? Will farmers get no support in 2019 even if the status-quo remains?

In a few months, farmers will begin to plan and budget for the 2019 season. While the 2018 aid will help farmers’ current financial situation, Trade War realities will, again, be obvious as 2019 comes into focus.

The USDA’s announcement of a $12 billion plan to aid producers in light of the Trade War is good news for producers. The best news, in our opinion, is the plan does not artificially support farm-level prices. However, there are numerous moving parts and challenges with the revealed plan.

Most of the problems center around managing expectations. While $12 billion is a large program, there are a lot of slices to be made from the pie. At this point, farmers can only speculate on how significant and timely any payments might be. Furthermore, it’s not clear when farmers will know the magnitude and timing of their specific payments.

It’s also important to note that while the current plan will be helpful, it won’t undo all the losses farmer face. For example, regions that are heavily reliant on export to China will likely face especially weak cash prices and, in turn, be impacted more than “average.”

Finally, while the 2018 plan will help the 2018 financial situation, 2019 will be here quickly and the Trade War’s economic realities will remain. Without a ‘new plan’ – which the administration has made clear isn’t likely- or an end to the Trade War, the $11 billion impacts will be in full-effect come 2019.