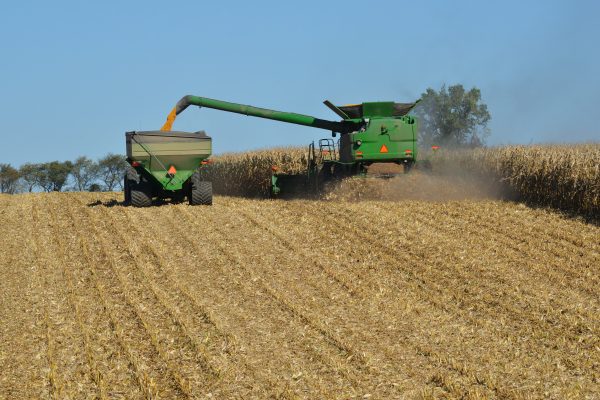 The USDA released estimates of national net farm income in late August. These results, the latest since February 2018, were closely examined given lower commodity prices and the ongoing Trade War. In this week’s post, we review the latest farm income data and what it means for the farm economy. 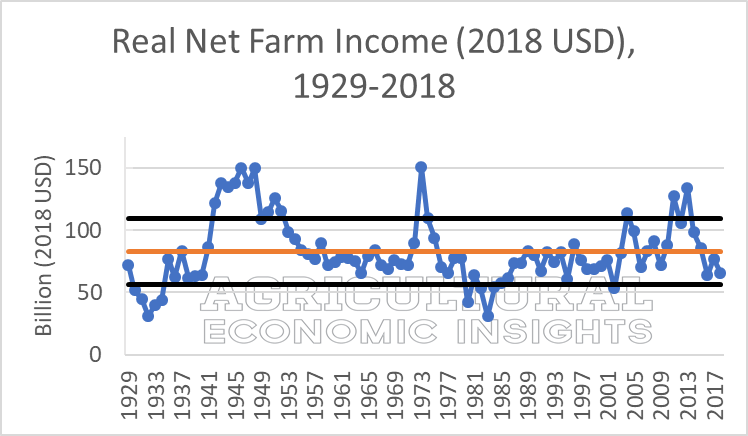 Figure 2 shows the same data in Figure 1, but since 1990. Also included, in red, are the USDA’s February 2018 estimates. The most evident change from February to March was an overall increase in the estimates. For 2017, the estimate was revised 19% higher ($12 billion). For 2018, the current estimate is 10% higher ($6 billion). All things considered, the USDA is indicating that the farm economy is in a slightly better place than expected back in February. However, even with the higher estimates, it remains a difficult farm economy. In other words, the current forecast is a slightly better outlook of a still difficult farm economy.

Changes from February also highlight how much these estimates can change over time. For 2017, additional costs of production and farm expenditures data likely created the largest change in the forecasts. Keep this in mind as we’ll be commenting about 2018 net farm income estimates for a least another year.

One data point that will be hanging for 2018 – in addition to the usual- are Trade Aid payments. The August estimates did not include those as the USDA wasn’t sure on the timing of this payments; 2018 or 2019 calendar year.

Finally, it’s important to consider the expected difference between 2017 and 2018. In February, net farm income was expected to fall $5.4 billion from 2017 to 2018. In August, this gap has more than doubled to an $11.4 billion drop in 2018. Given the USDA’s July announcement that the Trade War- and associated tariffs- has had an $11 billion impact to the farm economy, it leaves us to wonder where the farm economy would be in 2018 without the current political headwind. 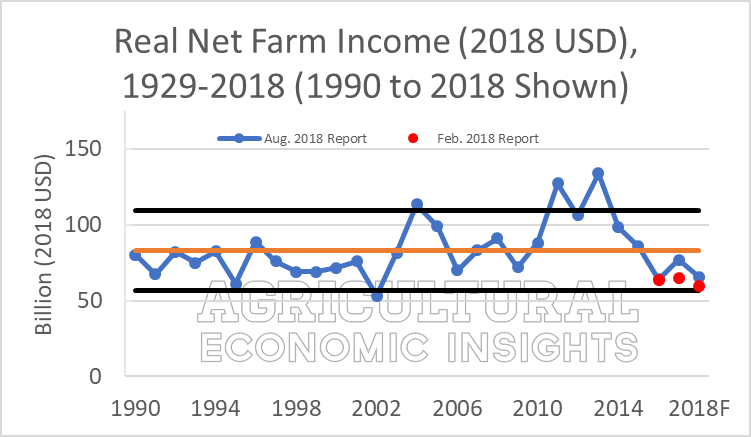 The USDA’s latest net farm income estimate has at least three key points to keep in mind. First, in our minds, the current farm income concern is more about the duration than magnitude. With levels dipping back to 2016 levels, farm financial conditions are likely to continue to erode. Second, while the current estimates are improved from February, this should be viewed as a slightly better outlook on a tough situation. Finally, the decline between 2017 and 2018 has more than doubled since February.

Looking ahead, net farm income for 2018 will be revised several more times into 2019 as commodity prices, production, and farm expense data are better known. One big piece will be the Market Facilitation payment – or trade aid. The timing of these payments will be key. Also, will the USDA decide to make a payment on the second half of production?  Should current conditions continue, we’d expect pressure to reduce production costs – farmland values, cash rents, etc. – to take place.

As has been the case for some time, it is quite difficult to put much of a positive spin on the current level of net farm income.  The data just make very evident that times have been far from good for a while.

The duration of this downturn is becoming more worrisome.  The longer that the downturn lasts, the more financial erosion that will take place.  It will be critical to carefully monitor farm financial conditions.  It is important not to become complacent about conditions that are “somewhat poor” but last for a long time.  Such conditions are very easy to overlook and can have a more significant impact than a sharp drop and quick recovery.  At the end of the day, some good news, perhaps on the trade front, would be very welcome and overdue.

The Farm Economy is Not All Bad…