Despite Market Facilitation Program Payments, Farm Economy Still Stuck in the Ditch. Can Positive Trade News Turn it Around?

It appears that there was finally some good news in the U.S.-China trade dispute (1, 2, 3, 4, 5).  Any positive news is certainly good news for those involved in agriculture.  To underscore how important it is, one just needs to look at the USDA’s most recent estimates of farm income and farm financial conditions.

In many respects, the Economic Research Service’s latest net farm income update didn’t provide much new information.  Rather, it only provided further confirmation of what almost everyone in agriculture already knows.  The farm economy is not good.  Despite ERS’s estimate that the U.S. will make $4.6 billion in market facilitation program (MFP) payments, net farm income is forecast to fall 12% from 2017 to 2018. 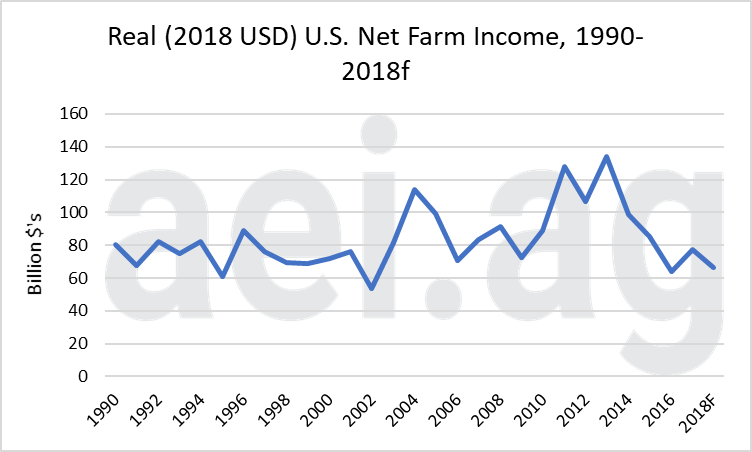 Were it not for the roughly $4.6 billion estimated to have been paid under the MFP program, 2018 would have roughly equaled the level seen in 1995.  Inspection of the graph shows that the net income levels of the last three years are consistent with the bottom end of the range experienced throughout the 1990’s.  These were not generally good times in agriculture.

At $93 billion it has fallen by 43% from its 2012 high.  However, unlike net farm income, its current level would place it in the upper end of the cash incomes generated in the 1990’s.  The reduction in net cash income has had substantial implications for the health of the agricultural economy.  Those most important of which is the rapid decline in the financial health of U.S. farms. 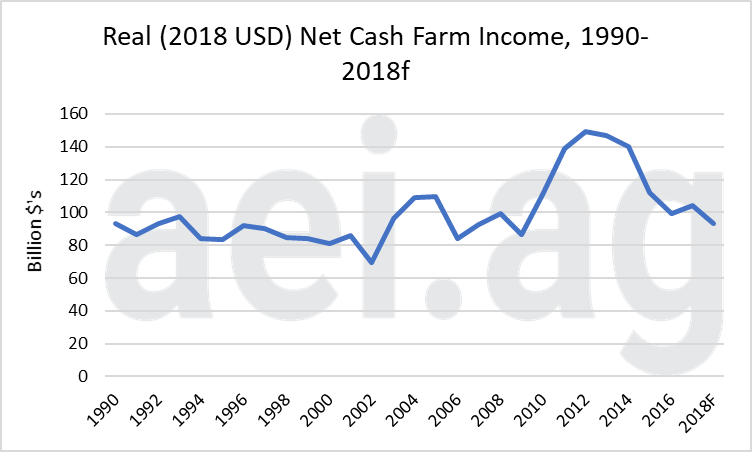 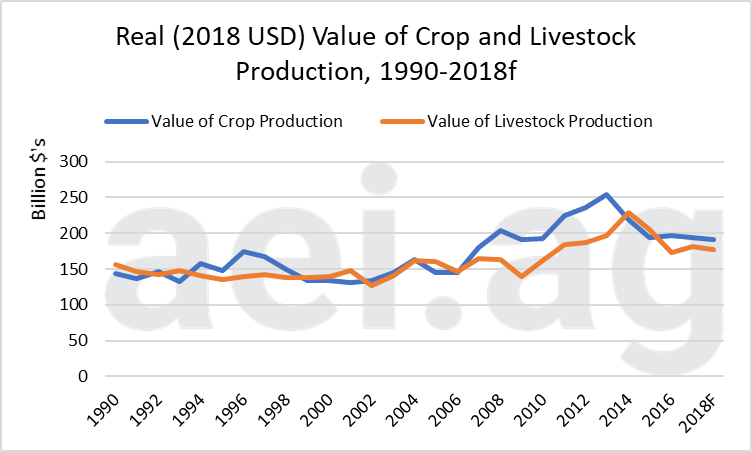 If you were to ask me to sum up the situation in the agricultural economy in one graph, I think that I would probably choose Figure 4 which shows the working capital position in the sector.  The declines in working capital at the sector level have been dramatic.  The overall decline in income has manifested itself in much lower levels of liquid cash reserves.  Working capital is now at a level that clearly needs replenishment. 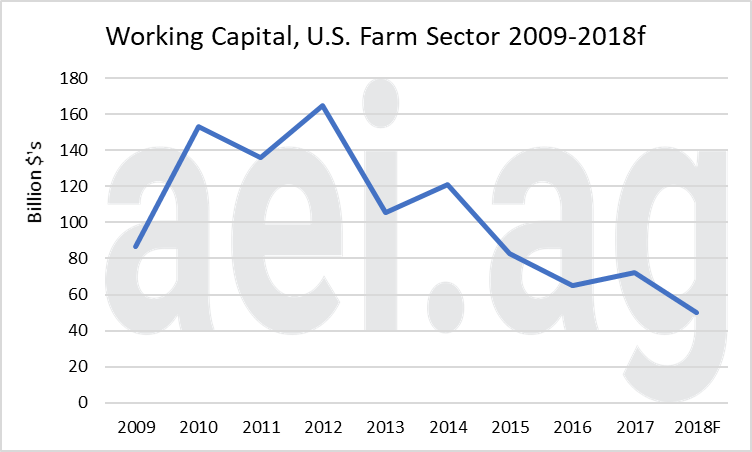 The most desirable way to rebuild working capital is to increase and save cash flow generated from farm operations.  However, declines in commodity prices have made doing so quite difficult.  Instead, it appears that farmers have tried to maintain working capital through financial restructuring.  Based on our earlier analysis of trends in debt use, it appears that farmers have aggressively added debt, in particular land debt.  In addition, they have substantially reduced their non-farm financial asset holdings.   There is clearly a limit to how far these trends can be pushed and it would be highly beneficial if it were possible to increase operating profitability.

The news of positive developments in U.S. and China trade relations comes at a good time.  Despite large market facilitation program payments, the financial situation in agriculture has continued to worsen.  At this point, it is important to see the financial situation stabilize and improve.  Without increasing receipts it will be difficult to generate the kind of improvement that can bring back better times to agriculture.  It remains to be seen if resolution of the U.S.-Chinese trade dispute will be enough to do so, but we can be confident that it can’t hurt.  Hopefully, the most recent news is an indication that things are moving in the right direction.