Is the World More Reliant on Ag Trade? 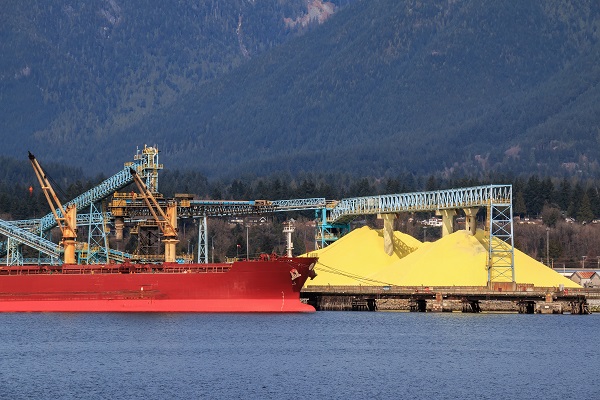 Trade has been noted in nearly every ag story written over the last few months. With attention on China and soybeans, we wondered about global ag trade trends and if the world has become more reliant on ag trade over time. Specifically, this week’s post considers global imports of corn, soybeans, and wheat over nearly 60 years.

Figure 1 shows corn, soybean, and wheat imports for all countries (million metric tons). As one might expect, this has trended higher over time. Soybeans, for instance, has had a rapid rate of increase in recent years increasing from 54 MMT of total imports in 2000/2001 to 152 MMT for 2018/2019. The nearly tripling of soybean imports over the last 18 years is equal to an average annual growth rate of 6.7%. Over the same period, imports have grown more slowly for corn (4.7%) and wheat (3.5%). 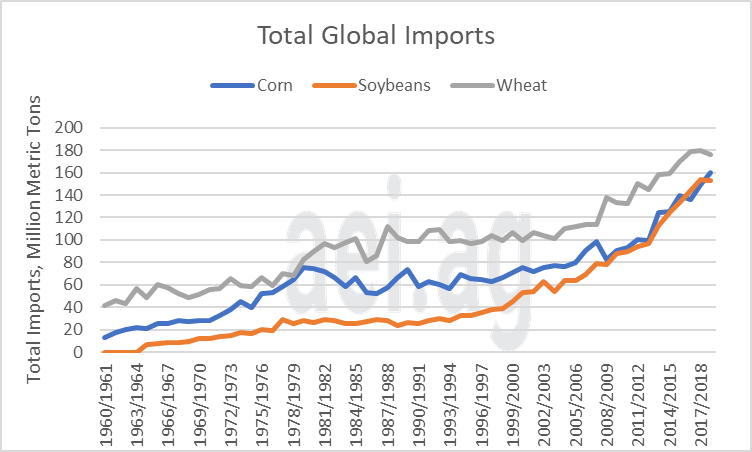 These data tell a different story than figure 1. First, the global trade of these crops vary. For the 2018/2019 marketing year, corn imports are expected to account for 14% of consumption. This is much smaller than what is seen for wheat (24%) and soybeans (43%). While the data in figure 1 might imply the importance of trade is similar across these crops, figure 2 – which accounts for consumption- shows trade is much more significant for soybeans.

Wheat imports have stayed in a tight range of observations over time, between 15% and 25% of total consumption. Currently, wheat imports are on the high-end of this range.

Overall, the conclusions reached from Figure 2 are different from Figure 1. For corn and wheat, there has not been a large change in the share of global consumption reliant on trade (imports). Corn imports today represent a smaller share of consumption than observed in the early 1980s. Wheat imports, while higher in recent years, are in line with observations from the 1960s.

For soybeans, increased reliance on trade (imports) is more clear. After peaking in the 1970s and retreating into the 1990s, soybean imports as a share of consumption have trended higher since the late 1990s. 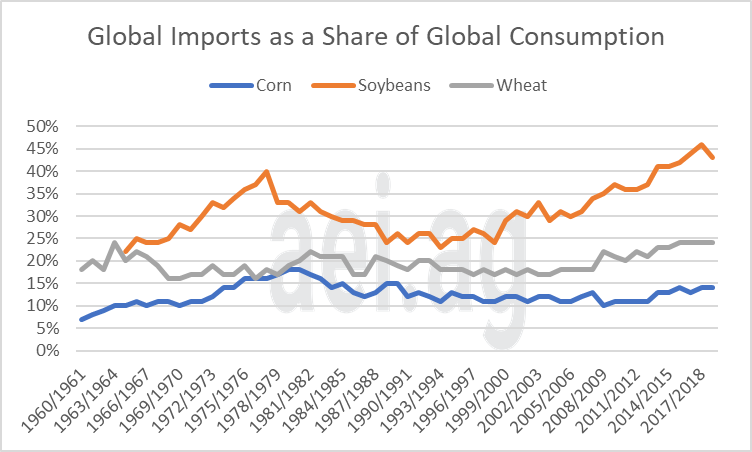 When considering global trade, keep in mind the data that are used. Global imports (tons imported) on their own have dramatically increased over time (figure 1). In reality, though, a lot of that upswing is attributed to inflation-like effects; general uptrends in consumption, population, and production. When considering total imports as a share of total consumption (figure 2), very different trends emerge. To answer the question of if the world is more reliant on global trade, one needs to consider the crop. For corn and wheat, it is hard to argue the world is more reliant on trade today than in the past.