A Quick Look at the Difference in State-Level Soybean Prices 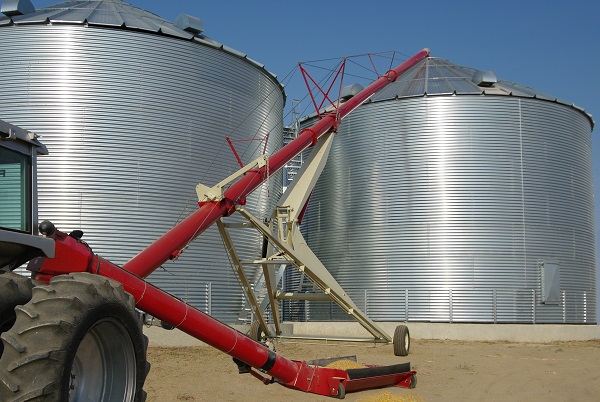 While the soybean to corn price ratio deservedly gets a great deal of attention, people rarely discuss how prices differ across the country.  Instead, we often simply look at the ratio of November soybean futures to December corn futures prices.  While this is an interesting metric, it obscures the considerable variation in cash prices across the country and how planting signals might vary from region to region.

Where are Prices Highest?

Of the states and dates that we examined, IL was home to the highest average soybean cash prices. Not surprisingly these are the largest soybean producing states in the U.S.  Iowa was the second largest producing soybean state and soybean prices in Iowa were slightly lower than those in Illinois.  The difference between Illinois and Iowa monthly cash prices is shown in figure 1. 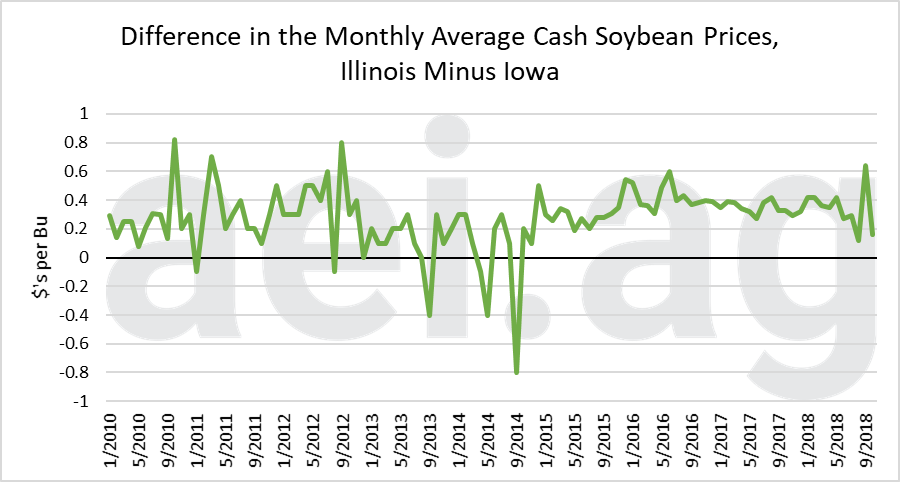 Taking a look at the Dakotas

As we discussed earlier, the Dakotas have seen tremendous growth in soybean acreage in the last decade.  There have been many anecdotal stories about the wide soybean basis in the Dakotas, so we decided to compare prices to those found in Illinois.  Figure 2 shows the cash soybean prices in South Dakota (blue line) and North Dakota (red line) versus those in Illinois.

The graph makes clear the wide differences in price that producers in these states face relative to Illinois.  On average the cash soybean prices in North Dakota were $0.79 per bushel less than in Illinois.  South Dakota prices were usually a bit better, but still averaged $0.63 less than Illinois. 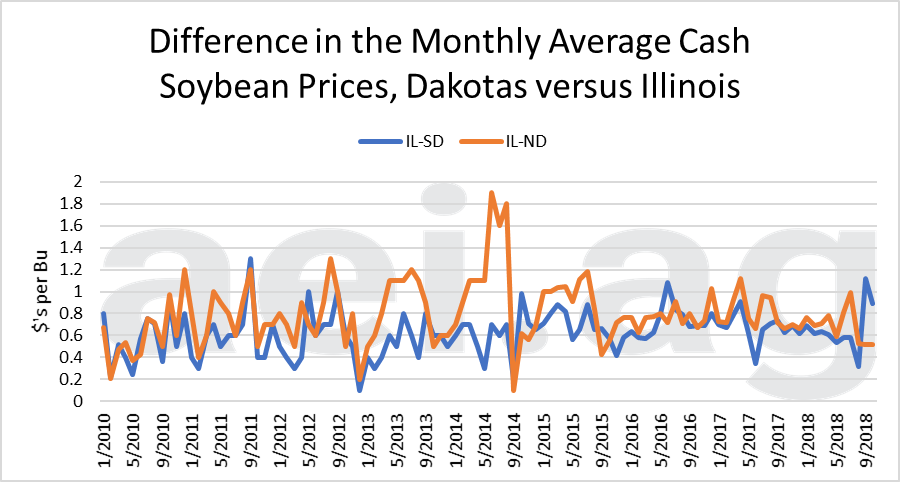 Kansas and Minnesota were also states that we identified as having a tendency for large soybean acreage changes.  On average Kansas soybean producers received $0.35 less and Minnesota soybean producers received $0.41 less than those in Illinois.  However, you will note that much of the reason that the average prices in Kansas were closer to Illinois goes back to the 2010-2011 time period when Kansas prices were higher than those in Illinois.

Late in 2018, the relationship has changed significantly, with Minnesota producers enjoying prices much closer to those in Illinois.  As of October, cash prices in Minnesota were nearly $0.70 higher than those in Kansas. 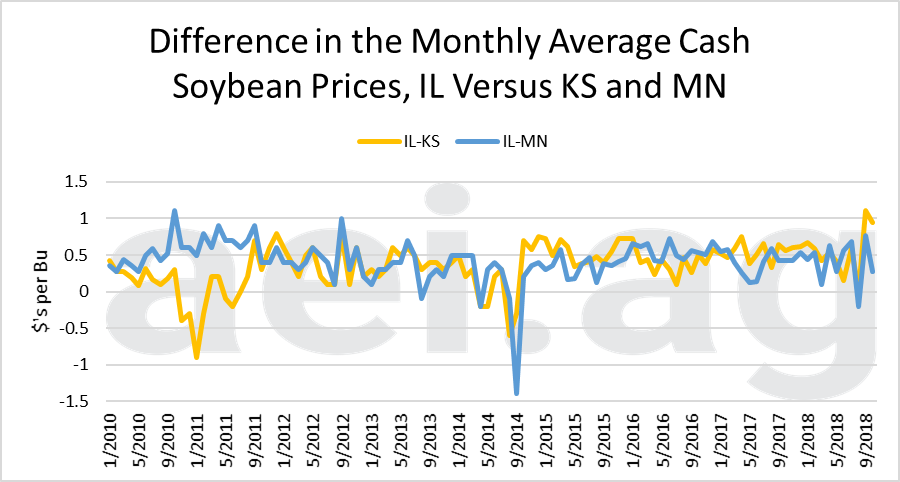 When thinking about soybean acreage changes it is important to consider not just the overall soybean/corn price ratio, but also how cash soybean prices vary across the country.  When looking among the major soybean producing states, Illinois farmers tend to enjoy the highest cash prices, whereas farmers in the Dakotas experience some of the weakest cash prices.

The incredible growth in Dakota soybean acreage has come despite cash prices that are much lower than those in the Central corn belt.  One has to wonder whether cash prices are now approaching levels that will deter producers in the Dakotas from planting soybeans. In Kansas and Minnesota, cash prices were much closer to central corn belt prices.  However, there has been a recent divergence in Kansas with prices falling $1.00 per bushel below Illinois levels.  It is difficult to know whether this will persist, whether it is a short-term phenomenon, or how it might be influenced by the current trade war.

We are now roughly one-third of the way through the crop insurance price discovery period.  As of Feb 10th, the corn price guarantee stood at $4.03 and within pennies of last year’s $3.99.  Soybeans are now $0.57 lower than in 2018.  As we head toward planting we would expect that such differences will begin to swing the needle toward more corn and fewer soybeans.