A few weeks ago, the USDA’s median farm income estimate captured significant attention as it was prominently cited as an indicator of a difficult farm economy. While compelling on the surface, this statistic is quite tricky to use as a measure of the farm economy. This week, we’ll review the USDA’s median farm income estimate and what we can learn from it.

The median is the middle value of an ordered dataset. In the context of farm income, the median tells us the level of net farm income 50% of producers earned less than, or more than.[1]

For 2018, the USDA estimated median farm income at -$1,548. Again, this tells us that 50% of U.S. farms had farm incomes less than this. On the surface, this is a quite shocking number.

Figure 1, however, shows median U.S. farm income over the last 5 years. While this measurement has trended lower, the most significant observation is that median net farm income has been negative in each of the years considered. Even in 2013, as total U.S. net farm income peaked, median farm income was negative. It’s always important to consider the base rate.

To understand how this happens, we must consider the structure and demographics of U.S. farms. 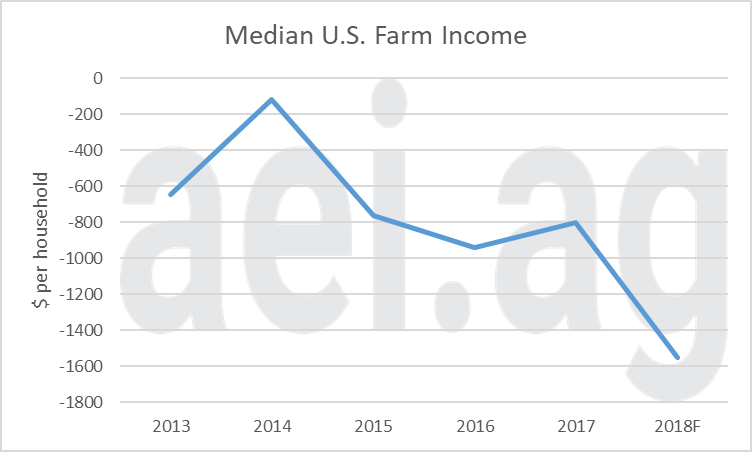 Figure 2 shows a couple of pieces of data. First, average farm household income is broken into on-farm (blue) and off-farm (orange) income. Second, the share of total farms that each farm type (residence, intermediate, and commercial) represents is scaled along the horizontal axis.

Residence farms, which account for more than 50% of all farms, are retired or have a primary occupation other than farming. In 2017, average on-farm income for residence farms was negative. In fact, low or negative on-farm income is common for this group. As a result, this segment is dependent on off-farm income.

The second group, intermediate farms, are primarily engaged in farming with less than $350,000 in gross cash farm income. This segment accounts for 38% of all farms. This group is also reliant on off-farm income as on-farm income is relatively low, less than $8,000 in 2017. 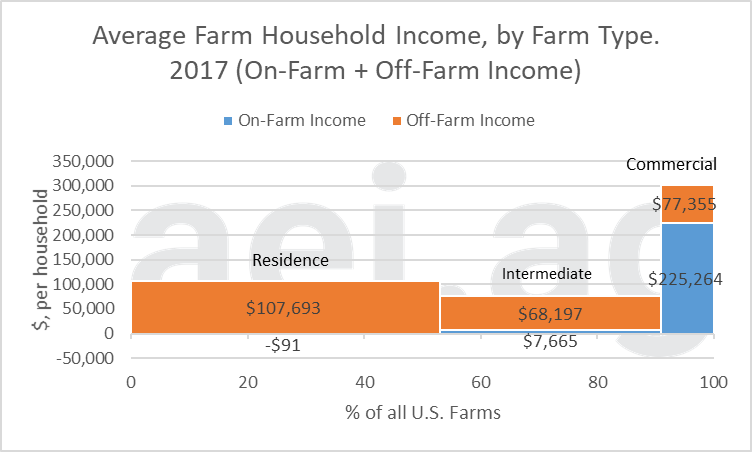 The data for commercial farms in figure 2 raises another point. First, the average on-farm income for this group has trended lower since 2013, when it reached more than $310,000. This is a 28% decline in five years, a substantial contraction.

Second, even though this segment, as a group, reported on-farm profits in 2017, this measure, again, doesn’t capture the full story. From these profits, many farms must cover family living expenses and debt obligations. For many commercial farms, the question isn’t whether they are profitable or not (per the USDA’s measure of farm income), but are they profitable enough?

In 2017, the USDA estimated commercial farms, on average, had annual debt obligations (interest and principal) of nearly $93,000. As commercial farm income contracted in recent years, annual debt service requirements trended higher. From 2013 to 2017, annual principal and interest payments have increased by nearly 38%.

It’s always difficult to capture the magnitude of financial challenges in the farm economy. Each measure has its advantages, insights, and shortcomings.

Median farm income by itself, and without context, is a poor measure of the farm economy’s health. This is because a majority of producers rely heavily on off-farm income. In fact, most farmers are classified as residence farms– which are retired or have primary occupations other than farming. These segments skew the results and leave median farm income always low or negative. Median farm income is perhaps a measure that best describes the structure and demographics of U.S. farms, rather than the health of the U.S. farm economy.

Even when considering average farm income by segment, the full story is not captured as the issue of debt service remains. Farms not only have to be profitable, but they need to be profitable enough to service debt obligations.

In summary, the farm economy slowdown has created financial stress for farmers across the U.S. The magnitude of financial stress varies significant across farms, and no single measure can fully capture that impact.

[1] The average, or mean, of a dataset is a much more common statistical measurement. The median, however, is insightful as it gives us an idea of the distribution of farm income across all farmers.

[2] Residence Farms – Less than $350,000 in gross cash farm income and principal operator is either retired or has primary occupation other than farming.