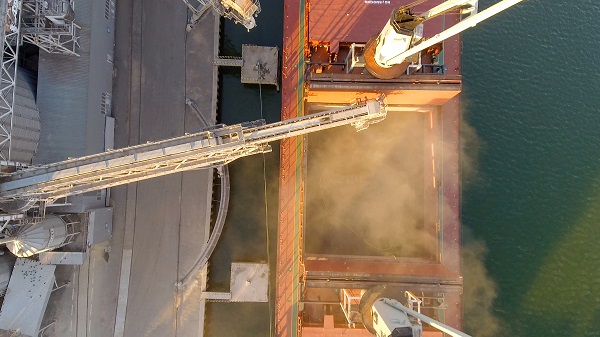 Late in February, rumors of China agreeing to purchase an additional $30 billion per year in ag products as part of a trade deal circulated widely (here, here, here). This sounded like a big number, but our frame of reference is usually around bushels traded with China, especially soybeans. The $30 billion number was a bit ambiguous to us. In this week’s post, we try to understand and size-up a potential $30 billion trade deal with China.

What is the Base Rate?

The first question is “how much is $30 billion?” Figure 1 shows the value of annual U.S. exports to China since 2000. In recent years, the value has been between $20 and $25 billion annually. The slide in export activity from 2012 to 2017 was largely driven by lower commodity prices. Keep in mind the value of exports is impacted by price and quantity, making it a tricky measurement for comparing annual activity.

If one uses the $20-$25 billion range of trade from 2012 to 2017 as the base rate for a potential commitment, an additional $30 billion in annual ag purchases looks very significant.

As a result of the Trade War, the value of ag exports to China fell by more than 50% in 2018. At $9.2 billion, 2018 was the lowest value of trade since 2007. If one uses 2018 as the base for any trade commitments, $30 billion is less significant, but also more tangible. For starters, an agreement to purchase an additional $10 billion over 2018 levels would be necessary to return to pre-Trade War activity. This is an important detail to keep in mind 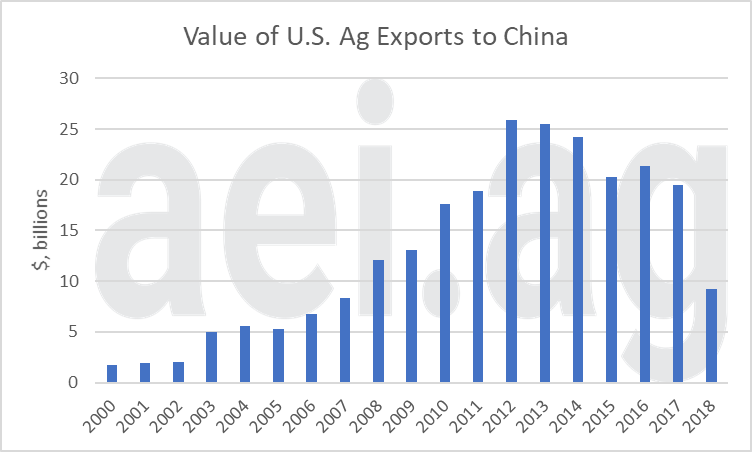 The second consideration to keep in mind is timing. Specifically, how long of a timeframe would any purchase commitment be given to play out? Would the commitment take place immediately, for the 2019 calendar year? Or over a 5 to 10-years? The timeframe would have very different impacts. With that in mind, we should consider how trade with China has grown over time.

From 2000 to 2017, China’s purchases of U.S. ag export grew at a 15% average annualized rate of growth. A rate of growth that large means exports roughly doubled every 5 years (rule of 72).

Consider this scenario, if China promised to purchase an additional $30 billion annually above 2018 base levels ($9 billion), the total commitment would be roughly $40 billion, or double 2017 levels. Using the historical annual growth rate of 15%, reaching $40 billion from 2017 levels (or doubling from $20 billion) would occur in about 5 years. Under this scenario, a $30 billion commitment would really be nothing more than a combination of creative counting and projecting historic growth into the future.

In 2017 – before the trade war- total trade with China was $19.5 billion (Figure 1). Soybeans alone accounted for $12.3 billion of that total – or 63%. Given the U.S.’s trade portfolio with China is heavily weighted to soybeans, one naturally wonders how a potential trade deal might be allocated across commodities. It’s hard to imagine a majority of additional purchases coming from soybeans.

A fourth consideration is how might a potential trade deal with China impact total U.S. ag trade? Figure 2 shows the value of all U.S. ag exports since 2000. In 2018, total U.S. exports were valued at nearly $140 billion. $30 billion in new trade for U.S. ag would be more than a 20% increase.

Any announced trade deal will need to consider how commitments will be realized. There is a difference between new Chinese purchases versus a re-allocation of existing purchases. The value of all ag exports (figure 2) will be an important measure to monitor over time. 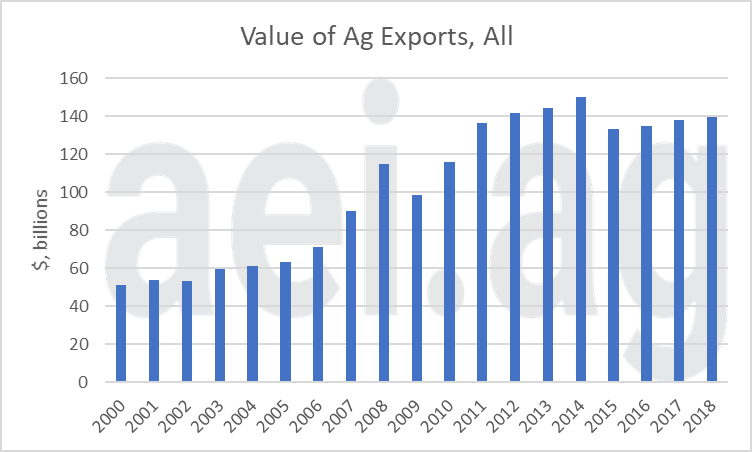 As trade negotiations with China move forward, and a potential deal being reached in late March or April, we believe there are four key questions to keep in mind with any potential announcement:

(1) What is the base rate (level) that additional purchases are promised from?

(3) What commodities are included?

Take the rumored commitment to purchase an additional $30 billion in ag exports annually. Ground-truthing that figure has a wide potential range of implications after considering the four outlined questions. In one scenario, using a low base rate ($9 billion), historic growth rates (15% annually), and enough time (5 years, or so), $30 billion could be viewed as a perpetuation of the pre-trade war status quo. Furthermore, one could argue that a $10 billion trade deal with China would be needed to just undo the trade war.

Farm Income in 2019 Forecasted to Improve…