While 2019 crop insurance revenue guarantees for corn will be similar to 2018, producers will be facing higher fertilizer prices in 2019. This week’s post reviews the USDA’s latest Illinois fertilizer price data and the implication for producers this spring.

Figure 1 shows recent fertilizer prices as well as spring 2018 prices. Specifically, spring 2018 is the average of prices reported in the months of April and May, while the recent data are the average for February and March 2019. 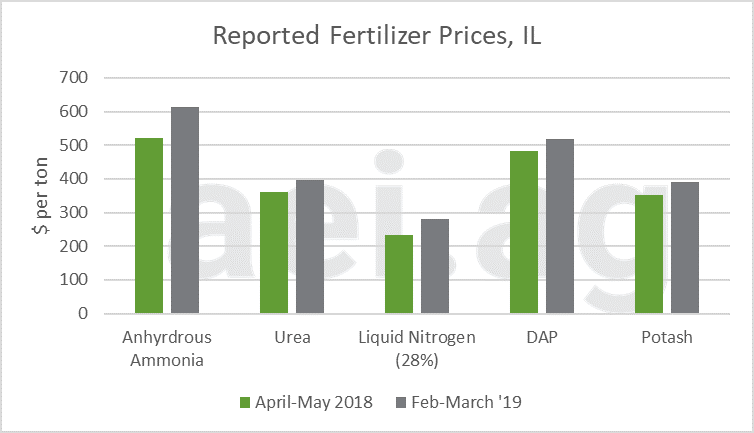 Stepping back, figure 2 shows the prices trends for anhydrous ammonia, DAP, and potash since January 2015. First, notice current prices are lower than those reported in early 2015. Anhydrous ammonia, for example, was nearly $750 per ton that spring.

Second, notice that prices for these products are also above their recent lows. Potash prices briefly dipped below $300 per ton in mid-2016. DAP reach a low of more than $400 per ton in early 2017. In the fall of 2017, anhydrous ammonia briefly fell to $400 per ton. This is all to say that – at least for now- the days of low fertilizer prices might very well be behind us. 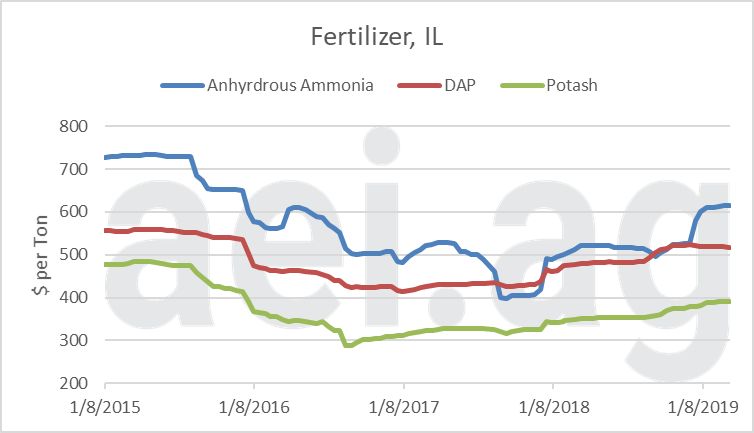 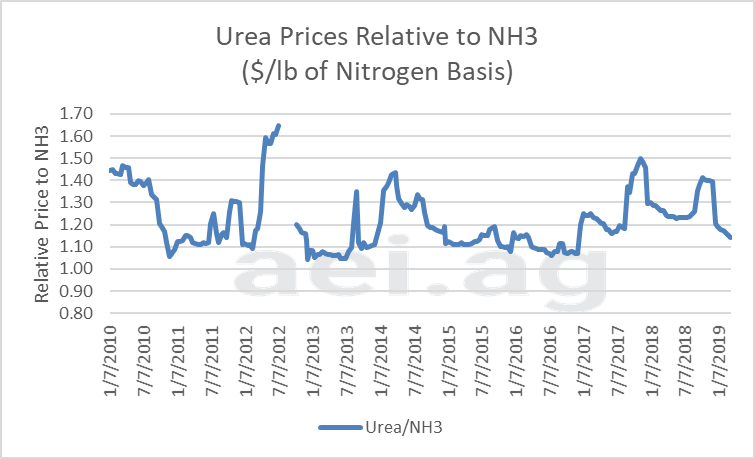 How have the price upturns impacted crop budgets? Figure 4 shows the estimated corn expense for a fertilizer application rate of 180-70-70 (using anhydrous ammonia as the nitrogen source).

Lower fertilizer prices were an important source of crop budget improvements as commodity prices and farm incomes turned lower. While current prices remain much lower than the $160 per acre expense reported in 2011, 2012, and 2013, the turn higher in 2019 is not good news for a farm economy struggling with persistently low farm income. 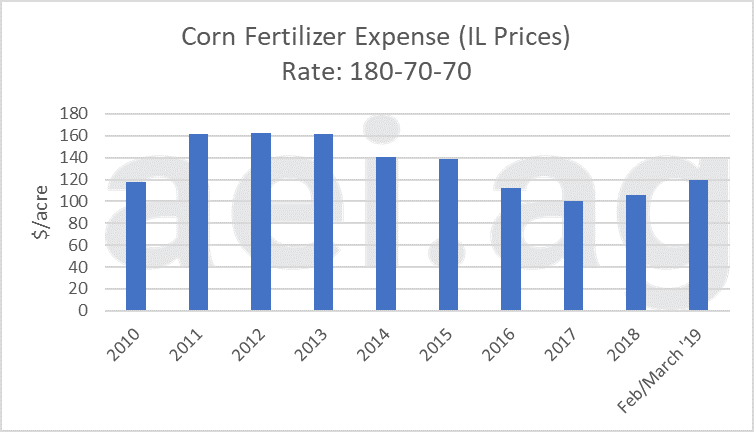 Producers finalizing plans for 2019 will be disappointed to find fertilizer price have turned higher. Even though corn’s crop insurance revenue guarantee will be similar, estimated fertilizer expense will be $14 per acre higher than in 2018.

Producer able to use alternative sources of fertilizer should evaluate urea for 2019. The current price relationship between urea and anhydrous ammonia shows urea prices – relatively speaking- are more attractive in 2019 than in recent years and when compared to the 10-year average.

While fertilizer prices are considerably lower than 5 to 7 years ago, the uptick comes during a challenging financial time for producers. Fertilizer is a large expense category that is going in an unfavorable direction for producers. Furthermore, the latest fertilizer price data makes us wonder how the USDA’s early 2019 forecasts of net farm income will fare given the estimate of lower costs of production in 2019.

Sizing up a Potential $30 Billion Ag…

Debt Levels vs. Interest Rates: Which is…